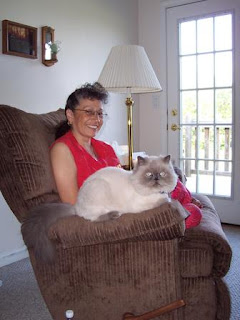 I'm sure you heard of this story yesterday if you had any sort of media - it was on the news, on the radio, on "Regis & Kelly" -everywhere was a story about this cat that lives in a nursing home that seems to know when someone is going to pass away. Apparently, this cat will go into a room, curl up with someone & within the day, that person passes away. It has happened over 24 times so its not like it was a fluke of some sort. Now, the ongoing joke was, when the nursing home residents saw this cat come up to them, they just had a heart attack because they were scared to death.
The news of this didn't surprise me in the least! Have you noticed animals & their sense of things we dont see? I've told the story many times about how Steph's cat, Hercules would not leave her side. This cat is just like any other cat - he will ALLOW you to pet him on his terms, not just the kind to hang out & enjoy company. When Steph was in her final weeks, this cat got on her bed & wouldnt leave! Even with all the visitors coming over, he would never leave Steph's side - when normally if a visitor would come over, Hercules was gone only to be seen once the home was filled with the "normal" people. At one point, when it was time for Steph's medicine, her bedroom door opened & out came Herc as a reminder for the medicine doses - how the door opened for him? I dont know - we just cracked up wondering how he managed that one! When someone would put him out & shut the door, Hercules would cry out until he could get back up & curl up in a ball at Steph's feet.
The day Steph passed away, Hercules was on that bed - & the minute she left this world, Hercules got up, walked out of the room & went back to his bed. He had that sense to him like, "My job here is done". While we waited for the coroner to come, Hercules never even got back on the bed - he knew she was no longer there. Isn't that crazy how they sense things?
For those of you that have pets, dont you see that they notice when you aren't feeling well, or even when you're sad? I was home sick from work last Friday, & one of the things tha 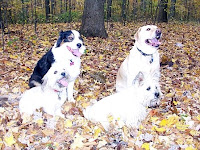 t made me feel a little bit better - I got to lay on the bed & was surrounded by my four dogs who can sense something's wrong & just want to snuggle as a way to make me feel better - it works!

One part of their sense that drives me nuts though - whenever I am home alone, they seem to look down the hallway & bark like someone is standing there. Why dont they do that when Ricky's home? I think they sense it aggrivates me & that's just a tad revenge for not giving the treats they prefer! (hehe)
What do they see - what do they feel - how do they sense these things? I guess I just chaulk it up to another one of God's wonderful creations!