* Shocked... heartbroken...sat with my jaw dropped... sat with tears in my eyes.  I couldnt believe the events of the day.  Watched news stations all night & seeing news reporters choked up & not even able to speak at times, showed how heart breaking this really was.... Dont think we'll ever really know why this happened...

* wrapping presents with the news in the background... just makes you realize what is important at Christmas... loving the ones you have with you.  With every present I wrapped, I thought of the parents who had already bought presents for their child.....  I just stopped wrapping for the night...

* Had a bright moment in the day... my parents brought me my Christmas present early so I could use it.  Its a painting I saw the other day.  Its of Santa holding baby Jesus... I just LOVE the look in Santa's face - his gaze looking at Jesus.  On the back, is the most beautiful poem.  I'll post it here on Christmas Day.  This painting is HUGE ... makes my living room look PERFECT for Christmas Day... Is there anything wrong with keeping a picture of Santa up all year long? 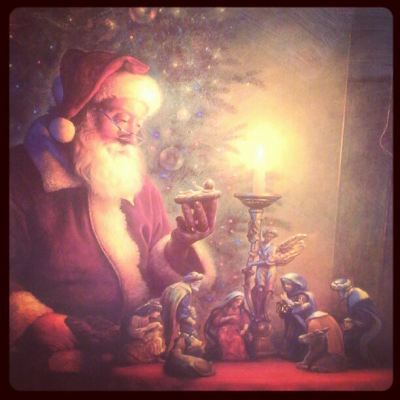 * Actually took it easy... with the Hubs not feeling good, we just hung around the house watching his fever since it was his work's Christmas party later that evening.  The one day we SHOULDNT be at home relaxing, with all the Christmas stuff we still need to do, we're at home.  What a mixed up life.

* Christmas Party...thankful that the Country Club had lots of vegetarian options

BE WARNED... these next 2 posts are DISGUSTING!!!

* Get home & Bruno throws up in the kitchen.  What's so disgusting about that, besides puke being involved.  WORMS!!! WORMS IN HIS PUKE!!! ... not white roundworm looking things, but wormy worms.  I immediately go to my doctor, Dr. Google, & find out what's going on.  He wasnt acting sick in any way.  What I found out, it looks like its a worm that is formed in the stomach when a dog eats animals or BUGS... BUGS...

* So remember when I said we had a few crickets in our basement?  I noticed Bruno kept going downstairs.  He's a fat dog.  He doesnt put forth effort in any shape or form, so why he kept going downstairs, I didnt know.  But when I read 'bugs', it hit me.  We ran downstairs.... opened up the door..
...ready for this...
there were at least THOUSANDS OF BUGS that fell from our door frame... THOUSANDS OF BUGS!!!!! falling out of the curtains, crawling around the door frame.  We opened the doors & they just fell like a waterfall.... ARE YOU KIDDING ME??!?!?!?!?!?!?
It was like a nightmare.
We ended up cleaning up these bugs with a vacuum hose, roach killer (all we had) for over 2 hours!
We got it all cleaned - not one bug in sight, close the door, & you'd see bugs crawling back through. WHAT? HOW?!?!?! .... these things are straight from the pit of Hell!
After midnight, we finally got it where we didnt see any bugs for 5 minutes straight. That was a success....

* I found an online concoction of mixing water with Garlic powder to deter the bugs... big mistake... our house smells like an Italian restaurant!!!!

* Woke up to a basement full of dead bugs... about 50 came back through, but they were all dead.  I guess the Roach spray worked.  (We're still spraying every few hours to make sure these babies are DEAD)

* Lunch, I had something called "Spasanga" from Cheddars. Oh.my.word.  I guess the smell of Italian made me crave something pasta-y.  This thing was amazing.  & we had the best waitress I think we've had in a long time.  I actually went & found the manager of the place when we left to tell him how great she was.

* The Hubs was still feeling off, so stopped & got him some Pepto & he went to bed... I wrapped presents some more

* Real Housewives of Atlanta... Kenya is insane.  & I love Phaedra every time I watch it.

* Totally forgot Survivor Finale was on... dang it... caught the end.  I really had high hopes for Lisa.  But happy Denise won.  She was one heck of a strong lady!