* Got home & snuggled on the couch to watch "Bridesmaids".... now, I've had this DVD from Netflix for literally over a year.  No joke.  I bet they just gave up on me returning it & thought, "we'll just continue to charge the monthly rate" - but HA!  I finally watched it! .... it wasnt what I expected either.... but will say, the "trying on dresses" scene had me wanting to puke & laugh all in one

* Another fun night of Tetris Links with the Hubs

* Woke up to this 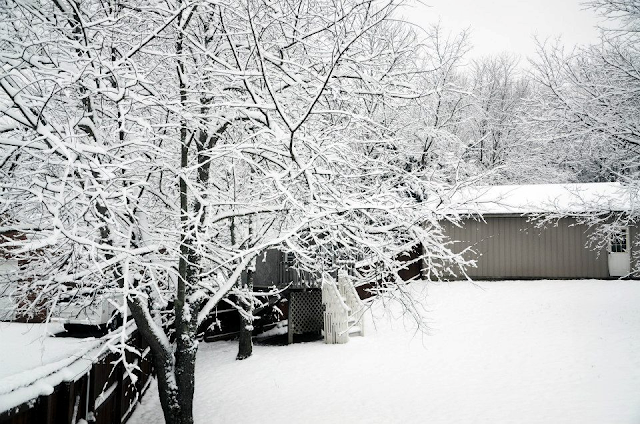 * Made some Banana bread... got to lick the bowl too (best part of baking)

* Had my obsession with David Tutera fulfilled.... I can watch "My Fair Wedding" on constant loop.  The one with Rachael & Brendon from Big Brother was on.  That girl is COOKY!! Love that Mr. Tutera can put her in her place :)

* Called in for pizza & watched Harry Potter & the Goblet of Fire... yep - a great easy day

* Woke up to being another day older... I guess every day is like that really - but birthdays MARK it.

* The Hubs made me breakfast in bed - isnt that cute!  But I went in to get something to drink & was totally surprised.  He had me flowers, a card, a HUGE cupcake & a singing balloon on the counter.  We didnt leave the house the day before so couldnt figure out how he did it - he went out at 4:30 am to the store.... now that's love! 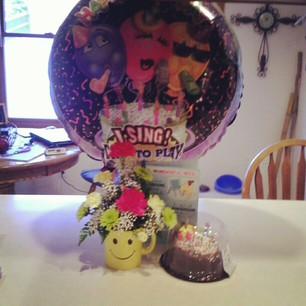 * He had me peek outside & see what else he did in the dark.  Across our yard was "Happy Birthday" in the snow!  Perfectly stomped out too :)  I told him I've giving him props for originality!  That's also love - stomping in snow before the sun rise in 18 degree temperatures. 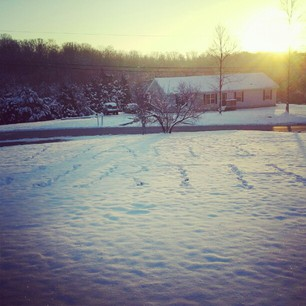 * Even my watch surprised me with a birthday wish... kinda creepy when your gadgets wish you happy birthday 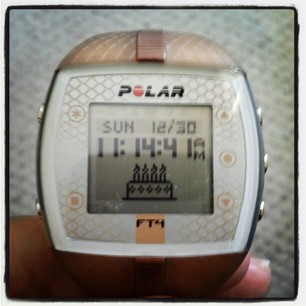 * The Hubs took me out & spoiled me rotten today.  We went to Kohl's & he bought me 3 new sweaters & some red sparkly house slippers.  Dorothy would just die for them.

* Left from Kohl's to have lunch in one of my favorite places...

* Left from there & the Hubs took me to go get fitted for running shoes.  I've ran for 6 years now & have never had my feet looked over for the right shoes.  Had no idea one foot is a size 8 & the other is a 8.5... & then even more confused why they put me in a size 9.  But they feel great.  They had me run up & down the side walk in a few pairs to see how they fit & to watch my ankles to see if they rolled.  ...... it wasnt fun running with someone watching right after I ate.  I wanted to barf..... but got the BOMB DIGGITY SHOES EVER!!! 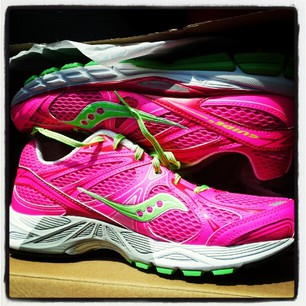 * Met some friends at the movie theater... LES MISERBLES... OH MY WORD!  I enjoyed every minute of the almost 3 hours.  It flew by!  It was everything I thought it would be.. & more...  I will say, the singing in some parts arent like the play quality - but it fit in the movie.  Hugh Jackman is amazing... I seriously cried in 3 good parts & SOBBED in the end.  I didnt feel too bad because I had a friend with me sobbing as well... but had another friend on the other side laughing at us sobbing :)
I even made myself laugh because I was sobbing so hard, my chest was doing that funny skipping thing... THATS how hard I cried... but I LOVED it...
want to go back & see it again

(Ricky got lucky - all the husbands wanted to go see another movie - so they went & saw the Tom cruise movie... they got out of the musical goodness... but Ricky will see it - I'm sure of it)

* Went & celebrated Christmas with our friends Chasity & Ryan... we had to wait until after Christmas because I had gifts for her that had to wait until she opened her present from her husband :)  I love sneaky stuff... but it was so wonderful spending the evening with these two.  They are just so special to Ricky & I both.  (I'll have to take a picture of what they made for us for Christmas... so awesome)

Now back to work.
Today is probably my most hectic, stressful day of the whole year....
so I'm off to work...
Everyone be safe tonight!!!