The night a UPS driver ruined Christmas spirit in our house...

Who knocks on the door at 9pm at night?

Only things is an emergency, right?

Or we can go with what is more my line of thinking? A killer.  A polite killer, grant you, if he's going to knock on the door.  But still. It can happen.

Hasn't anyone seen those videos on TV lately where someone pretends they are a UPS person & knocks on the door & as soon as its opened, 3 people run in with guns behind them robbing you & basically being the Grinch taking all of your gifts?


YEAHHHHH... me too! I saw those videos!

So again, when there is a knock at my door on a Monday night at 9pm & Harvey Dent is freaking out, I get nervous.

Honestly, I think he needs some sort of intervention happen with his addiction of their sweet tea & chocolate chip cookies.  Or as I tell him the way he should order, "Can I get a large cup of sugar with a side order of sugar?"... & Ricky & all the good southern people say, "Amen"

I glance out the window, see a UPS truck, which still doesn't make me trust that this is a legit UPS guy.  Murderers are clever nowadays & you can never be too careful.

I tell him someone is at the door & he looks at me like I have 3 heads.

Now, its true, he can't see very well in daylight on a good day so coming out of a deep sleep, he probably did see me with 3 heads.

But then he hears Harvey barking & he bolts up.

Can I take a minute & applaud Ricky on his skills of snapping out of sleep so fast.  He really is good at it.  Even though, 5 minutes later, he's usually grasping his chest & saying his heart is beating crazy & he feels like he's ready to have a heart attack. ... maybe not so good after all.

But he runs to the door - no worries in his mind if anyone is going to home invade us - he just wants his package & then he sees the UPS guy turning his big brown vehicle around & getting ready to head down our drive way.

Just note, our drive way is fairly long... & goes on a downhill slope.  The UPS driver gets turned around just in time to head down that hill when Ricky starts YELLING - "HEYYYY!!! HEEEYYYYY!!!!!"

I bet you the UPS driver was cranking up some crazy rock or something in that vehicle because he didn't hear Ricky... who again was REALLY awake now running down the driveway with no shoes on & its just a crisp 36 degrees outside.

Ricky makes it all the way to the street as the UPS guy pulls on the road & hits the gas. #pedaltothemedal

I yell at Ricky, "It's up here!  The package is on the porch"

... to which I hear Ricky grumbling ... all the way down by the street. Ricky, who at this point is in no mood whatsoever to deal with a charging dog yells, "HARVEY - ITS ME!"& then Harvey thinks its a game & changes his tune quick & starts wagging his butt (he has no tail) & wants to play.

Ricky & Harvey made it back up to the porch together. One looking happy, the other not so much. I'll let you decide who is who.

Ricky thought it was a package he was waiting on from Home Depot. Manly stuff.  (Insert Home Improvement Tim Allen Uh-uh-uh laugh - or howeverthat goes)... & then I told him that package came in earlier.

Oh yeah - he remembered. Guess that sleep was hanging with him after all.

So, what was the UPS guy delivering at 9pm at night that was so important?

I stood with an Old Navy package in my hand with a pair of $4.00 kids leggings in it.

That was worth all the excitement for the night, right?

Ricky just looked at me & grumbled his way back to bed telling me not to wake him up ever again if someone was knocking on the door late.

... insert more grumbling... which Harvey Dent TOTALLY took as a sign its not the time to play now.

Needless to say, the Christmas Spirit went down a few notches in our house that night.

Except I know one happy little girl whose going to be excited for some Old Navy leggings she's going to get soon.

Thank you UPS man for being so diligent.  Next time I'll leave milk & cookies for you sir.  Just dont knock on our door at 9pm at night. 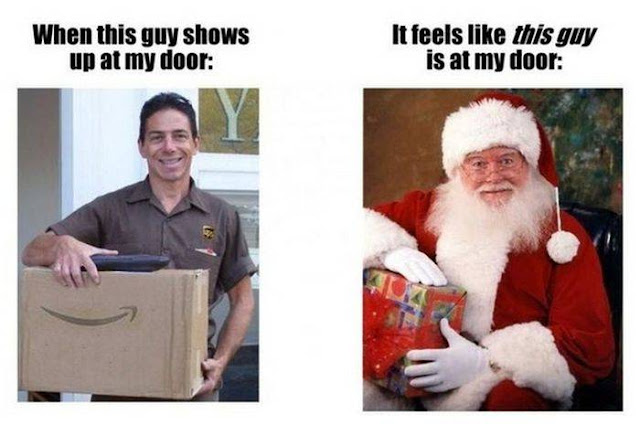