I had another late night last night...but it was all good! Ryan made it back from Colorado Tuesday night & he had called to check on Ricky & his new job. They talked for awhile & then, being nosy & talkative, wanted to talk to Ryan next. I get on the phone, & the updates of the past week happened - & then we got talking. As from previous posts, when we get to talking - it can last for HOURS! Next thing I know, I'm telling him to grab his Bible so I can show him what we talked about at Joe's Bible Study. I wanted his insight. One thing leads to another - then another - then another - & before I know it - we talked for over 2 hours going through the Bible looking at things & questioning & discussing - it was some good stuff - let me tell you! (And I have to note - I am LOVING my new Study Bible! Thanks Christy!)

But something we ended up hitting on was the talk of discipline. In our Study Group - we've ran across that idea referred to as "pruning" - but Ryan found it in scripture as another way. A direct "God telling you why" sort of scripture.

11 My son, do not despise the LORD's discipline
and do not resent his rebuke,
12 because the LORD disciplines those he loves,
as a father [a] the son he delights in

So - when I'm being disciplined - its because God loves me - not as a punishment or as an "I told you so" sort of attitude - And then with the help of my great new Bible - it led us to Hebrews where we found a WHOLE chapter dedicated to this idea.

4In your struggle against sin, you have not yet resisted to the point of shedding your blood. 5And you have forgotten that word of encouragement that addresses you as sons:
"My son, do not make light of the Lord's discipline, and do not lose heart when he rebukes you,
6because the Lord disciplines those he loves, and he punishes everyone he accepts as a son."
7Endure hardship as discipline; God is treating you as sons. For what son is not disciplined by his father? 8If you are not disciplined (and everyone undergoes discipline), then you are illegitimate children and not true sons. 9Moreover, we have all had human fathers who disciplined us and we respected them for it. How much more should we submit to the Father of our spirits and live! 10Our fathers disciplined us for a little while as they thought best; but God disciplines us for our good, that we may share in his holiness. 11No discipline seems pleasant at the time, but painful. Later on, however, it produces a harvest of righteousness and peace for those who have been trained by it.

Maybe you had to be there - but we were excited about this verse last night - maybe it was the lack of sleep (hehe!) I particularly like the way it says in vs 11 - for those who have been "Trained" by it. For those who work out & train in exercising, its not easy getting there - its tiring, makes your body tired, you have to have the DRIVE to push forward - to not quit. God is "training" us all the time with discipline - because He accepts us as His CHILD (hello - do I hear a Princess comment somewhere) - how cool is that! 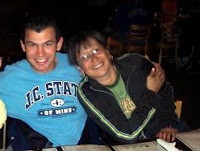 .......Ryan makes me miss my friend - but how much he is like his mom - keeping that Word of God close to the heart. I see her living on through him - and am so glad to still experience that DRIVE to always learn more. It pushes me as well - the Love of the Lord is so contagious!