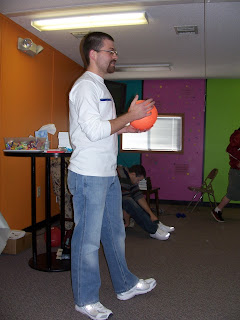 I have to say, Joe & Ryan did one of the best lessons in our Jr. High group that has ever been given - & I'm just not saying that - I heard with own ears some kids say so!
Joe came prepared with donuts. The kids were instantly intrigued what they had to do to enjoy! First he started off with the verse everyone seems to know - even people at every sporting event - John 3:16 - how God loved us so much he sent his son so we may have ever lasting life. A verse probably all the kids had heard before - but never SEEN in this way.
Joe went to the first kid & asked if he wanted a donut - Of course he wanted a donut! Before they could eat the donut though - Ryan had to do 15 push ups. At first, giggles & laughter about the event was going around the room. Next person - sure, they want a donut too - another 15 push ups from Ryan before it was to be eaten. Then it came to a person who didn't want a donut - OK - they didn't take it, but wait, Ryan still had to do the 15 push ups. A lot of curious glances when that happened. The laughter was dimming & everyone was watching.
At one point, one of the kids even said "Can some of us leave so he doesn't have to do 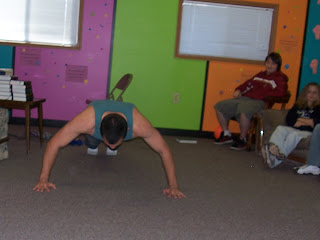 the push ups for us?" - they were slowly getting the message. After 9 kids (135 push ups) Ryan was slowing down. Sweat was coming up on his back - his arms were starting to show some veins popping out. It kept going.
In the end, there was 18 people in the room - Ryan had to do 270 push ups! Towards the end - it became painful to watch. Ryan would have to take breaks in the middle of the 15 push ups before the person could enjoy their "gift" of a donut. It was even brought up - "Can I do the push ups for my own donut?" - the answer given, "No, Joe & Ryan had an agreement beforehand". When those last few people getting their donuts & all of us watching Ryan, it was dead silent in the room - no more giggling at all!
The message was learned. Whether you took the gift that was given or not, it was paid for anyways. And it made it even harder on the ones who didn't take the donut when they realized that the struggle & pain was there anyways - & others got to enjoy their fresh donut, while the ones who turned it down got nothing.
It was a wonderful lesson!!!! Thinking of what Jesus went through for us - & how people just shun it away like it was nothing. I just pray that the kids remember this always - which I feel like they will - & always hold it close in their heart. Good job Ryan & Joe - it was truly a blessing!