The weekend I was found out I had a protege....

It is really Christmas?

It doesnt feel like it to me... we're just so involved with puppy fever & I've wrapped no presents & we havent even gone shopping... so yeah, I'm not sure it's Christmas at all.  Except we did go to a Christmas party so that did give a little dose of reality... & there was snow this weekend which really did add to the Christmas feel... so I guess I'll get there.

Friday started off with my usual grocery store trip.

I went with a list... from Ricky.... can you believe that?  He actually wanted ingredients to try & make some no-bake oatmeal cookies... which I dont understand, because it still involves a pot & heat & a spoon  & stiring & wax paper... all of that sounds like baking to me. Hmmm...

Anyways, Ricky gave me the list of things he needs... & I walked down the aisle & sent him this picture because everyone & their momma must have had no-bake cookies on their weekend agenda. Geez. 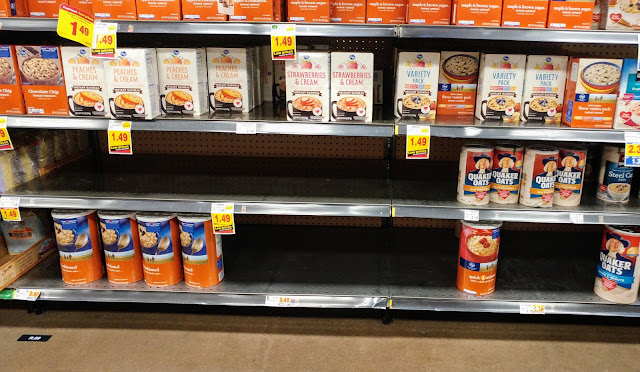 Saturday, I was excited to sleep in... except with a puppy, there's not going to be sleeping in for awhile.

I was actually glad to be up because it was so beautiful watching the sun rise - even when it was just for a second, because snow clouds came our way. 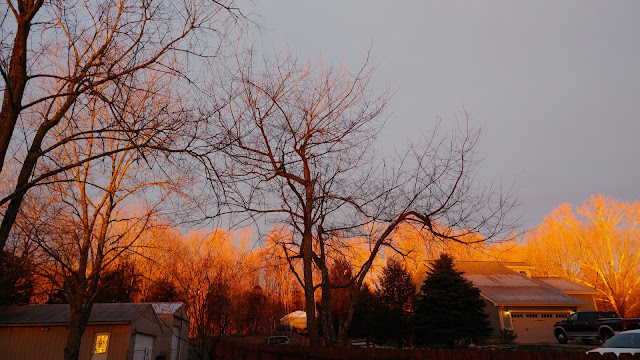 I had a few errands to run with my Etsy store & had some things I need to do around the house...

& of course, had to get in a new weekend picture of our boy. 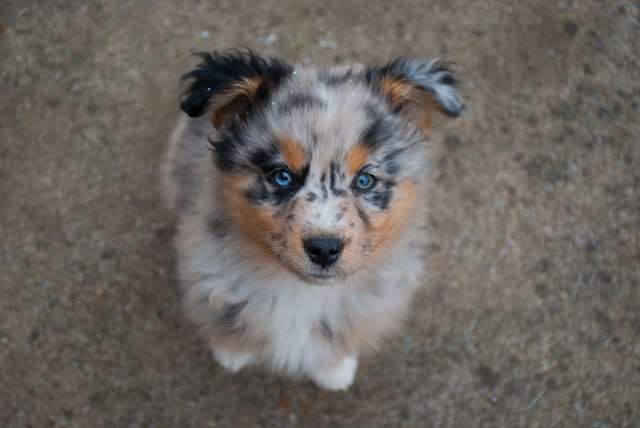 I'm going to try & document every weekend so we can watch him grow.
Which is is doing WAY TOO FAST.

I can already see a change in his legs... they're getting longer. NOOO... I need him to be a puppy at least for a little bit.

& dont think I didnt document my other big baby.... 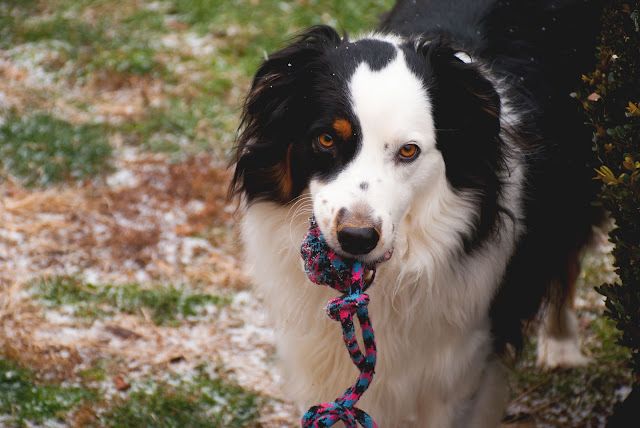 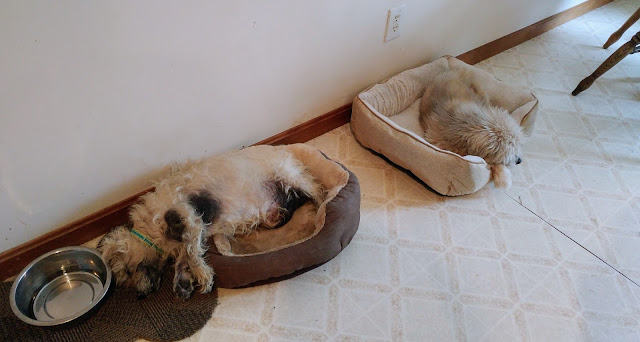 It's funny because Bruno has all of a sudden taken over Zoe's bed - so we pulled out another one we got on Black Friday & put it next to it & they have been side by side all weekend long. Its like old room mates.  I've totally got a whole story line in my head of these two & their nursing home days together.

I did a few other things around the house like laundry & bills - fun stuff...

while the dogs got to enjoy the outside & freedom 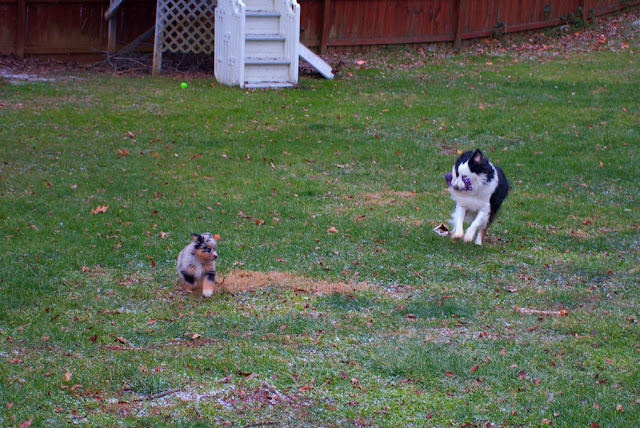 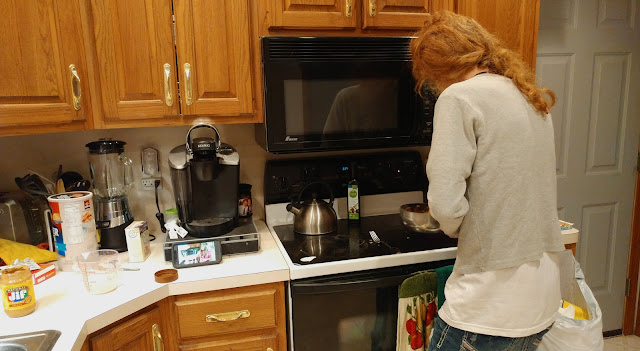 Call me impressed.  For someone who doesnt even like to warm up soup, he did pretty good!

Then it was time to get ready to head to Ricky's cousin that was having a family get together.

How nice of her to open her home to everyone....

& I loved it because it gave me an excuse to get a Christmas sweater - they were having a contest.  I loved it because her son was judging the ugly sweater contest & when I lost, I said, HEY, ITS JESUS & he said, "THATS WHY ITS NOT UGLY" ... I gave him a high five on that. 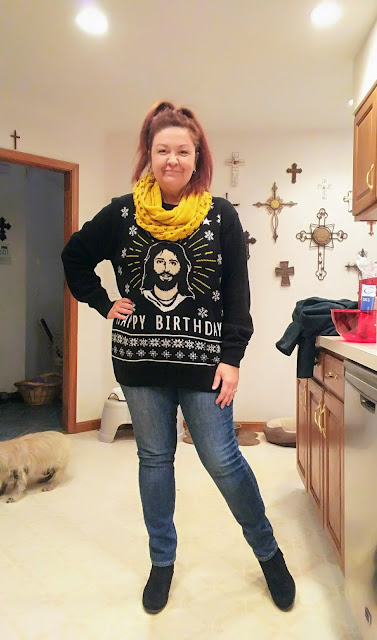 It was so nice to see everyone. I just love these people.  This is Ricky's dad's brother... so our Uncle.  I just think he & his wife are the best people. So loving & kind.... 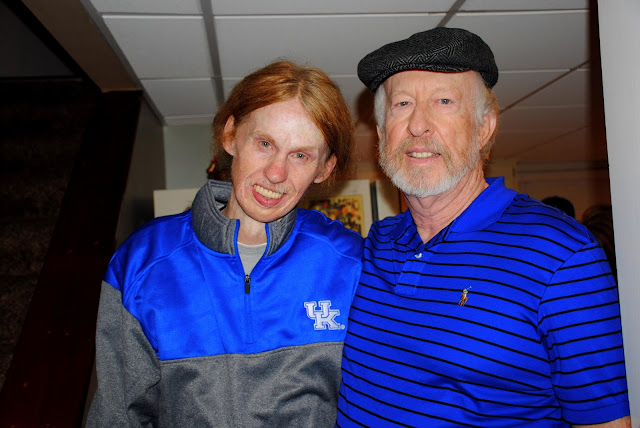 & their kiddos are exactly the same.  I know they aren't "technically' my family by blood - but I totally take them as my own.

One of the best part of the nights for me was seeing Paula's daughter (That's Paula above).... I have watched her growing up since I've been so blessed to do so many of their family pictures through the years.

Their middle daughter, every time, has always been so intrigued with the process of photography & has always been SO HELPFUL to me. Helping carry thing, equipment, blanket - whatever we were using. She just had a knack for wanting to know how it all worked....

so when she told me she asked Santa for a DSLR camera for Christmas, I just gleamed.  She said, "I want to be a photographer like you"... OK... I beamed EVEN MORE...

So I had brought my camera to the party & wanted to try & take some pictures, but I ended up handing it over to her & let her have fun with it.


Now - be warned - I dont hand my camera over to just anyone. I'm really protective over my stuff... & she is only in 5th grade - but I promise you, I trust this girl THAT much.  She really has that most potential that I already see.

& it was great - she got the best pictures of everyone at the party... I know everyone there is so thrilled she went around & snapped away.

Sunday, I was so excited to see my MSM girls - its only 1 more Sunday till we're off for 2 weeks & then start the final year of our 8th grade adventure. I cant believe we'll be in HSM next year (High School Ministry)... such good times ahead.


I left from church & headed to see my Joysters on our final meet up for the year as well. 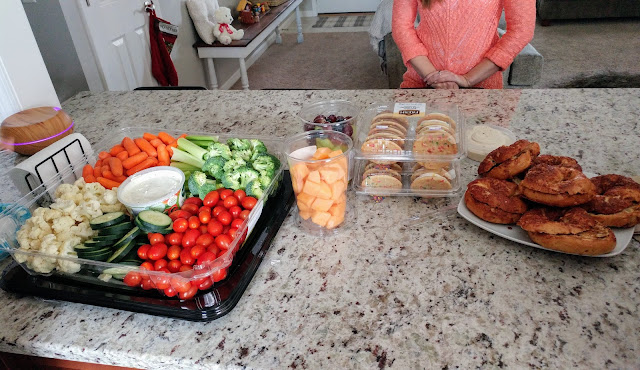 Crazy that it's near the end of the year - I really can't believe it.

I picked up some dinner for our puppy master.... or my husband ... he goes by both titles right now.

& then it was time to give my old man his every other day allergy bath.
I still am so thankful his skin is doing SOOO well.  He is going through a stage where he throws up water... but he did that last time he got his antibiotic shot.. & he had just stopped... when it was time to get his shot again... mercy. So yeah, we are constantly on a watch for puppy pee (which, knock on wood, he's doing pretty well at potty training) & old man water hacking.  Fun times up in the Vincent house.  Fun times.

& still, none of it feels like its December. haha

So bear with me as I'm still trying to figure out my blogging with my new job.  It's been tough. I can only really blog at night now & I REALLLLLLLY gotta start getting my workouts back in ... & my knitting is suffering.... because old dogs & new puppies need attention right now.  I know I'm going to blog on Monday... & I'm totally going to keep Thankful Thursday up.... & I'm trying to keep Friday Favorites going as well... but that can be iffy... & Tuesday & Wednesday?  Well... like I said, we're just going to try & get some routine or plan down.  Life has been a changin' in every way possible....

Did you start Christmas parties?