The weekend that we cut the cord....


This was a big weekend for us.... the weekend we cut the cord.

Yep - finally made the jump from cable.

It's just ridiculous the price increase every month they were giving us.... so we have loaded up the TV with all the things they need (Roku sticks, Amazon Fire Sticks & Google Chrome). & yes, we literally have all of those on different TV's.

We've decided to go with Direct TV Now... at least trying it out... & so far, I'm really happy with it.  It's just going to take some adjustment to get used to not watching some shows LIVE since we dont get NBC or CW... & the down side, Direct TV Now doesnt have a DVR - so I am at the mercy of when they bring out shows like This is Us or Riverdale onto their programming. Though I do think they are faster at loading it up than Hulu that is a week & a day later (Am I right on that Hulu people?)

Anyways - we'll see how it goes without cable. 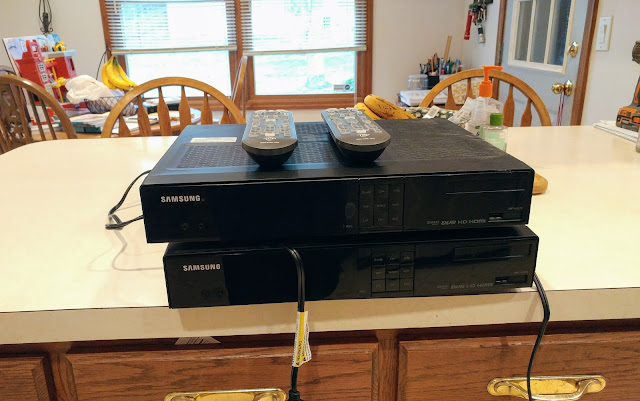 It's funny because we were talking about how the younger generation, this is just the way they've watched TV - streaming is just ordinary to them.  Where we have had cable TV since the 80's so it feels so funny to be without - or learning how to maneuver around on all the streaming services to find what you need.  In other words, we're old.

Anyways - Saturday, I started out my morning with some coffee & my library books on knitting to look through some patterns.  So far, I'm not finding a whole lot that I'm in need to make.  That's disappointing - I was hoping to have an overload of things to make. 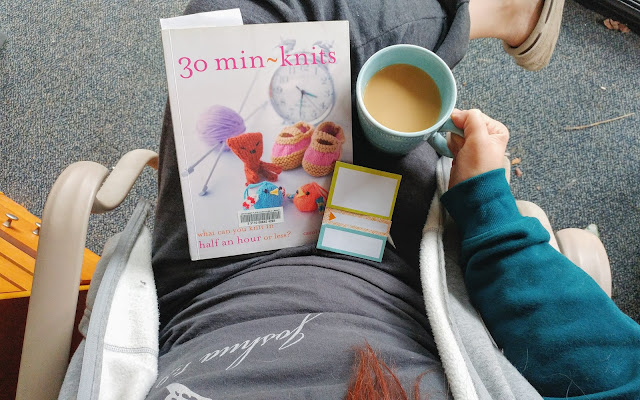 I cleaned the house for a bit ... with my aussie boys close by as always - & then we headed to Target to pick up some things we needed for the house. 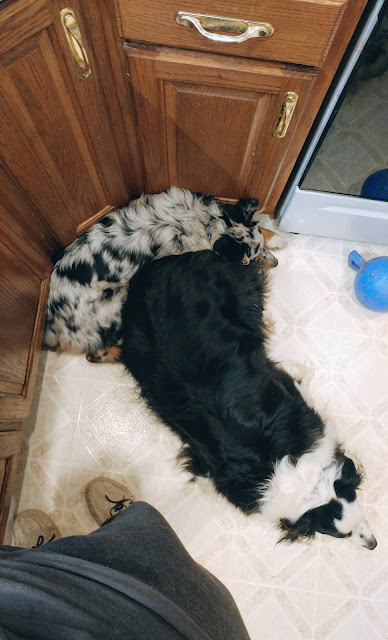 & then it was off to celebrate our grandbuddies' 2nd birthday.  It feels like it was just yesterday I got to stand in the room & hear them say "It's a boy" ... but 2 years it is... 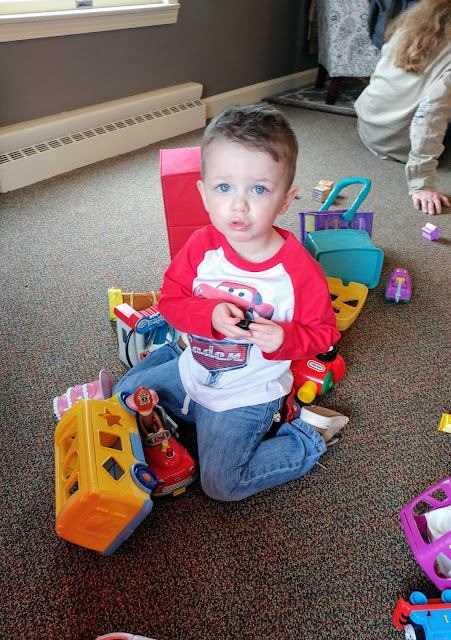 Then we had to get home because hello - UK playing in the NCAA Tournament.  So that means I have to stay away from all things baskeball or even stay away from Ricky. & I have to be the protector of the dogs. They hear Ricky screaming in the locked room at the TV & they are terrified they're in trouble. So while Ricky is watching basketball, there's a lot of me looking at dogs & petting them  &saying "Its OK"..."You're not in trouble"... "you're a good boy"... basketball season in our house is a real struggle.

I spent the rest of my Saturday knitting & learning what TV is like without cable & I ended up binging & watching the season of A Good Place. I'm all caught up now ... & loving it.  What night does that even come on?.... & then started into Season 2 of Skin Wars. I'm so obsessed with that show.

Sunday, I got up early & was pumped.  I had the opportunity to teach about Bible Journaling. It was cool  because they had a really neat opportunity this week (& next) since its Spring Break around here & there's a lot of people traveling & out. They had 3 break out classes for kids to go to - one of How to Pray, one of How to Love Others - that was teaching about Love Languages - & then mine, How to Creatively Study the Bible 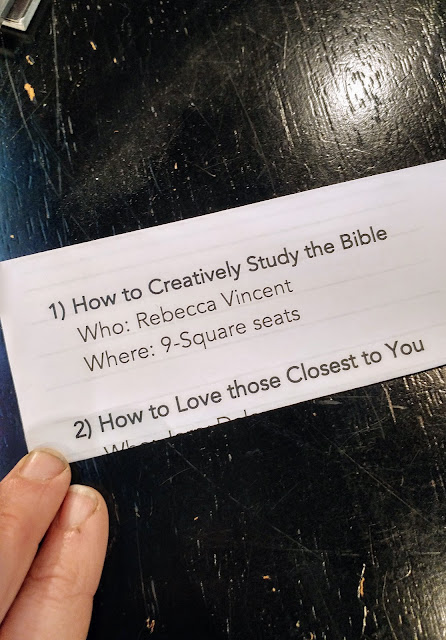 It was super fun to watch the kids do their own thing when they read a scripture & to see what they got out of it. 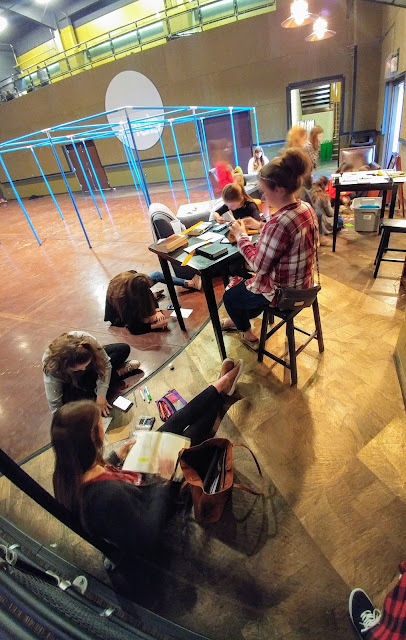 One thing I learned though - I had heard that they dont teach cursive writing, but I've not really thought how that works... but I was showing them some things I had made & they couldn't read some of the things I had written - in cursive. WHAT???? & they totally couldn't write it. One of the kids said they knew how to write their name but that was it... maybe a "the" or an "is" - but no more words. That is just so sad to me. How are they not teaching cursive writing, things our old American documents are written in - but they are coming up with ridiculous ways to teach math now?  WHAT IS HAPPENING??!?!?!?.

But it was still fun to see their creative juices flowing...

After church, I ran to Sam's Club to load up on some essentials - like paper towel & coffee (YES)

& then got home to enjoy the beautiful spring like day.  I sat outside in the sun & soaked up it & pulled out some of my paints & was inspired from the morning & got to play with some canvases. 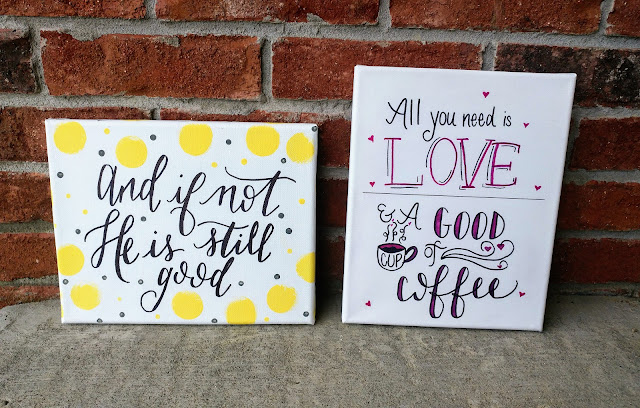 ... & of course, a weekend isn't a weekend without reading with my dogs laying near me. 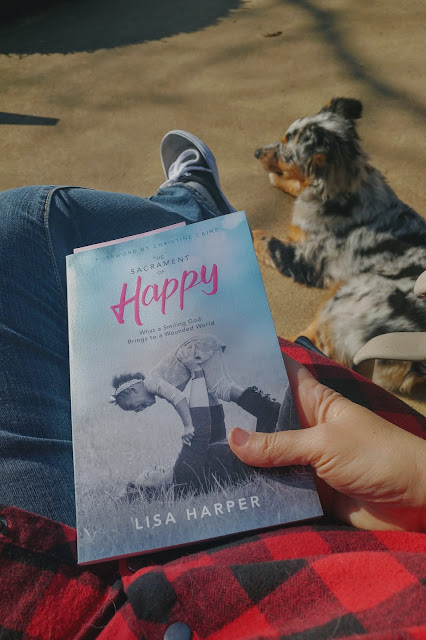 The day was getting away from us with writing out bills & trimming up Zoe & her crazy winter hair...

& then its time to think of the week ahead... once again.

Did you finally get a taste of spring?

Does it bother you about cursive writing?