Its Friday... Thank GOD!  It has been a LONG week with this time change I'm dealing with.  And we were told yesterday that it could take up to 4 months if they can repair the bridge & up to 4 YEARS if they have to replace it.  By the time 4 years passes, I think I'll age 28 years... its like dog year calculations getting up at 4:30 am & what it does to a body.  To get my mind off this nightmare, I'm just going to frag.


******
To try & find the positive in life, going into work early also means I get off work early - so I get off at 3 & its taking me 45 minutes to get home so that's nice to be home before 4.  Its going to better because the time change for the Fall is nearing & that means it gets dark by 6.... I can now get my running in before it gets dark!  Look at me finding a silver lining!!!!!!


******
Yes - I know my blog is messed up again ... sigh... the designer had accidentally deleted my file from Photobucket so it has to be redone.  But she lives in a time zone that is like 8 hours ahead of me so we're having a hard time with her getting access to my blog to make the changes.  ... again, sigh....


*****
Yesterday was GORGEOUS around her.  A real fall day!  Temps in the 60's - blue skies - cool breezes!  So I take my dogs out in the back yard & play with them.  I ended up going to get my camera to take some pictures of my babies, when I was walking & not looking what I was doing.  BAM!  I kicked my bare toe in the corner of a concrete block.  It looked like someone chopped my toe off!  Blood EVERYWHERE!  I actually ripped my toenail off.  It was just hanging by one little piece.  I had no idea a toe could produce so much blood!  And my dogs are so nervous when they know something is wrong with me or Ricky so they were running around me trying to lick my toe.  It was quite a sight me jumping around screaming, trying to keep my foot high where dogs couldnt lick it, blood dripping on their heads & me trying not to drop my camera in the midst of it all.... ahh, the moments of life....


******
I'm totally in LOVE with this idea that I found on Pinterest... you take a picture on your anniversary & then hold the picture for the next year's anniversary, then the next year - so on.  Can you imagine how cool it would be on like your 10th anniversary - 20th?  50th?!?!?!?!  Pass this idea on to every newlywed to start immediately!


Source: None via Rebecca on Pinterest
*****
I took my first spinning class last night... (with my bleeding, toenail-less pinky toe)... it was pretty cool!  Except for my "seat area"!  OH MY GOSH!  How do you train THAT area?  My post on DailyMile was, someline like, "the pain in my lady parts was too distracting from the other pain." ... if you've ever taken a class, you'll underestand that comment fully!!!!  I had jokingly told someone I was going to put kitchen towels in my pants, around my butt... now, it doesnt seem so funny & sounds like a brillant idea!

*****
Can you tell I like pinterest?  You can embed the pictures so it doesnt take up room in my space saving picture area... SCORE 1 for me!


*****
SPAT OF THE WEEK:  Painful Revenge!!! .... So Ricky is constantly on me at home about my tendonitis!  "Dont get on the computer" - "Dont knit" - "Dont do that workout"... it gets on my nerves.  So what happens to Ricky this week?  He had heel spurs & they are flared up.  He can barely walk & when he does, its like on his tippy toes (he's a pretty ballerina) to get the weight off his heels.  So I've been yelling at him everytime he's on his feet now... ahh - sweet revenge.  But the weekend is coming & we were glad for Ricky to get off his feet & let the heels relax some... & then, what does he do?  Someone at his work asked if he would trade with him to work this weekend... Ricky said OK!  Really?  He can barely stand as is & now he's going to only have one day off his feet.  I told him not to ever say anything to me again when I do something to aggravate my arm.  ... (really, that's why I love Ricky - he changed days with this guy to help him out... thats my generous man I love... but dont tell him I said that)


******
And wanted to show you that we dont spat all the time - we can actually look happy :) ... I just have to post this mainly because I've been with Ricky for 19 years & I think we have 3 pictures together.  And 1 of those is our wedding picture!  He just refuses to take pictures... so for him to actually take a picture - & one he APPROVES of?  The world must be coming near an end....


(This picture is worth taking up space on my file) 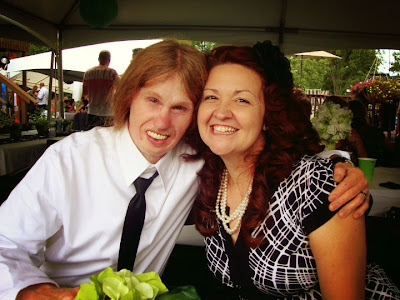 Hope you all have a FABULOUS FRIDAY!!!!