I never got to post anything from last weekend - when I went down to witness these amazing athletes that we call IRONMAN ... or IronWOMEN!


You wouldnt think that just standing on the side of a road with thousands of people running would do much for you... but I left so inspired & in awe.

After all, when they got to me, they had already swam a good hour & biked over 100 miles - which took most of them around 5-6 hours (a good average)... then they were into a 26.2 mile run.  They had started their day early at 7 am & I got there at 3 pm & these people were still trucking along.  My place on the road was around mile 6, but then they had to go up the road & circle around - so they passed me again, making it mile 10... & then they had to do it all over again!!!! So they passed me 4 times in all on their run.

I joined a team called "TEAM GREG" ... this family was the sweetest family, cheering on their daddy, a husband, a brother, a uncle.  Greg was all of these things to these people who had been following him all day long.  When they saw Greg coming in, I told them, I'm an official member of the team & they welcomed me with open arms.  After all, I have a great big loud screaming voice & Greg appreciated that.
﻿
I also saw people injured & sick... I saw a woman who got the EMS to look at her leg that was BRIGHT RED - like the circulation was odd with it.  They advised her to stop... she didnt ... she kept on.  And yes, I did see her four times... (if they passed me that 4th time, they only had 6 more miles to the finish!!!)

I also saw the ambulance have to take someone out because something was wrong with their heart.  Someone had died earlier in the race during the swim with a heart attack so I'm sure the EMS were very aware of everyone on the route.  I will say, they were right on it from where I was standing & I heard many other stories that they were on the ball getting people help when they needed it.


I witnessed a man throwing up his guts... not once, not twice, not three times, but four good HURLS... I had to turn away but was close enough to where the sound of it was enough to make me stand next to him & hurl too.  The EMS was near by & asked if he needed assistance.  He said "I feel like something didnt agree with me" (you think?) & he headed out again.  I saw him on his 2nd lap pass me - I asked if he was feeling OK then & he said that throwing up was the best thing he did & he felt fantastic.  Well, there you go.  I also saw him looking great when he passed me the 4th & final time.

I was most excited about seeing a young man from my church, who was 19 years old competing.  I wasnt sure I'd see him - but there he was on his first lap around.  I said, "you're almost there" & he looked at me & said, "No, I'm not"... uh-oh... I know that kind of attitude -you're struggling.

He did FANTASTIC through the swim - did awesome in the biking - & started out probably too fast in the run - so when he got to me the first time, he had hit his wall - & still had a long way to go.

I saw his fiance & his sister a little later & we were waiting for his 2nd loop...  people we had seen before him had come & gone & still, we hadnt seen this young man.  People that were AFTER him then passed us & we started to get worried.  The good thing about my having my camera, I had my long lens & kept an eye out for that gold shirt.  I saw it & off his fiance went to see if he was OK... (see her running on the side in the green shirt?) 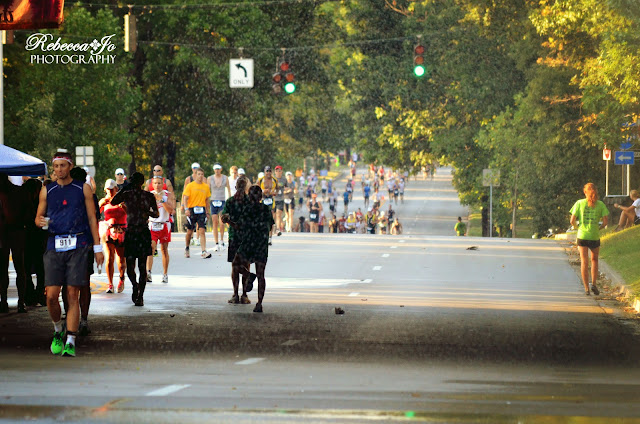 They saw each other & ran to one another (cue the tears)... but gotta stay strong for him! 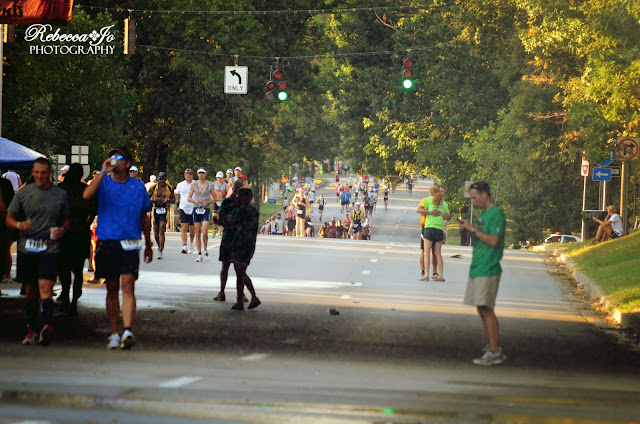 He came through the water station & got one more hug before he headed off again.

When he came through the final time, he looked at me & said "I've never been in so much pain in my life"... my heart broke for him. I just kept trying to scream encouraging things to him to get him through!  He was sooooo close!!!!!  But he ended up picking up the pace & finished in just over 13 hours!  He is TRULY an Ironman!!!!

After he went through, I felt bad & couldnt make myself leave.  Afterall, I had been out here with these runners for most of the day.  They even remembered me on their loops because one young lady even said, "You get the award for the best cheerleader" - I took that title proudly!

Another runner said to me, "you have had a long day out here" - really?  Me?  I laughed & said, "Dude, I think yours may seem a little longer" - he just laughed.

That's the thing - I know I appreciate people cheering me on - even strangers - & so many people thanked me cheering them on.  I even tried to cheer for EVERY PERSON... "Hey Mr. Orange Shoes" - "Hey Mr. Straw Hat Man" - I would name everyone - or point right to them & say "You're gonna make it" - "You are STRONG" - "I am so proud of you" ... & the smiles would come every time. 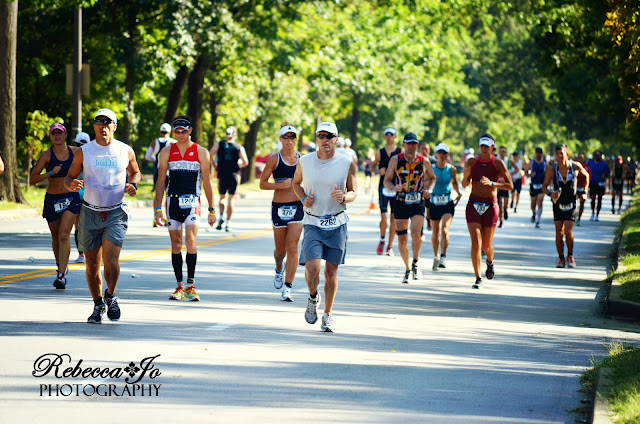 I was pretty good at recognizing these faces so when they passed me the 4th time, I told them, "You're finishing!" ... but when it was 8:30 & I saw people passing me for the FIRST time - my heart broke for them.  You had to finish by midnight or you were disqualified!  Can you imagine going all day long & your time not counting?  So I stayed as long as I could letting them know that it doesnt matter about time - it was a pride thing - it was a personal thing... & if anything, they touched ME.  I wish I had a medal to hand them myself.  By this point, most of the people on the side of the road had gone to the finish line to cheer in their family or friend... so I was the lone "cheerleader" on the road, so I had to jump up the screams... every person there deserved to be cheered on - no matter how late it was!!!

I tell you what - I was emotionally invested with these people when I left that evening.  I will never see them again - they will never know who I am... but they inspired me... more then they could ever know.

I honestly think that it was such a sign of when you run into some hard things & you dont think you can make it - you find that strength somewhere inside to keep pushing on... & it may not be a pretty finish - you may be hurting, it may be misery... you may even have to be taken out because of injury - but as long as you keep fighting & give all you can give, then that's all that matters....

But believe me - I'm still sane - you wont be seeing me signing up for an Ironman... a triathalon MAYBE... but never an Ironman... I'll just continue to hold my title as the best cheerleader!