(I used this example in our middle school lesson for Sunday)

Its no secret that I'm a dog lover.  If it were up to me, my whole backyard & house would be full of dogs that needed a home.  But its not up to me.  Ricky put the reign at 4 dogs - which I cant complain.  My house is always full of a wet nose to rub up against you, or a furry back to lay on or rub whenever you want.

When we got a phone call asking us if we could take in Bruno, Ricky was a bit hesitant.  But I begged him - afterall, this poor little dog needed a home & I gave my best impression of puppy dog eyes.  Ricky gave in & said we would give it a try.

We were told this was a Carine Terrier - something we didnt even know what kind of breed that was.  The wonders of "Google" soon told us that it was the same kind of dog that Toto was in The Wizard of Oz.  Who doesnt love Toto?

Ricky went & got Bruno & I sat on the front porch with the other dogs waiting anxiously for our new family addition.  But when I saw Ricky's face in the car coming up the drive, I though, Uh-Oh - something's wrong.  He got out of the car with Bruno on a leash... um.. no, he didnt look like Toto.  More like a chubby Toto that got stick in a powdered donut factory? 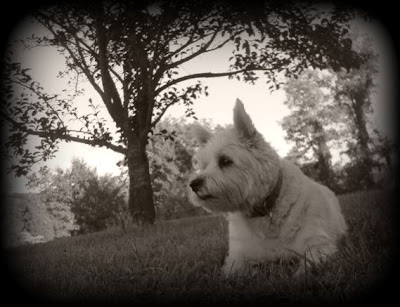 He was nervous & probably not used to other dogs - so when our dogs went to greet him, it wasnt a pleasant hello.  Bruno was snippy & growled & lunged at our babies.  Not a good start at all.

Ricky was immediately saying, "We're not keepig him"... but I kept begging him to give it some time.

Over the next few weeks, I gave Bruno the attention... it worked out well because our other dogs think Ricky hung the moon - or at least is the creator of the wonders of treats & dog food - so they were sticking with their master.  Me & Bruno - we became great buddies.

I could never sit down without him being in my lap - I learned he had to cuddle with me everynight - I learned that he would follow you everywhere just to be near you - there always had to be some part of him that touched you... I found that he is the sweetest dog.

Ricky soon noticed this from a distance... & before I know it, Ricky would sit down next to me & try to lure Bruno off my lap to come to his... he'd give Bruno treats so he'd follow Ricky now instead of me...

Ricky wanted to share in this relationship that Bruno & I had...

There's a quote that says, "Sometimes you have to watch someone love something before you can love it"

What a perfect example of how the world watches people that are Christ followers... & what a difference it can make in their lives.  Afterall, if someone sees your relationship with God & they witness the things that He is doing in your life, it may draw them closer to Him... they may want to experience the same relationship themselves.

People can be leery & not sure of this "God thing"... but if they see first hand the way God works in a life - especially someone they KNOW - what an amazing witness.

So share all that God does for you... let others know the things He does for you daily... the way He blesses you.... it may make all the difference in the world for someone.... someone may just want that same kind of relationship in their own life.