Friday...& its cold... & its supposed to snow today.  I guess its winter & even though we've been used to 50 degrees most of the days, we're due some actual winter weather.

(Which just reminded myself that I need to go home & cover my tulips... I'm a sucker for trying to make sure my flower survive!!!)

While I sit & worry about all the Spring flowers, lets frag...

Are you watching "New Girl"?  Oh my goodness... its probably one of the funniest new shows out there... Zooey Deschanel is adorable... & the guys are hilarious!

Its still not "Modern Family" funny to me, but its close.

Its been "College Week" on Jeopardy... the only time I'll watch the show because it makes me feel smart.  And the only time that the show has categories like "Current Movie" or "Pop Culture" ...

This dry air with the heat running in all the buildings is killing my nose... I'm averaging at least one nose bleed a day.
(Maybe snorting sanitizer isnt that smart?)

My dad sent me this picture of him in this stroller... isnt it the cutest? 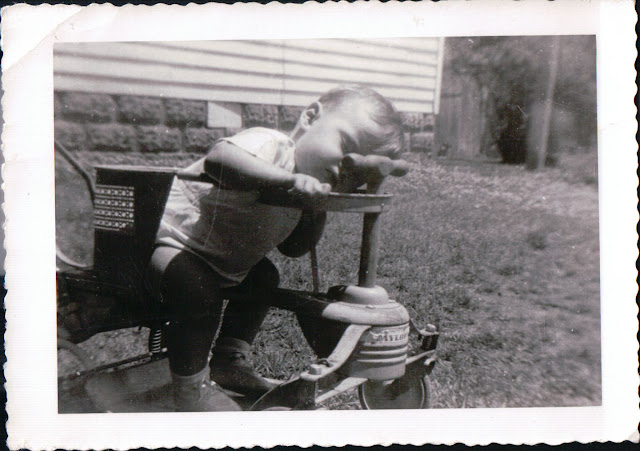 But he saw on some antique road show thing that a similar stroller sold for around $1,500 ... see?  All those Hoarders out there?  They may be onto something.

There will be no SPAT OF THE WEEK this week... in honor of my husband who ALMOST DIED yesterday!!!  No joke!  He stopped at the gas station for his daily root beer & candy bar.  He got a Twix & he said he was driving home & took a bite.  Well it got stuck in his throat.... like REALLY stuck.  He couldnt breath.  He said he started to panic so bad because he was starting to black out.  So he ended up stopping the car - IN THE MIDDLE OF THE HIGHWAY - & got out & started RUNNING up & down the road trying to get someone to help.

He said he saw the place where I get my hair done.  The owner is from our church & 9 out of 10 times, the place is full of people from our church - so Ricky said he started to run that direction... but he started passing out... he fell to the ground, & when he did, it must have moved the candy bar & he said he could breath.

Is your heart beating as fast as mine?  I was stunned when he told me the story... I think he was more stunned then anything.

The thought of the whole story trumps any spats of the week... for sure... but as long as he chews well through next week, we'll return.  Probably a spat on chewing itself.

*****
Are these the most AMAZING socks EVER?????  They even knitted them around actual heels...

My question... how short of a skirt do you have to wear with these?
& how thin do the top of your thighs have to be to pull these off?