Weekend Roundup:  What I did, what I thought, how my weekend went...

* I had an Iced Chai Tea for the first time on Friday... I went to meet a client to deliver a photo order & had to wait.  I am happy to sit anywhere with my Kindle so I got a drink.  Never had a Chai Tea before so thought I'd give it a go. OH.MY.WORD.... I was in heaven.  They asked if I wanted whipped cream - I said no.  I think if I had added that onto it, it could have possibly been the best drink I've ever had.

* I bought Coconut Oil ... my friend Erica keeps talking about everything you can do with it.  After seeing it on Dr Oz for a recipe to make a healthy muffin in a mug for breakfast in under a minute, I had to get some.....I'll let you know how the muffin turns out.

* THE BRIDGE OPENS!!!!!!!!!.... People, I'm telling you - it has been a nightmare around here for the past 6 months with our bridge closed.  Its added 20 minutes on a one way trip just to work - has made my fuel cost for the week increase - has taken a toll on my brakes sitting in traffic for hours ... its just been miserable.  But the nightmare is OVER.  They said the bridge should be open in March, but it opened early.  When they came on the news & said it would open on Friday, I literally got teary eyed.  Whew... I cant believe we survived.  I was thinking it was going to be the Promise Land & I wasnt sure I was ever going to see it.

* Ricky worked on Saturday - which used to mean I would sleep in peacefully without his racket going on.  But no - he's worse then a kid - turning on every light as he's getting ready & making an even LOUDER racket.  So I'm up earlier then normal on Saturday... oh well - gave me time to make a nice big breakfast.

* Whitney Houston's funeral... my goodness... I can't believe how amazing that was.  I started watching it & knew I had to get my run in before it got too late so I DVR'ed it... I was gone for over an hour & it was STILL going on... all I can say?  I want to find a black Baptist church... those people know how to WORRRRSSHHHIPPP!!!!!

Other thoughts of the funeral?
~ Tyler Perry?  A-maz-ing... is he a pastor?  Because if not, he needs to be.
~ TK Jakes.... his 5 minute message was probably the best sermon I have heard on love & Jesus in a LONG time.
~ Why did Jessee Jackson look so bored during the whole time... while the other pastors were standing, praising, worshiping...
~ I love Bebe & Cece Winans... need to find my cassette that I have of them :)
~ Loved that their brother was the pastor giving the final message... he was incredible
~ I had to laugh at the white lady with the big afro hair that was eyeing Alicia Keys down while she was performing... she distracted me the whole time.
~ A friend of mine told me that at their church (that is similar) that they have a nurse that is there to pass out orange juice for the diabetics & if anyone passes out or any other emergencies... I thought she was kidding & then saw the nurse walking around giving assistance there.
~ I think Piers Morgan excited reaction for the gospel music, the messages & the love of this church was so inspiring.. made me excited to think the world was also getting excited - seeing a good side of Christianity!
~ Kevin Costner went on too long & talked WAY too much about himself
~ I cant look at Dionne Warwick now & not think about how nasty she was on "Celebrity Apprentice"
~ When they raised the casket at the end, with "I Will Always Love you" playing & Cissy walking behind?  I totally cried...

* Ricky got me this for Valentine's Day... I have been on a chocolate fix all weekend!!! ... Isnt this the cutest way to get candy? 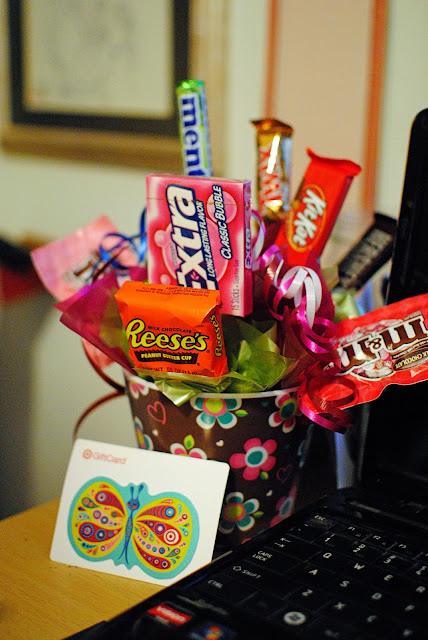 (He got me this balloon too for V-Day... it plays 'You're the one that I want" from Grease when you touch it.... he knows my Broadway loving heart) 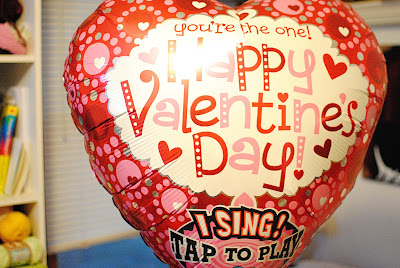 * And speaking of chocolate fix?  My dad brought me over a Hershey Pie from my amazing parents... I mentioned one on my blog the other day & lo & behold - I now had one.  Notice that I said "HAD" ... I gobbled that baby down.  (Its a frozen dessert if you're wondering what that is... I call it "Chocolate Heaven on a plate") 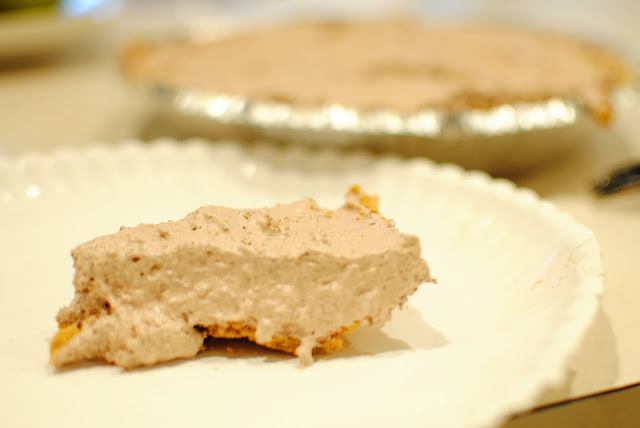 * I lead the message for the Junior High kids on Sunday... my friends & fellow leaders told me that they thought it was the best message I've ever given... that made me proud.  Keep an eye out - I'll be sharing parts of that lesson this week.

And to make your Monday... some GOSPEL!!!  Honoring a friendship too... (& you have to watch or fast forward to the end just to see Ellen who was hosting the Grammy's)