*****
Its Friday the 13th...
I dont normally care or give it a second thought....
But this morning, I pull into McDonalds for breakfast at 5:50 am
(My kitchen is EM-PTY... I was desperate)
No one is there at 5:50 am - right?
So then, why did they JACK UP my order so badly?
I asked for a Egg McMuffin with NO CANADIAN BACON & an unsweet tea.
My egg mcmuffin had a slap of SAUSAGE on it (...gag...)
& my tea was SWEET...
Might as well put a straw in a container of syrup.
I couldnt even drink it
You mess with my food?
Gotta be Friday the 13th curse...


I just want to know his secret on keeping his hair this straight....
humidity in the area is killer & my hair looks like a finger went in a light bulb as soon as I step outside...
I'll root for the local guy
... until he does something stupid...

Speaking of which
...does anyone watch ... or even care about...
The Glass House?
What night does that even come on???
Those poor people inside have no idea that no one cares - do they?

Steven Tyler is not coming back to American Idol?
BOOOO!!!!!!!
I dont care if Jennifer Lopez is or not...

*****
Its my turn to teach in Youth Ministry this weekend
... when its my turn, if someone sees me driving, please know that I'm not insane

I'll practice my lesson everytime I'm driving
so it looks like I'm totally having this crazy deep talk
... with myself...

*****
Look at our Bruno...
We had taken his "Piggy" away from him because its falling apart
but I said the word PIGGY & he was freaking out, running everywhere looking for it
... so we gave it back to him...
He cleans its head & sucks on the top like a pacifier
He did that to this poor animal's beak ....until it came off
... I still need to sew up the torn places...(see the torn spot on the butt?)
This thing has GOTTA be full of germs

*****
Found some new apps yesterday for my phone
One - from a friend - who told me of a cool editing tool... Aviary
Its nice - like that it cleans up skin & brightens teeth
You can also download free stickers for pictures with it

..I also found a Gas App that shows the price of gas all around so you get the lowest price... its called Gas Buddy

... & a Notepad app (Color Note) where you can jot down shopping lists, to do things & whatever you want to mark down... I'm all about notes

Any other good apps out there I need to know about?
Send 'em my way

Funny of the day
..& with our house being grocery-inept, I can totally use this line

Spat of the week:  Down Comforter

We have a stand up revolving fan by the bed...
(not one of those round ones, but one of those long ones that stand 4 ft tall - like a building)
Well, its on the side that Ricky sleeps on
& he's also got an air vent on that side of the bed - so he's getting good air flow

His body blocks the fan from getting me
& the air vent on my side?
Sydney lays right OVER TOP of it
... she's no fool..
but she sure makes me hot since it cuts off all air from coming out

So Ricky has this HUGE down comforter he uses at night
Now, this is the blanket that I swear by when its winter because it holds the heat in so well
... when its 5 degrees outside...
So I'm constantly kicking it over on his side & its like a
MOUNTAIN O'BLANKET
on top of him

... even Bruno cant lay down with this massive blue heap around Ricky...
but Ricky loves it & needs it to sleep with

its like totally opposite of every idea of "hogging the blankets"

(haha... found this comic while looking up "hogging the blankets"...
our life kinda is like that) 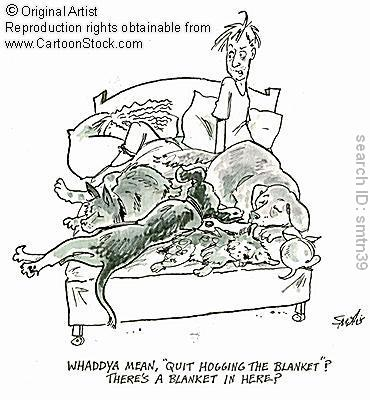 Hope you all have a Fantastic Friday!!!!