Well, that title doesnt sound like a good start to a Thankful Thursday, does it?

But I'm going to use todays post to do an update on what's the latest in my ever going "body falling apart" saga.  & we're going to find the blessings in it... hence, finding gratitude in it all.

So, you've probably seen me mention in my posts a lot about my arm pain lately & you've surely seen if you've been here over the years, a lot of posts about bicep tendonitis & flare ups & all the misery that brings.

When I was in the hospital for that mini stroke in December, they took my blood pressure in my bad arm every 15 minutes for 3 days.  Do the math - that's a lot. & if you know, you know - those hospital blood pressure cuffs are made from some torturous evil creature.  They choke the will to live.

Think of that tight compression around a muscle that is already damaged.

I came out of the hospital with the biggest flare up of my life.  I'm talking, couldn't even TOUCH my arm. I thought for sure there were bruises.

Nothing has been the same ever since with my arm.

The pain has gotten more severe in the bicep & the pain in my shoulder has gotten even worse.  Now, before, I would hurt right around the armpit area of my arm. I would usually put a pillow in my arm pit & put pressure & it would give some relief. Nothing gives relief now.

I can't stretch my arm to full extension - I get spasms in my arm that shoot down to my hand causing me to drop whatever is in my hand (which is really fun when I'm putting on mascara!) - I can't lay on it & laying flat at night makes it even worse for some reason.  & the topper, I can't raise my arm over chest level.  So try fastening a bra, or washing your hair, or pulling up my pants. I can't vacuum with the pushing & pulling in my right arm, cant wipe counters, cant get wet laundry out of the washing machine.... all sorts of little things you dont think about until you do it & end up in tears.

I called my orthopedic that I've seen through the years. He really is the best... & because of that, they gave me a "rush' appointment..... 8 weeks out. Are you freaking kidding me?

I told them I would see anyone in the practice - nope - that was still the earliest appointment - which I'm sorry. LIES! I dont believe that for a hot second.

I thought I would make it. Fine. I'll deal. In my biggest dreams, I thought, it'll even be healed by then & I'll call them & do a Pretty Woman move ....

Well, joke was on me because my arm has gotten so much worse. It wakes me up every evening around 2 am - & I cant get any relief. I sit up & cry for like an hour or 2 every evening in the middle of the night.  My dogs have been very concerned.

Driving into work on Monday, I dont know why I hadnt thought of it before, but I was like, wait, my niece had shoulder surgery... who did that?  So I call my sister in law & ask her who did the surgery & she gave me the name. I googled them, got on the web site, sent them a message regarding an appointment & no joke... it couldnt have been 60 seconds & my phone rang.

I told them the situation & they said, "Can you come in tomorrow at 9am?"

The next morning couldnt have come soon enough & I go in & the staff was so super nice & the doctor was very straight forward - all business - right to the point.

He was moving my arm, making me do crazy things - like raising it up! How dare he! But he even said my shoulder was so tight & then said, "Well, you have a little bit of a mess going on"

They pulled in the ultrasound machine & he showed me all sorts of things - that I couldnt make out - because I'm not doctor.  Was that a boy or girl in my shoulder? I'm pretty sure I saw an eye ball....but he pointed out that I have bursitis in my shoulder, my bicep muscle is so inflammed that its ready to rupture, and the kicker, my rotator has a tear in it.

Oh yeah... he said my shoulder feels like its going to freeze if we dont get everything under control soon. 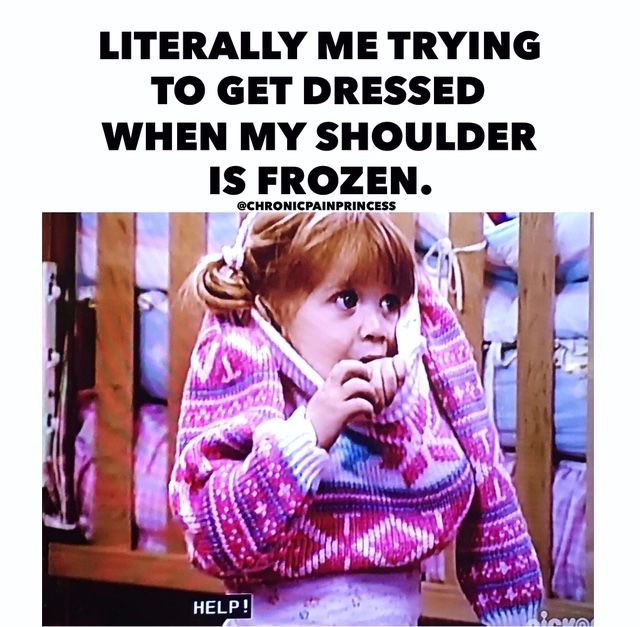 His first question was, "how do you feel about surgery?" & I was like, "ummm.... I have a job" & ironically, I'm getting ready to cover for someone who is going to be off for shoulder replacement surgery.  I asked if we could do all the things first & if it didnt get better, then we'll talk surgery.

What is the response to that?  Let's bring out the longest freaking needle I've ever seen in my life.

They pull out the ultrasound machine so he could see where it needed to be injected. I told him I was starting to feel anxious & Mr. Straight Forward said, "understandable"... good bedside service right there.

Honestly though, the nurse stood there with some sort of cold spray & started coming at me like she was ready to mace me in a dark alley & went to town on my shoulder.

& before I know it, I see a needle inside my arm on the ultrasound machine. How did that happen? It was really bizarre..  Stupid me - I said, "Well, that didnt hurt"... & then he proceeded to move the needle around & injected the shoulder, the rotator & the bicep & each injection, the pressure....ohhhhhh the pressure.

He got the needle out & all of a sudden, my arm was like REJECT REJECT REJECT!!!!!!  It started getting spasms inside & I just had to grip my arm & take deep breaths. Honestly thought, it wasn't horrible.  It lasted for like 20 seconds & then it was OK.

As of right now, I'm not feeling much difference with the shot... that's discouraging.  But I'm hoping today is the day because they said it could take 24-48 hours before you feel relief.

& I have my first physical therapy session scheduled. Which... that's a whole other thing. Why are places like that only open during basic work hours. Dont they know people actually like... work? So I dont even get in till 2 weeks & even then, I have to leave work early... I need to find a PT that is open later.  Why are things so hard???

So yeah - in all this crazy - did you catch the gratitude? Probably didnt sound like an attitude of gratitude - but it was there.

I'm so glad I have made it this long in so much pain.
I'm glad I thought to reach out to my SIL
So thankful how fast I was able to get in with this doctor.
Glad to find out everything that was wrong - gives us a gameplan.
Thankful that the doctor is trying out options before rushing to surgery.
Thankful the shot didnt make me scream bloody murder & make me reflex ninja move on the doctor.

& honestly, the doctor told me if I had waited to go to my appointment that is still a month away, he said my bicep would have definitely ruptured by then & my shoulder would have been totally frozen - which apparently is even more of a nightmare.

Which, add to the list that things could ALWAYS be worse.

that's the latest.  Who ever said life is boring?

Have you ever had any arm/shoulder issues?

What do you do for relif of aches & pains?

Do big needles going through your body freak you out?

OK - tell me something good about your week!

Link up with me & Jen