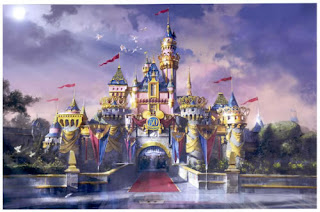 I am a self-proclaimed Disney Fanatic - love the whole "Princess" thing - love the atmosphere at the parks - just love the way they can make an adult feel like a kid again - no matter the age! But right now, I'm mad at Disney!
Alaina - our middle daughter, received an internship once she graduated from Indiana University to work at Disney - which was an amazing opportunity because she wants to go into producing or directing. What a way to get your foot in the door - become part of the Disney family & you can branch off in so many ways - to the ABC family or ESPN - just so many opportunities! Well, it wasn't as glamorous as it would seem, but Alaina was hanging in there - enjoying seeing the kids at the park more than anything - she's always been a natural with the kiddos!
Now Alaina has been living in the "dorms" down in Disney & they have a "NO TOLERANCE" program. That's good to know for the safety of all the people down there. Well, Alaina has been dating a police officer & one night he took her home - well, he has his weapon on him & it was noticed so Alaina got kicked out of the program because of this no tolerance system they have in place & the rule of no weapons on campus! Its not like she was stowing guns under her bed - or they were running around like gun slingers - he had it in his holster & just didnt think anything of it - its second nature to him. Doesn't matter - No Tolerance means No Tolerance!
Its frustrating because Alaina has now moved out - another girl is already in her dorm - & she's trying to figure out where to go to from here. It doesn't seem fair - mainly because she's our family - we want her to be treated fairly - but I can see & understand that rules are rules! Isn't it funny how you look at things differently when its your family or friends that get hurt? But I guess the rules were there for a reason - so what are you going to do? We're just praying now that God will lead Alaina to where she's suppose to be - & apparently, that ain't Disney!
Who knew Mickey Mouse was so harsh?