Does this mean I'm Betty Crocker?

So I have been trying more & more things in the kitchen...

Its fun when it works out well

.. I think for the most part, everything I've tried has worked...

Dont ask The Hubs - he's kinda picky & doesnt prefer some of the things I make.

A veggie quiche I made one time?  I think he gagged... I thought it was pretty good

But I found a recipe in a magazine the other day & thought it sounded like yumminess.

Got all the ingredients 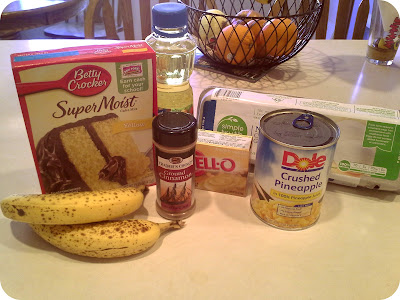 Now, I'm a fanatic when I follow a recipe.  I get all the things out - measure it, read over the recipe again, lay everything out, read it again....  & then re-read the recipe to see where I'm going to add that ingredient & even try to put them in order.

Yep - I'm a little OCD when I cook/bake

I just know if I do this on my own, I'm messing it up

My kitchen also looks like something on a cooking show - with all the ingredients there ready to dump in the bowl.

I just need Kelly Ripa next to me so I can think I'm on "LIVE! with Kelly & whoever took Regis' place"

scratch that... I dont want Kelly Ripa next to me... she's itty bitty... I'd look like a giant standing next to her.

Back to my baking experience.

I'm laying everything out, when I noticed I havent read through the recipe to see where the cinnamon goes. 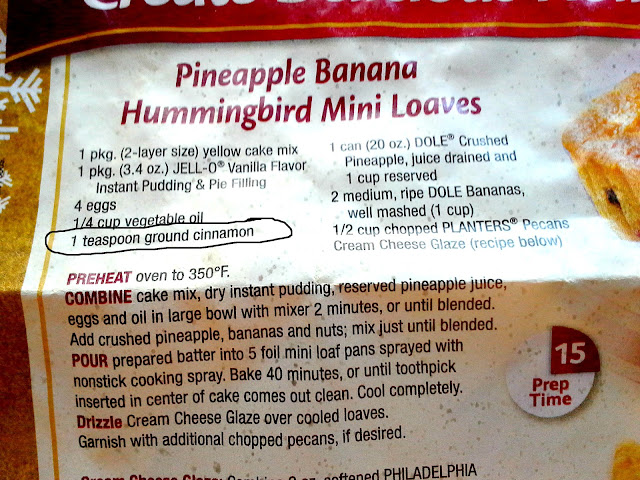 Do you see it?

I thought this turned into some sort of mental game that I was loosing at.  Know those quizes where you have to count all the 'o's' in a sentence but there are always words you dont really count them in... that's how I felt...

I take the recipe to Ricky to see if he sees it... then we both feel like we're loosing our mind.

What do I do?  Is it supposed to be in there?  Or is the ingredient the mistake?

IN YOUR FACE stupid recipe creator.... they thought they had me... I succeeded

its the little things in life that make me happy

Ever have any recipes that were totally off?

You good at making up your own recipes?

How big do you think Kelly Ripa really is?