The weekend that has me wanting Tom Hanks as a Navy Seal....

* Had to do it... stopped at Starbucks for my Café Mocha... & laughed at the total


* It looked like a winter wonderland on the way home.  Seriously, I have never seen anything like it in my life.  The trees are covered in ice & the sun was actually shining (hello Mr. Sun - haven't seen  you in forever) ... the light hitting the trees was something I said I would imagine seeing in Heaven... or in Disney World... one or the other.

* Tried to get a good picture of the ice in the trees when SOMEONE wanted some attention ... I didn't even know he did this until I looked back at the picture a little while later...

* These are the pictures he's used to me taking of him though....

* Forgot the opening ceremonies of the Olympics started... I was busy watching Jerry Seinfeld's show on the web - Comedians in cars getting coffee ... I love that webisode.  Tina Fey & Howard Stern are on this season.  Jerry Seinfeld is always going to be top notch on my 'people' list.

* I did end up turning it over right when the USA team came out & watched a few more minutes of the opening ceremonies... but it bored me to death & I knocked out.

* I woke up with the room light... that is something that hasn't happened in WEEKS.. if not months.  Sleep... ahh... sweet sleep.  Now, don't think that was a sleep that went straight through the night.  We still have to get up & take Sydney outside with her leg.  Ricky carrying her - me being the door opener... we'll keep doing it though.

* All the other dogs are just loving on Sydney & sticking with her.  Its so weird because Zoe is a hermit - she stays to herself & rarely comes out.  She's been sticking with Sydney ... not leaving her side.  She even has been sleeping next to her - which Zoe NEVER does... they have an instinct, don't they? 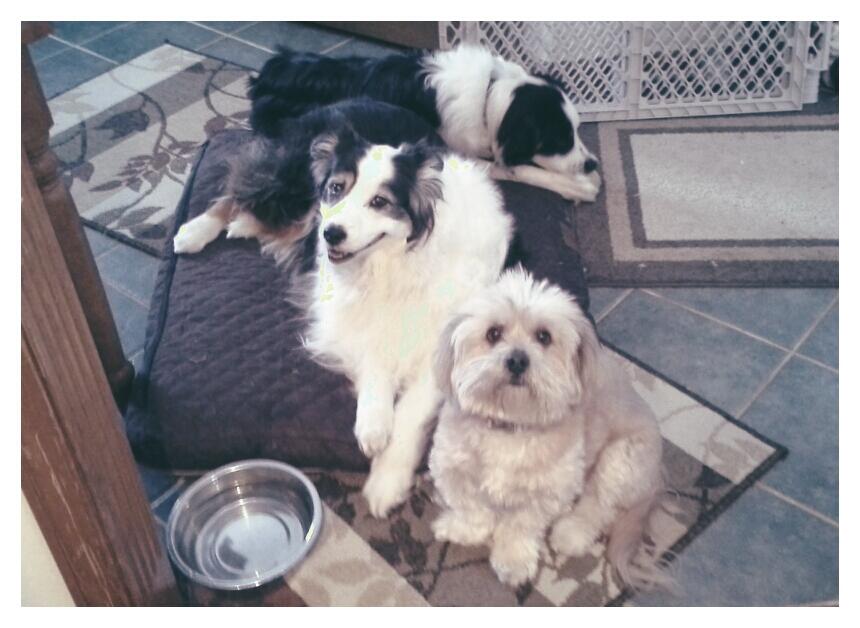 * Tried knitting a small project.  I've learned I can knit like 4 small rounds & then my bicep tendon is on fire & miserable pain. SOOO not fair.

* Yes - this is how Bruno gets on my pillow on the couch & sleeps... hey, whatever works.

* Skiathlon ... goodness gracious... I watched the women's competition while on the treadmill. It made me out of breath to watch them.  The hills - the distance - like a small marathon in snow... with skies on.  That's gotta be tough.

* Took a shower after my workout & needed to go to Target.  So hair went in a pony tail with a baseball cap & no make up at all... I was sure I would see someone I know - I always run into someone when I look horrible.  This time, success.  I was a ninja.

* We had a movie night watching Captain Phillips.  I was holding my breath the whole time.  The good thing, I knew it was a true story & he didn't die so that gave me hope.  But wow... The things our military does, can do .... & we have no idea...

* Tom Hanks is pretty awesome too

* According to that logic, Tom Hanks needs to be a Navy Seal

* We skipped church to take care of Sydney & then made it to our Youth Middle School class...the big topic of the day?  The best APP you have.  The world we live in - only 1 out of 15 kids didn't have a device that you could put an app on.  Welcome to the next generation.

* Ricky & I joined a new small group that meets on Sundays after church.  It helps that we already know everyone in the group so we were instantly comfortable & loved hanging out with these people.  Not to mention, they had eggplant lasagna... YUM!!!  & a table full of food.  Jesus said, "feed them & they will come" - right? No?

* Spent the rest of Sunday taking care of our girl.  Syd is really doing OK - just can't walk like she used to.  She CAN get around, but we prefer her not to. Don't want her falling, tripping & hurting her bones more.  So we carry her most places - & she's fine with that.  When she sees Ricky, she'll even hold her leg up & then when he bends down, she jumps into his arms.  As long as she lays where we're at, she's perfectly content.  She still barks at the TV, barks at Harvey when he runs around her, still eats great, still loves to get loved on... so we'll keep her happy & comfy for now...

* I tried watching Narnia... couldn't do it... I got to the point where I knew Aslan was going to sacrifice himself... nope... turn the station... I tried. I watched over an hour of it.  More then I ever thought I'd watch.  (FYI, I'm sure you can search my posts & see somewhere why I HATE Narnia & how the cartoon of the 70's scarred me for life)

* Downton Abbey news
* I was cracking up at the Dowager Countess when she had to play cards (Yippee)
* Poor Edith ... I was so glad she talked to her Aunt
* I still hate Thomas & his sneaky ways
* Mrs. Hughes is every sort of AWESOME!
* Mr. Bates figure it out?
* Mary covered in mud taking care of pigs?  A good look for her.
* Let's see the Lordship in America.. that means Paul Giamatti ..

Happy Monday everyone... hope your weekend was great...