The weekend I felt like I was in a Walking Dead scene....

Question:  Has anyone else felt horrible a month after the stomach flu? ... geez.  I knew that stomach bug kicked my butt, but ever since, I am still having horrible waves of nausea & stomach cramps.  It feels like I'm getting the stomach flu all over again, but it only lasts for like a half hour & then I'm fine... until it hits again.  All this started ever since that stupid stomach bug.  I guess I'm just the lucky one that's going to have issues with a simple (but not simple) virus.  Leave it to me.

All that to say, I'm starting my Monday off feeling like I'm ready to puke.  Fun times... & wildly appropriate for a Monday.

Maybe I'll just call it a weekend hangover.  This weekend was jam packed for sure...

let me do a quick recap before I feel like I have to run & dunk my head in a bucket somewhere.

Friday, I was glad to get home in time before storms came rolling in.  & by getting home in time, it means to wear Harvey Dent out by throwing the frisbee, working that energy out before the rain stopped the playing.  Not that the rain would stop Harvey from playing - he'd go right out in the middle of a tornado to play if it were up to him. Nothing comes between a dog & his frisbee. 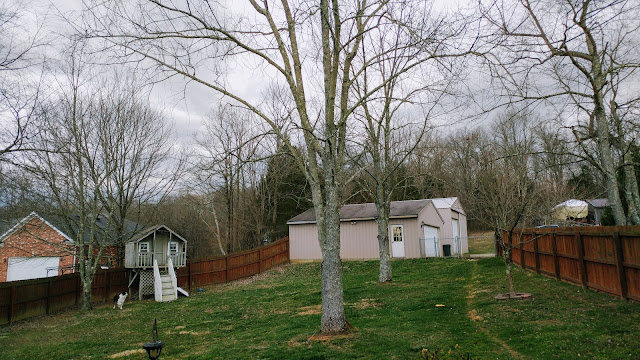 I spent the rest of Friday night on the couch watching The Vampire Diaries (so close to the end!!!) & caught up on Nashville - WHAT THE HECK!?!?!?!?!?!?!?!  Any other Nashies out there that is sort of confused why that happened?  & how they will carry on????

Saturday, Ricky had to work, so that left me some time in the morning to clean the house.  Something I only like to do when he's not there.  Isn't that weird?  But it always makes for a fun surprise for him when he gets home.

I got things straightened up & then took some time to dabble with my lettering & practiced my memory verse for the week.  In our new Bible Study, there's a verse that goes with every week of the workbook. I think I'm going to try & do something creative every time... it helps me memorize things when I can be creative with it.  Plus, its always good practice to get better at lettering... which I know I have a LONNGGGG way to go.  But Rome wasn't built in a day, right? 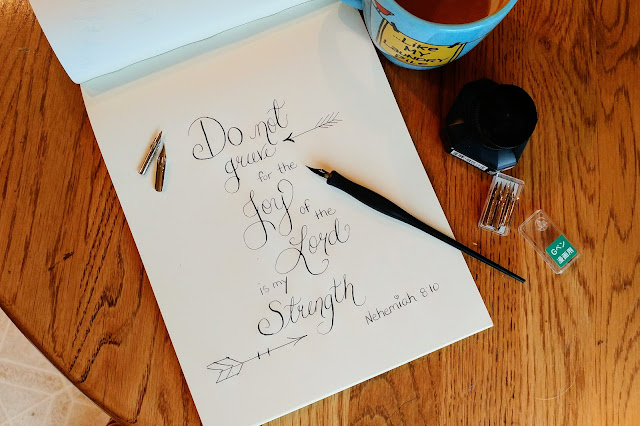 except my treadmill was like, Nah, I hate you. Always have. All that pounding you do to me?  Here's my revenge.  In 5 minutes, it jerked so hard & threw me. I knew there was no way I was getting 7 miles on that thing when I nearly broke my neck in less than 5 minutes.

I was in a panic. Didnt know what to do... thought about running down & joining Planet Fitness for a hot minute & then just sucked it up & dug out my fleece lined pants, my thermal stuff & headed outdoors to run. Old School.

MANNNNN - it was cold. I honestly wouldnt have minded the temps, but the wind was what was brutal.  It was like cutting my face in two.

Plus, it was scary as HECK.  I've never been at this park where there wasn't anyone.  But this time - there was NO ONE.... EXCEPT one man.  Who had ridden his motorcycle & was parked up under this shelter area - & who had made this fire.  Weird! I just knew he was going to kill me & throw me in the fire.  Yes, I watch too much TV.  Or news.  The news is basically scary in itself.


But after circling that loop, I readjusted my path so I didnt have to go past him anymore - but still kept looking behind me every 5 minutes... & searching the tree paths I was running through. I basically felt like I was in a scene from the Walking Dead.  SCARYYYY!  Needless to say, my heart rate might have been up a notch or two from the fright.

But I got it done!  Yes. Thank you Lord - give me a hot shower & a hot cup of coffee to celebrate. 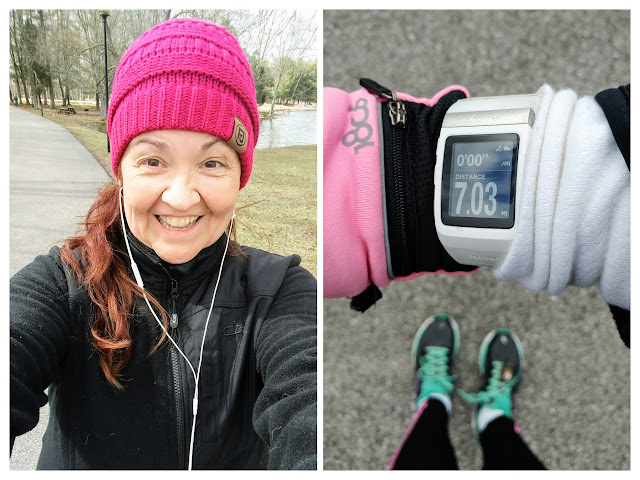 The rest of my day was spent knitting more stuff & doing a 5 episode marathon of Riverdale.
Which is truly corny... but I was so caught up in it.  I'm going to need another corny guilty pleasure after Vampire Diaries goes off.  & no, I'm not 16 years old.  (at least not in numbers on the calendar... my mind? Maybe)

Sunday had me back at church with those amazing young ladies....

& then left church to head to another group of amazing ladies with our Joy Sisters...

& finally had to stop at Target on the way home to pick up some things for Bruno. Our poor little guy gets these horrible skin infections on him & I felt like a walking first aid kit with all the things I got to clean him up & try & get him feeling better.  If its not better by Wednesday, off to the vet we go.  His favorite thing in the world.


Ended my Sunday by NOT watching the Oscars. I couldnt really care less this year.  I knew it was going to get political - & yep, I get everyone has a right to their opinion, but to me, entertainment has taken a weird turn.  I like entertainment for just that - entertainment. I dont like entertainers who think their opinion is the end all, be all.  .. by gones - just me... The beauty of America - I watched The Walking Dead instead. I mean, I just felt like I lived it the day before - I needed to brush up on my combat skills in case someone did pop out from behind a tree.


So - how was your weekend?

Did the temps drop out from under you this weekend?

Do you watch Nashville / Riverdale / The Vampire Diaries?

Ever have the stomach flu ruin your life for a month?