Today is my daddy's birthday.

He would have been 74 years old today.

I think of dad every day... every single day... & I've been thinking of some of the things that dad has taught me in my life. The things that have stuck with me growing up & will stick with me as I continue down the journey of life in this world.... so as I think about him especially on his big day, here are some of the gifts that my daddy left me.

Try everything
My dad was all about trying things out.  He had no fear of things (except trains - for some reason, Amtrak's freaked him out - which is so weird) - or I should say he was all about trying new things out.  If you were to call him & ask him to go take a painting class, or go on a road trip, or go learn to ride a camel, he'd be up for it.  He'd be up for anything. I think he'd even jump out of a plane if someone asked him too.  He had coworkers that asked him to go play golf one time. He'd never played golf in his life, but it was a new experience & dad was all about trying out new things... & he liked it. I dont think he ever played again but he could mark it off his list of things he's done in life.  He checked a lot of things off.  I need to learn to have more of that adventurous outlook. Dont Worry
I talked about this at dad's funeral - but dad really was a person who just seemed to let things roll off his shoulder. I really dont remember dad holding grudges, or dad sitting up worried about things.  If I talked to him about things I was worried about - & I was the worrier of the family so I was always talking about things I'd worry about - he would just remind me that in most cases, there isn't a lot I could do in a situation.  God was in control. Things would play out as they should - so why worry about it - why waste the energy.  I can honestly hear dad's voice in my head still saying "Dont worry about it Beck".... I am still working on this dad, but trying for you. 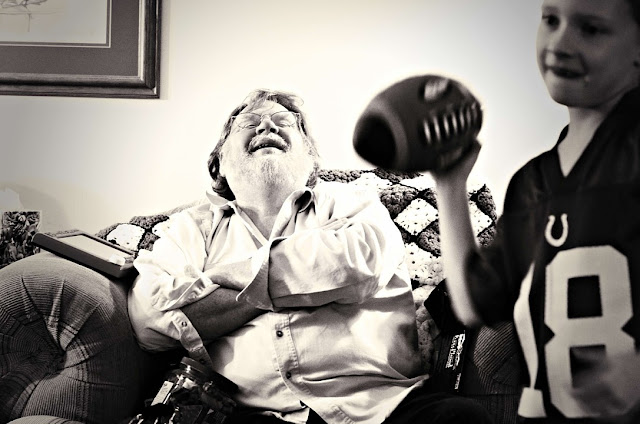 Work is important, but dont make it everything
Dad was a worker.  A hard worker.  There's a famous story in our family that dad was rolling in the floor in horrid pain with a kidney stone, & it passed & he popped up & was excited he would make it to work on time & not have to take a day off.  My dad never missed a day of work. Never.  If he was sick, he'd tough it out.  He just knew the value of a job & he really instilled that in me & my brother.  But it was funny as dad retired & he'd worry about my brother & I as we would always make it to work, no matter what - if we were sick, if the weather was bad, we'd make it.  Dad would call me & tell me, "Work is important, but its not everything" & he'd tell me he wanted us to be smart & safe, but it was too late. Tony & I have that work ethic instilled in us.   One of the last texts I have on my phone from my dad is when I went back to work only 1 week after my surgery & dad text me to see how I was making it through the day & told me that if I was in too much pain, he'd come drive downtown to get me & we'd just leave my car in the garage.  That text means the world to me now. 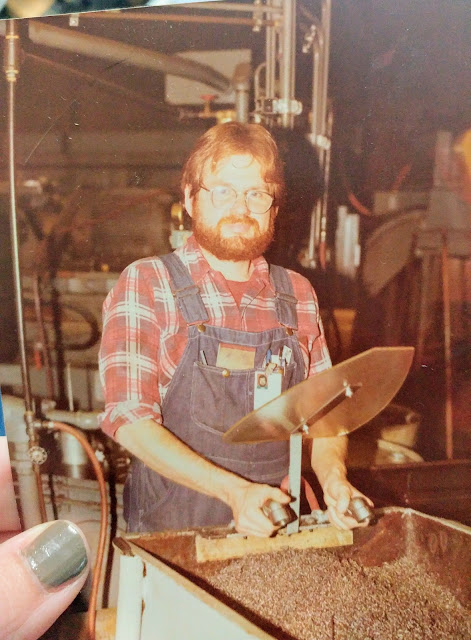 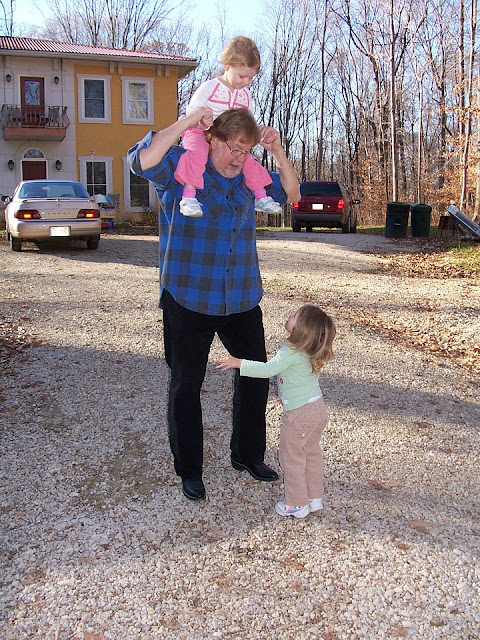 Show up for others
I think this was the Baptist deacon & the grandson of a pastor instilled in him - but my dad was all about showing up.  He knew it was important to let other's know they had someone there that they could count on.  No matter the circumstances.  I can remember dad going to the funeral home when Ricky's friend Ernie passed away. Dad probably met Ernie once in life, but he showed up - for Ricky.  He would show up just to let people know they weren't alone.  He'd especially do that for family.  When I had to go to the ER for my abscess - dad had literally walked out of the hospital after his own antibiotic treatment of sitting in a hospital chair for over 3 hours, but turned right back around to sit with me in the ER - & came back again when I had my surgery & waited. Dad was also there at the twins games & practices - to show support any way he could.  There really is something about seeing a familiar face next to you - even if words aren't spoken - just a hand to hold, a shoulder to lean on, a hug - just the presence knowing someone's got your back. Pies are good medicine
I've talked about that on here before so many times - how when life was tough for me, I had a Hershey pie coming my way from my daddy.  & Ricky? His pick of 'medicine' was coconut cream pie.  Dad was about feeding the soul with sweets.  & it did make everything better.  After my 2nd surgery after dad passed away, I literally cried because I didnt get a pie.  Not because I needed the pie that much - but because I missed the heart behind the pie - the idea that my dad would take the time to make something to just bring a smile to your face.  The taste was just the bonus - the icing on the cake, or pie if you will.


Have a dream always
My dad dreamt of something for as long as I could remember.... he wanted to have a horse farm for special needs children.  & "Special needs" to him meant anything. From children that had disabilities - to children that didnt have a home - or came from abusive households. He just wanted all the children know they had somewhere they could go - & teach them the power of horses & working on a farm.  The work that it takes to care for a horse that builds character & the love for horses & the love they can give in return.  It was something he talked about & would dream about how it would look.  I always wish I could win the lottery just so we could make some form of this happen. Dad would have been amazing at leading this.  In all this, it reminds me that a dream is never 'aged out' - Dad never stop dreaming it because he got older & he never gave up dreaming it could happen.  It didnt happen how he thought it would, but I do think he touched a lot of people's lives even with his horses he had.  Neighbors, people coming down the street, a stranger walking by - he'd talk to them & take them to his horse & talk to them & become friends - no longer strangers - everyone welcome to his place.... dad played out his dream however he could.  I still wouldnt mind to pick up his dream somehow if I win that lottery one day myself.

Stay informed & vote
I can remember being little & always knew when it was election day. Playing with neighbors would have to take a back seat because I'd have to ride with my parents so they could vote.  It was always a big deal & I loved that it was instilled in me to let my voice be heard in the voting booth.  Dad was always on top of the news.  He'd sit & watch local news or any of the big news stations to stay up on the latest happenings.  He always felt it was important to stay informed & know what was going on around you.  We never really talked a lot about politics in our home like most people probably do - but we did talk about what was going on in the world around us.  I know the last election that was so hotly talked about, I did have a conversation with dad about his views on it & he really did have interesting points that made me think.  Just showed me that dad always kept the values of what voting meant to him & that he was on top of knowing why he was voting a certain way. I appreciate that reminder. 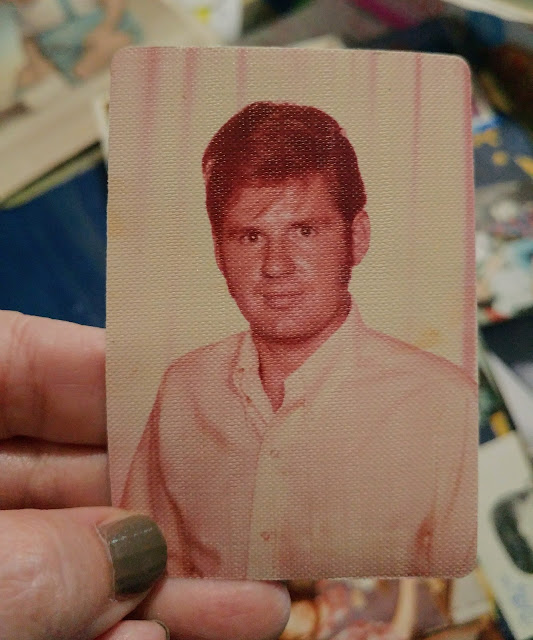 Tough it out
Dad suffered with a lot of pain with his hips & shoulder & knees through the years.  & do you know it never once slowed him down or stopped him from doing anything.  He could hardly walk without a limp & sometimes would stumble where he couldnt even lift his legs at one point, but he NEVER stopped doing things, never stopped going places. never once let it slow him down.  He knew life adventure was far better than any pain - any moment with loved ones was better than any missed opportunity.  I've said it before - the Wood men are tough men.  Dad was a testament to that himself.  He'd never let the aches & pains of this life hold him back 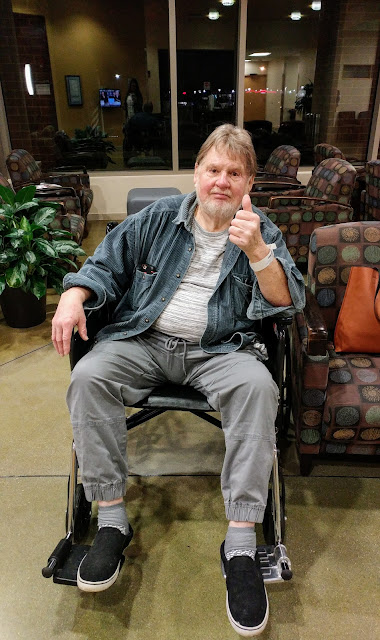 Know where you're going
I heard it so much in my life, "You're not going to get out of this world alive - you better know where you're going" ... I've talked so many times about growing up in church with dad - & my dad being raised with his grandfather who was a minister.  Dad taught others his whole life about knowing who Jesus was & assuring where you were going when you left this world - because as he said, you will leave this world.  Dad didn't go to church  as much as he got older, but he still listened to sermons at home, & he'd definitely listen to old time hymns & gospel songs - & always sent me ideas for youth lessons & things to talk with the girls about.  My dad knew where he was going - & I know where I'm going some day as well, because my daddy raised me in the ways of the Lord... & I am so honored I get the chance to tell others as well.  I am thankful that I was raised by a man who taught me who Jesus was from the moment I was born & raised knowing that Jesus was my Savior.  I always say that I never "came to know Jesus" or "Found Jesus" - because Jesus was just always a part of my family.  The most lasting, eternal gift my dad could have ever left me.

Today, on his birthday, I am just reminded more than anything of the
gift of a father's love....
How priceless & precious it has been in my life ... how it has shaped me. Happy Birthday Daddy!
I miss you!