The weekend we said goodbye to ANOTHER family member....

These are not fun weekends recently.

Having to say goodbye to yet another member of our family.... it's just a lot lately.

Friday, I left work & headed straight to the funeral home. I wish I could have taken time off to be there all day but with all the medical stuff on TOP of all the tragedy in my family, I couldnt take another day off.  So 4:30 came & I got to the funeral home as soon as I could.  And got there right when my brother got there with my mom too.

It just all felt surreal to see dad's brother there.  Like this has all been a cruel joke between brothers or something. 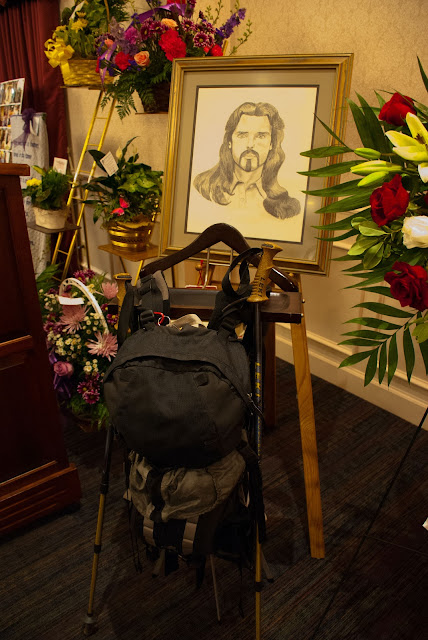 The hours flew in the short time we were there, seeing familiar faces & giving hugs & love & before we knew it, it was time to head home.

It was an early wake up call for us on Saturday to get ready & get back over to the funeral Saturday morning.

The service was just so Timmie. He had talked about what he wanted & planned so much of it himself & you could see the touches he had wanted.

His wife's family is such a talented bunch of people with the most amazing gift of music.... so a few of them came to sing some of the songs Timmie had picked out.  Which really poked my heart because one of them was the song they had played at my grandmother's funeral & another song was the song I had picked out for my grandfather's funeral (Timmie's mom & dad)  It just all seemed to be a full circle, family connection sort of moment. I know that's why Timmie chose those songs. 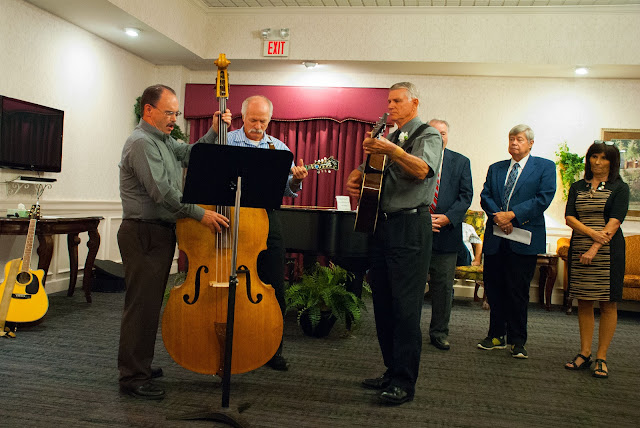 & there were a few preachers that spoke & a family friend of Timmie's & then his daughters. Oh man... that was tough to hear.  But they told me that since I spoke at dad's funeral, Timmie wanted them to talk at his.  & they gave me a "Thanks Becky" for that too - HAHA. Sorry girls.  But they did an incredible job of honoring their daddy. Spoke so beautifully about him & how much they love him.

After the funeral, it was time for a long ride.... Timmie was to be buried in the country where his wife's family is at , in a little country cemetery down a back road.  It all is just perfectly Timmie.

I ended up riding with my brother & one of the twins on the way & the time really went fast & we just had a really good time talking & chatting & making our way. Who knew me & my brother could be in close quarters that long & not kill each other?  Good to know! LOL 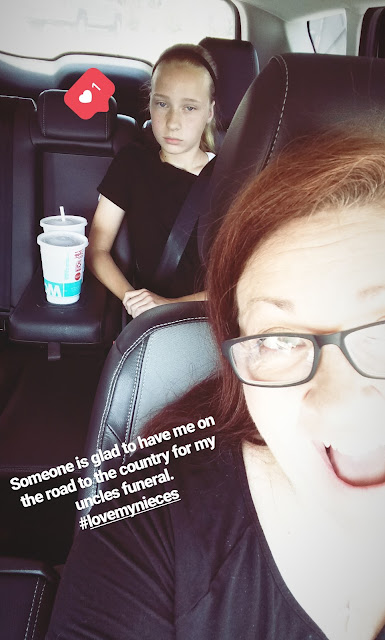 It was HOT! I mean, HOOOOTTTTT!!!! The temp was 98 degrees & we had to wait for everyone to make it down from Louisville - an hour & 40 minute trip.... so everyone tried to scatter in the shade until the last pall bearer arrived. 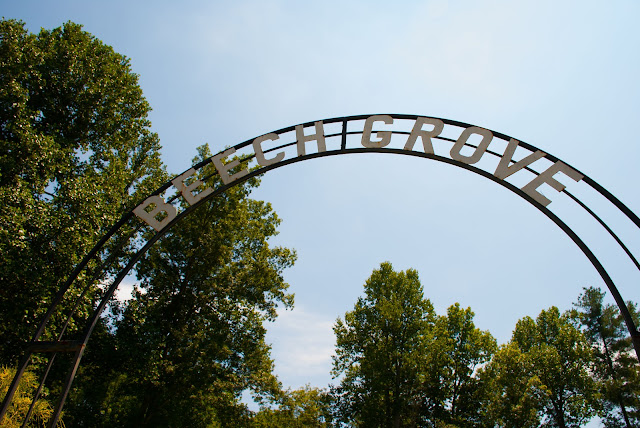 This little one gave no cares that it was smoldering out. She was just about chasing butterflies & looking at the bugs that got under the tulle of her dress.  She made the day so much brighter for people's broken hearts.


Luckily, the little church at the side of the cemetery was open & we could go in there & use the bathroom & soak up some of the AC.  It was the cutest little church I have seen.  I can just imagine all the old fashion hymns played  every Sunday in this place. 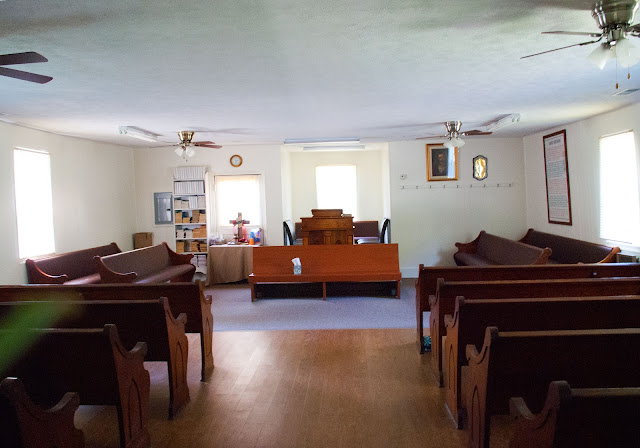 The last one arrived & my aunt's brother spoke a few words about Timmie & why he was being laid to rest there & it really did end his service beautifully when everyone sang Amazing Grace one last time together. 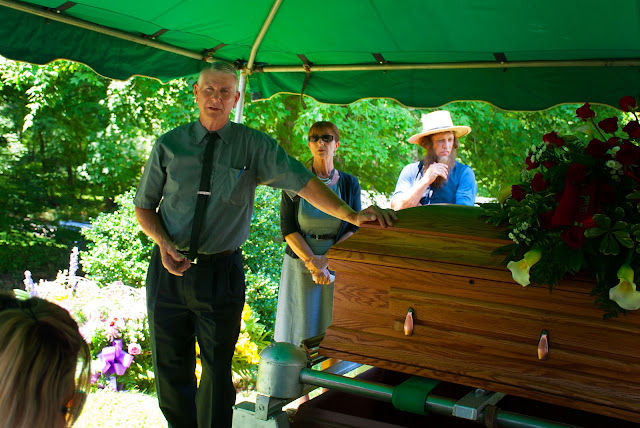 Tony & I walked across the cemetery to my aunt's brother's home - he does monuments & we looked a bit for some ideas for dad's.  We also were in love with his little shed he had on his property. I took a pic because I now want one of these for a She-Shed.  Let's see if that happens. 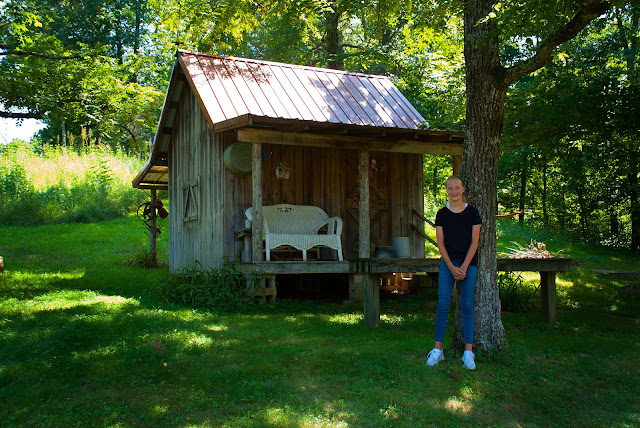 All our family got together after the service to have some dinner before the drive home & we were wanted to go to somewhere local - get a feel of the small country atmosphere.  & you KNOW you're in the country when the special of the night was WILD GAME... which included rabbit & frog legs & quail. MMMMMM ....mmmmmm .... HAHA! 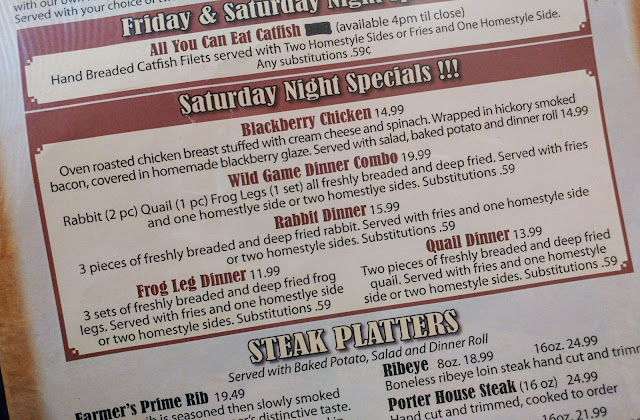 I was happy with my veggie plate.... & the sweet potato casserole that was COVERED in brown sugar. OH MY GOODNESS! So delicious. Country places know how to cook, don't they? May not know about calories or heart healthy food - but hey - when in Rome. 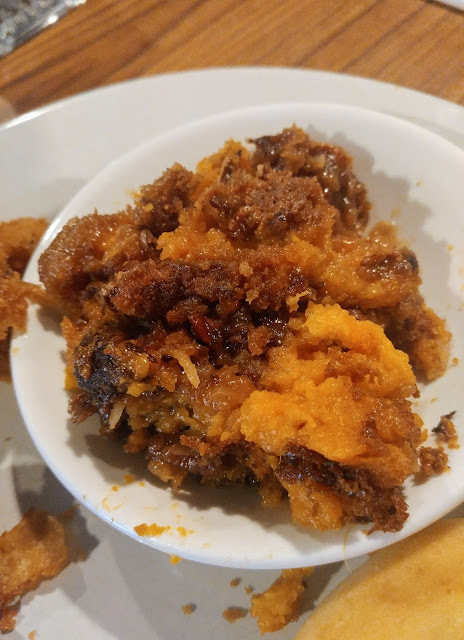 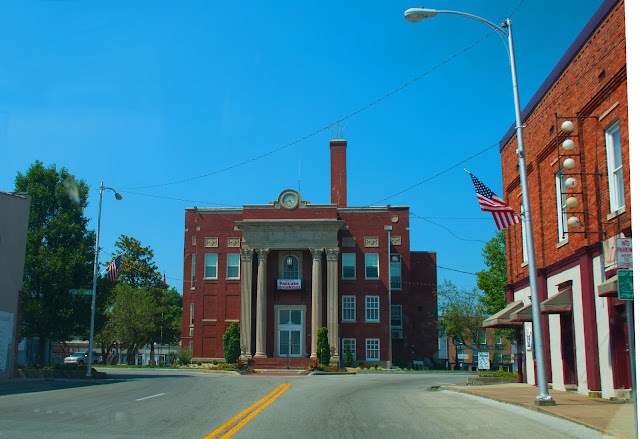 My brother & niece & I headed home & didnt end up getting home till around 8pm... it was a long day to say the least.  But I wouldnt have missed it for the world to say goodbye to my only uncle on my dad's side.

Our family is just getting smaller by the minute it seems.... 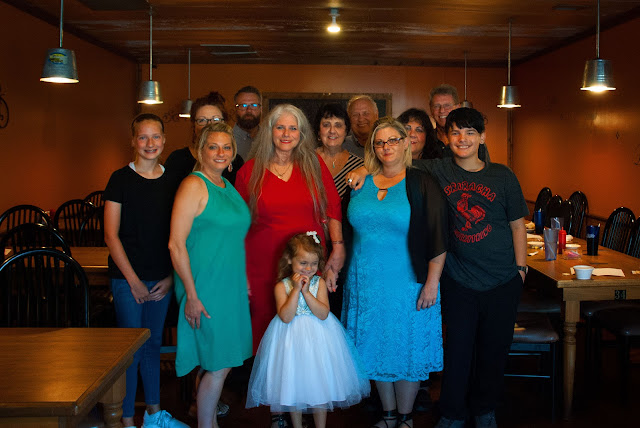 Sunday, I just wanted to stay in bed as long as possible.  & I actually did that for awhile with heating pads & ice packs all over my body. I truly think I'm falling apart.  Slowly & painfully.....

& then I uploaded pics of the funeral & started editing them.

I know some people may think that's sort of strange.... but my uncle was a photographer. I think he would have wanted it & loved it.  He also loved to document things (like someone I know... ahem, ahem....) & I know he really loved the picture I had taken at his own dad's funeral of his casket. He actually printed it out & had the print of it on his shelf at home.  & I had asked his daughter & wife if it was something they wanted me to do - & understood if it wasn't something they wanted captured. They did want me to & honestly, I wish I had someone do it for me for my dad's funeral.  It's a moment in your life that you remember so clearly anyways.

But Sunday just seemed to be laid back - or at least I tried to make it as laid back as I could.

I spent most of the day under a back massage contraption & was excited that Baby Ballroom just released a Season 2 on Netflix.  I love that show!  I feel like the guy & his wife on there are SNL skit characters. Seriously.  But that show was the highlight of my Sunday....

So we PRESS ON to a new week.... praying it goes smoother & kinder to our family.