OK - I find it sort of appropriate to follow the last blog that is named "How old am I?" with a blog entry like this!
We got Guitar Hero yesterday - OH YEAH! I've heard so much about this game from all the kids - & even adults & have always wanted to play it. Well, at Christmas time, I surprised Ricky with an Xbox 360 - & I got it mainly for "family" purposes. The purpose being - Julie & Steve have an Xbox 360 themselves & showed us while we were down there how the camera feature & Xbox LIVE works - so we will be able to see Isaac when we want & talk to him & see him actually moving - & he can see us as well - remember who Nanny & Pappy are! See - this "toy" has a higher purpose than just gaming for us.

So - off to the store to get the router we need to get the LIVE going so we can see that cute red-headed baby when I saw Guitar Hero & knew today was the day - we would be official rockers! We decided it would be our Valentine's gifts to each other - afterall, it will be promoting togetherness - & after so many years together, this is about how romantic we get (joking - you heard about my birthday & the cupcake & singing when I woke up). So we got it.
We get it home & pull out this guitar & it feels fun already just holding it! We put the video in & can I say - I was a natural! There's Ricky in his long-haired rock look & I'm kicking his butt! Me, in khacki's & a button down shirt & loafers! But, I ended up running my mouth - I'm a great trash talker - & soon the tides were changed. By the end of the night (3 hrs later) I was going downhill & Ricky was becoming a "Rock God" - no seriously, that's what the game called him at the end. He loved rubbing that in my face!
I have to say - whoever invented that game - kudo's! What a way to make adults feel like a kid again - all the while, playing music that we remember growing up! And I WILL beat him again - even if that means sneaking & getting practice in while he's away doing something - shoot, I bet he'll be doing the same thing! AHHH - Valentine love!
And today, all I have in my head is Cheap Trick's "Surrender" - I feel like I could almost pick up a real guitar & play it now! Watch out Rock World - here I come!

And hopefully, by tonight, we'll see Isaac on that TV screen grinning & waving at 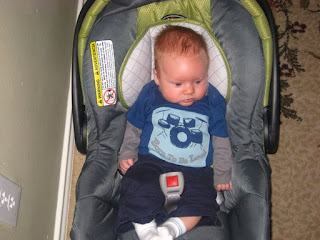 Nanny & Pappy - we'll just need to get him a little Xbox guitar now so he can play along! He already resembles his red headed Pappy! (yes, Ricky got him that shirt - & in case you can't see it - it says "Born to be Loud" - Ricky's training him even across the miles to be a little rocker!)