Good with the Bad

Its been a rough couple of days! It all started on Wednesday.
GOOD- Church was starting back for our Wednesday night gathering & I was so excited. I miss seeing these kids throughout the week & we had a new schedule of events that we were excited about starting - I was pumped.
BAD- I got so dizzy at lunch time. It'll happen all the time to me (no blond comments - even though I'm now red headed....another story) but this time, the dizziness would NOT quit & by the time I left work - I was having a hard time even standing. I ended up making it home & thinking if I could just lay down for a bit, things would get better. I got home, hid my head under the covers & feel asleep for about 15 minutes. I started to get up to go to church when, WHOOO - the room was out of control! I have not felt that bad in a LONG time. It was making me ready to faint, & nauseated & just the worst you could feel. I couldnt stand it - I got Ricky & he took me to the Urgent care center - which leads me to the....
GOOD - We pull in & there are no cars. Ricky thought they were closed. Nope, they were open & not one person was there!!! I went straight back & was out of there within 20 minutes - Yes, there is a God who watches over me!
BAD - I found out I have sinusitis, rhinositis (who knew that existed) & my ears were full of fluid which was causing the dizziness. At least I got meds to make me not want to barf so easily.
GOOD - I get home to have some friends stop by to give me the best news - they are expecting a baby!!! It's been something that's been prayed over for awhile so it was news that really perked me up. I was actually laying on the couch when they came over & when I heard, I bounced up so fast, I thought I was going to go back down in a fainted, black out heap. All was well though & I had to give hugs - OHHH, new baby, how fun!
Another GOOD - The next day, 2008 is fresh with sick days so I decided to go ahead & take one & lay around on Thursday - especially since I was taking antihistames which is never a good match with me. I'm so sensitive to meds. The medicine did take away the dizziness - not completely, but I was not at the level I was at before. I found out if I concentrated on something without moving my head, I was good - which brings me to another good - I COULD KNIT! The only thing moving there is my hands so my head was stable & I was on a mission to finish a shrug I had started on Christmas night. This leads me to...
BAD - UGGGG!!! I was so excited about this project - found the perfect yarn, waited until the perfect moment to make it - was so thrilled to see the finished project - & its too small! Now, I made the largest size on the pattern, which is actually one size larger than I normally wear, but since it was a shrug, I knew it would be over shirts so I went larger. Well, this thing will be good to fit a young teen - what the heck? I even checked my gauge & its exact! I don't know what happened - I'll get a small, tiny person to try it on so you can see it - its beautiful but I wont be wearing it...sniff.... 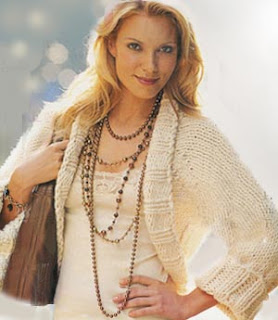 Here's the picture of what it SHOULD look like. Me in it? Looks like a piece of spandex where I can't lower my arms....that's frustrating!
Here's some other odds & ends Good/Bads over the past few days:
Good - my parents came over for awhile - my mom can always make me laugh no matter how bad I'm feeling & my dad finished up my awesome shelves in my Beauty & the Beast room - (I'll post pics later)
Bad - I've got to wear ear plugs now when I shower - that's irritating - try it!
Good - There's nothing like being in your pajama's until 6:00 pm - when you just take a bath & get in new, fresh PJ's - aahhh
Bad - Antibiotics - let me rephrase that - STRONG antibiotics - my stomach ain't a fan!
Good - There's nothing like being sick & having 4 dogs cuddle with you keeping you warm
Bad - My sweet, darling husband knew I was dizzy so he kept spinning in circles in front of me to see if it bothered me - I should have thrown up on him - teach him a lesson or two!