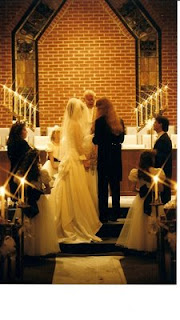 Wow - today, I've been married 13 years!!! (And I actually had to check my calculator to make sure that was the year we were on) Where does the time go?

Its so fun to think back on your wedding day. The build up to it - finding the perfect dress - having fun at showers - seeing all your family - hanging out with your friends - it all comes together for those few minutes of a wedding ceremony. For our 13th anniversary - I'll let you in on how Ricky proposed - it was so cute.
It was Christmas Eve 1994 & we had been dating for over 2 years at this point (3 years by the time we got married) & Ricky took me to the jewelry store to let me pick out a Christmas present - how fun is that!! I ended up picking out this beautiful gold band that was plain, but very pretty. He told me I couldnt get it until the next day for Christmas - OK - I can wait a day. So I went to my home & got ready & then ended up meeting up with Ricky later that night - we would have Christmas Eve with his friends. I talked them all into going to my church for the midnight service. Ricky at this point was not a church goer, nor his friends - so I was excited they came with me.
We're sitting in the church - it was beautiful - nothing but candle lights & just the whole Christmas atmosphere - its midnight - its crowded with families celebrating Jesus.....then, we get to the point where we all have candles & the person on the end lights the candle & passes the light down to the next & to the next.....I got my candle lit & as I turned to Ricky to light his candle - he slid my engagement ring on my hand & asked me to marry him!!!!!!!!!! It was so sweet!!!!!
We got to Ricky's home with his friends & I immediately called my parents. I said, "MOM - I got a ring" - she said, I know.....she thought I was talking about the ring I got to pick our for Christmas. I told her - No! I got THE ring!!! It took her a few minutes to get it! I asked Ricky if he had it planned & he said no - that's why he took me to the jewelry store to pick out something - he had no idea he was going to do it, but he said he just felt it was the right moment when we were in church. Did he carry the ring around waiting for the right moment always? I dont know. 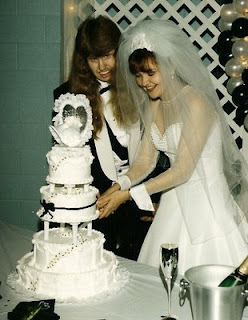 But its funny because I loved my ring & he said that he originally had another one & he took me past a window that had the exact one in there & he said I looked at it & said, "That is the ugliest ring I have ever seen!" - he said his heart dropped & he took it back the next day & got this one. Well - he did a good job on this one & he refuses to show me what the original one looked like.
So here we are after 13 years of marriage - 16 years of being together.......ups & downs - tears & laughter - good times & bad....I guess that's what marriages are made of - sticking together through it all.
Happy Anniversary Dude-y!!!
(Dang - we look YOUNG in those pictures!)