OK - I wont go on & on because I know alot of people dont enjoy looking at others vacation pictures, but I have to say something about it - it was just a great time watching how big our grandbaby has grown & what a handsome little man he is! He's such a little flirt! So put aside all the dental problems & migraines & let's focus on some good! 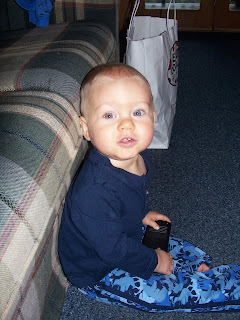 We got to our cabin - which the trip is supposed to take about 5 hrs - with a baby & traffic in Pigeon Forge & Gatlinburg - it took us about 8 hrs!!!! The cabin was beautiful & homey & had plenty of room for Isaac to crawl around & get his energy out! 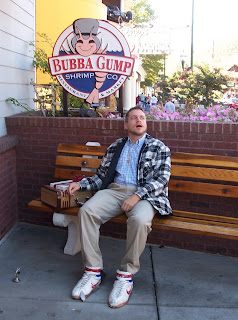 This is my son in law, Steve, doing his Forrest Gump impression. They have a "Bubba Gump Shrimp" which has the BEST shrimp EVER! Talk about yummy! And it was so fun because we were in there when it was 80's hour (which was between 2-4...hmmm - 80's HOUR? - go figure) Isaac was dancing to the music & loved it - his Nanny is going to teach him the best of 80's music - maybe throw in a few 80's dance step....do they make Parachute pants for babies? 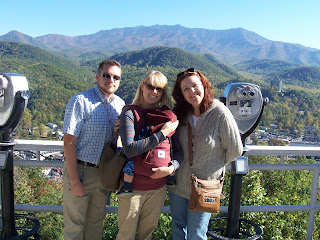 We rode a skylift up to the top of a mini-mountain & enjoyed the view. Isaac slept all the way up but it didnt take long for him to enjoy the view himself. It was perfect weather - in the 60's in the day, not a cloud in the sky & the mountains were starting to change colors - it was another reminder of how awesome God's creations are! 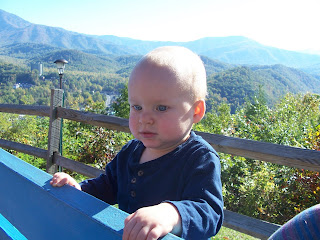 See - he wasn't about to miss out - didn't care about the mountains - too busy watching the people! 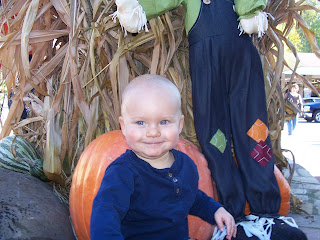 There were plenty of pumpkins & fun Fall decorations so Isaac got a great photo shoot! He drew crowds! People stopped & were talking about taking pictures of him themselves because he was too cute - see, I'm not biased! 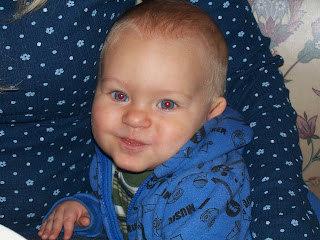 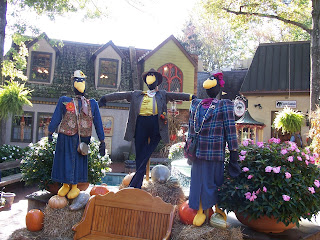 We had some awesome meals & Isaac was getting into the pancake action sitting next to his mommy. Everyone wanted to drive up to the top of the Smokies. I've been up there a countless number of times & with my headache & my ability to get car sick too easily - right after breakfast didnt sound like a good time for me to travel. So I stuck behind in Gatlinburg by myself to shop while they ventured to the top of ole' Smokie. The picture above is one of the little areas I found where it was all decorated & it was so fun in there. Being by myself - I dont meet a stranger. I shopped for awhile - found a discounted book store & walked out with 10 more books & then found a bench in this area. I then had some neat conversations with some amazing people while sitting here. People are just so nice & the world seems like a small place sometimes. It was fun having this time to myself - much better than throwing up in the car.....glad to meet up with my family when they ventured down out of the mountains. 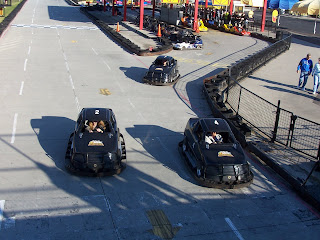 Of course, boys will be boys (& I guess girls will be girls - Julie & I spent a good half day shopping at an outlet mall) & they wanted to race some cars. Ricky is #2 - with Steve coming out of the gate last. They hit the Nascar center. They were such losers!!!! Literally - they came in last & 2nd to last!!! Of course, it was the cars fault....of course!!!! 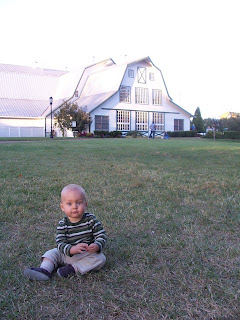 We had to stop & eat at the Apple Barn in Pigeon Forge - a tradition. There was an hour & A half wait (which was pretty good) & I just love this picture. Isaac got to crawl all over & just enjoyed himself so much outside. 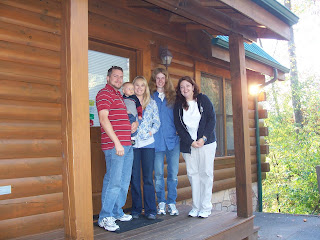 This was the last morning before we were leaving in front of our cabin. I cant even put all the fun times down - so many. I laughed so hard my stomach hurt at times - enjoyed Julie & Steve so much & of course, made me so sad to see Isaac leave again. We ate so much food that Ricky & I are probably going to fast the rest of the week. Besides the small yucky stuff with my dental woes - it was really a perfect trip......and plans are already in the works for next year!!!!