This morning was exciting in our household....why? Because it is Election Day. Its not normally exciting, but today - it had a special feeling in the air. You ask again - why? ( I heard you out there....) well, today was Ricky's first time voting - EVER!!! He is 46 years old & has never voted before - he only got registered a few months ago when he had to get his license renewed. He never really cared before & he didnt consider it an important thing. My nagging about it didnt change his mind (shocker!) but I think it hit him when his daughters who are all grown up & registered to vote this election started talking to him about the importance of voting. They are the ones who made the difference.....funny how things change - the kids teach the parent!

For me - my parents instilled the importance of voting. I can remember being in the middle of an awesome street-gathered game of Kickball & my mom & dad would drive down & tell me, "Get in the car, we're voting"...I obviously was too young to vote myself, but my parents took me each time there was a vote to go with them. I saw how important it was to them & how serious they took it. I can remember sitting outside the booth (that was when they had the levels with the curtain drawn.....) & wondering what was going on in there.....I was so excited when I got registered at 18....I could finally vote myself!
So anyways, we get to the polls....I asked Ricky if I could take his picture for his first voting. I got a not so pleasant look & I said, I'm taking it anyways so the picture is of him 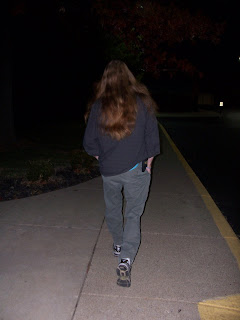 walking into the school & he's getting his license out. Great shot - I know....but that's the best I could get. I kept threatening him that I was going to take a picture of him voting at the booth. He would have died of a heart attack!!!
But it was SOOOOOO crowded & busy. I normally get in & out at 6:30 in the morning in about 5 minutes. The lines were so long that it took us about 45 minutes! The whole time, I keep pumping Ricky up asking him how he was feeling - if he realized how important this is - all he kept saying: "I'm going to be late for work".....aahhh, the patriotic feeling oozing off of him.
So Ricky filled out his ballot & waited for me so I could show him what to do next...we took our ballot to the little paper eating machine (that's what I call it, the way it sucks it in) & his vote counted!
We were walking out & I asked him, "So, how does it feel - you just voted in the biggest election ever" - his response......"I probably just jinxed the poor guy by voting for him".....aaahh, there's my positive husband that I love!
Get out & vote everyone!!! Happy Election Day!