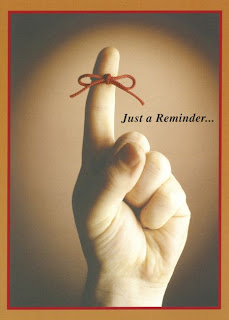 Yesterday, I heard the most powerful thing during the communal message - it hit me hard (love when that happens...)
Everyone has heard it said many times - especially during the time of communion - that Jesus took the bread & broke it & said "This is my body, which is given for you. Do this to remember me" (Luke 22:19)
Jesus - being the smart guy that He is - KNEW we have a tendancy to forget things.... is it possible that we would forget the gift he gave us in his death on the cross? Apparently Jesus, hanging out with his crew, did absolutely see we would forget the big things. It was just right after that Jesus was telling Peter that he would deny him....
That SAME night - when the rooster crowded three times - the words of Jesus came to Peter's mind - he remembered what Jesus said!!! (Luke 22:61) He completley forgot the words of Jesus as he was denying him. It took the rooster crowing for Peter to hear those words again!!!
Also - you see it again right after Jesus arose from the dead - when the women went to the tomb & the angels told these women -
"Remember what he told you back in Galilee, that the Son of Man must be betrayed into the hands of sinful men & be cruicifed and that he would rise again on the third day. Then they remembered that he had said this." (Luke 24:6-8)
See - these women forgot too!! How do you forget such important things? Because we focus on other things - we're human - we sin!! But Jesus knew how we would be - and asked us to remember Him.....
We get so busy doing things - our lives take over & schedules get over loaded & our minds feel like they are going to short circuit with smoke coming out of our ears....we forget things...
I am so guilty of forgetting things at the grocery - or sending that card I meant to sent - or making that phone call! Ricky forget to shut drawers, turn off lights, take off his socks before he gets in the shower (joking - just seeing if your paying attention!).... but we all forget something all the time
Oh - that we NEVER forget the gift Jesus gave us - that we have the opportunity every day to remember what he did - Saved us from our sins!!!! That we keep him the first thought in our mind where we dont even have the opportunity to forget!!
Thank you Lord for daily reminders that you love us!! We know YOU never forget us!