This morning, Ricky was singing a Tone-Loc song, "Wild Thing" ... (& you thought his long hair made him solely a rocker!) ... & I told Ricky, "He was really great in concert".  Ricky just laughed at me & said, "WHAT?" - Oh yeah baby - I saw him in concert in the height of his career.  When "Funky Cold Medina" was all the rage.  Then we got to talking about concerts that would kinda be embarassing to admit you were there.... I'm all about self-embarassment - so here are just a few of the ones that people are like, "Seriously?  You spent money to see them?" .... come on, you too can admit some concerts you would rather not say you were there... Hey, I was probably sitting next to you...

Probably the BEST of the embarssment comes with a concert I saw not ONCE - but TWICE!  Seriously - I paid money TWICE to see these people.... MILLI VANILLI 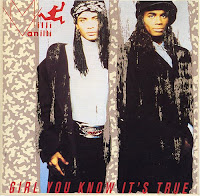 And how did anyone not notice that these people couldnt speak english but could sing it?  Oh, I didnt care - it was a big dance-fest anyways.  Getting my little leg swinging action going on.... They actually were the headliners to a CLUB MTV concert... where also Young MC was singing at... & yes, Downtown Julie Brown was there in all her neon colored glory!

Its also funny now to look back & see that I saw Paula Abdul in concert... Back in her heighs of "Straight up" & "Forever your Girl" .... lets please try to forget the song with a cartoon Skat Kat though (oh mercy)
She totally lip-synced the whole concert but girl could dance her way through the show... 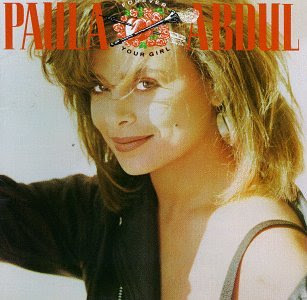 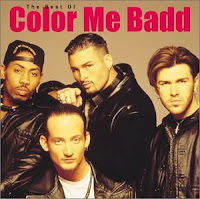 And lets take a turn & BIG turn & bring out another side... I went to the MTV Headbangers Ball!  I'm not even sure how I got tickets to this one, but that was the funniest concert because I went with two of the preppiest guys & we just sat at the top & rocked out in our own world... my neck seriously was sore for a week from literally "headbanging"... And the stars of that concert... Anthrax, Jackyl, Slayer & Megadeth... oh my... my ears are ringing again thinking back...

In the world of my music listening - lets take a HUGE U-turn & think of another concert that I really actually enjoyed... WEIRD AL!  Oh my gosh... dude was funny ... & talented... I would totally go see him again if he came around today!

Another "group" that got its 2nd life in the world of MTV - when they actually played videos - was the MONKEES... & let me tell you - I got Monkee Mania in the 80's... I was in love with Davy Jones.  Which by the way, we have the same birthday... its fate... But I saw the Monkees in concert twice as well!  (& no, they didnt look like this picture... I dont have the heart to put their older pics... even though Davy is still dreamy)

I totally LOVED this concert - it was the DIRTY DANCING CONERT!!!! True Story!  They had the dancers from the movie do dancing to some old songs & "The Contours" were there singing - as well as "Eric Carmen" singing Hungry Eyes & Yep - BILL MEDLEY was there to see "Time of our life" with some generic Baby & Johny doing the lift... I actually had front row seats to that one... & it WAS the time of my life! 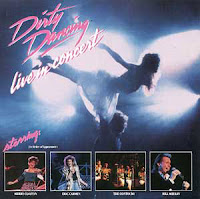 Hey, I went to some great concerts too in the 80's - like Bon Jovi with Cinderella opening up for them... (totally hair band time) & I saw Run DMC in the height of "Walk this way" ...Goodness knows I saw a variety of music...

So, do tell - what concert did you go to that you hang your head when you have to admit it?