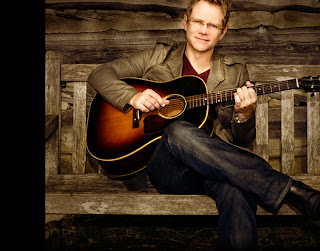 This is probably CD #132 ... its gotta be close... the reason I think its that many is because I have every CD he's made.  Even most of the CD's that have him just singing a song on - like "The Navitity Story" soundtrack.  I'll take my Steven wherever I can get him.

So I was counting down till lunch time.  Afterall, stores aren't open when I come into work at 7 am... & I wasnt about to wait till AFTER work.  Are you crazy?  That's FOR-EV-ER! (I feel like such a teenager saying that).

Noon came & I picked up my purse & was all giddy getting in my car.

I practically am running into Family Christian bookstore... pass the front sales table, pass up all the picture, pass up the books.... oops - hold up... I backtracked.  Found a great book from Billy Graham on clearance for $4.98 that I couldnt pass up & THEN am trotting back to the CD's.

I expect to see a lifesize cardboard cut out of Steven Curtis Chapman somewhere!  Its his new CD release people!... nothing...

The sales lady must have seen my panic because she asked if she could help me.  I felt like grabbing her shoulders & shaking her like the end of the world was coming & screaming, "WHERE IS IT?" Instead I calmly said, "Isnt today the release of my boyfriend's Steven Curtis Chapman's CD?"

I called Ricky & told him I couldnt believe Family Christian Bookstore was shunning my dear Steven like that.  To which Ricky said, "Did you really think there would be a rush on the thing?" ...

Ummm..... of course I did... its Steven Curtis Chapman!  What a dumb question Ricky!

Alas... I now have my CD... am singing along... loving the new songs... digging the "recreated" songs.  I'm in Steven-Curtis-Chapman-Heaven once again!  All is well in the world....