My first visits at the Chiropractor 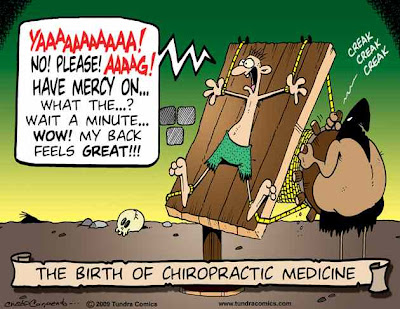 I was leery... wasnt sure this was the smart thing to do.  But pain will make you do things you dont think you'll ever do.  I made an appointment at a chiropractor.  I did have friends that highly recommended this particular one, so I trusted their word & headed to see him.

He poked on my arms, sending me off the table in pain, to let me know that I do indeed have Bicep Tendonitis... I never knew it could hurt so bad... he said it could be a result of running & the repetitive motion of swinging my arms.  How stupid is that?  Running even injures my shoulders & biceps?  that's just messed up!

But he took x-rays & I headed back yesterday to see what the results were.

He showed me how my neck now has no backward-C-shape in it anymore.  Its just kinda straight.  He said it looks like about 10 years of wear & tear on my neck.  Sitting in front of the computer - knitting - maybe even a little bit of whip-lash?

He had me hold a 5 lb ball in my hand, with the wrist backward.  That was easy enough - but tilt the wrist up where you loose that curve in the wrist, & my forearm muscles had to kick in to hold the ball.  That's what happens to the neck & shoulders - it compensates for the curve being lost.  That made so much sense when I felt it in my hand.

He also showed me in my x-rays where my shoulders & hips are off... like a few milimeters of being level.  Doesnt sound like a lot, but apparently, it makes a difference.

The good news - he said they can completely help me & it will take the pain away in my arm in probably 30 days!  YIPEE!!! But that also requires 3 days a week of visits & adjustments for a month... & since insurance doesnt cover it, this is all coming out of pocket.  I was talking to Ricky about it & figuring out the finances of it all, but he said if it helps with the pain, then we'll just figure out a way to take care of it.  I'll be counting my change & rolling that up... is it tacky to pay a chiropractor in rolled coins? :)

I already have slight relief today in my arm after one treatment....

I also learned in my xray that I have staples inside of me too! WHAT?!?!  He asked "You had your gall bladder removed?" - I asked him how he knew - he said, "Right here, there's staples"... I had no idea.  I thought they just sorta stitched that up where they removed it.  Great... I'm going to be nervous about medal detectors now.

I will say, I'm a scared-y cat when it comes to everything there.  I even asked him if its even possible that he snap my neck & I could die.  He tried not to laugh... but hey, it could happen, right?  I've seen plenty of movies where people grab a neck, snap it in a way that looks very easy to do & that person is toast on the ground.  He assured me that I had better odds of getting hit by lightning on a sunny day then him snapping my neck to kill me.  To which my response was, "so there are odds that it CAN happen?" ... he just shook his head at me.

He did do an adjustment on my neck that wasnt too bad... what hurt more was the pressing on my spine & that pop... tolerable, but uncomfortable.

When he was finished for the day, I told him I wanted to buy a shirt that said, "I survived my first chiropractic visit"... he said he needed to have shirts at the front counter to buy.  If anything else in life, I'm thinking of new ideas for people :)

Keeping fingers crossed, prayers lifted that this takes my pain away completely!

Are you a fan of chiropractors?  Does the "popping" bother you?  ... & more importantly, did you die when they snapped your neck?  Zombies, feel free to comment today :)