There goes my chance with Hugh Jackman..

Are you watching "The Glee Project"?  ... If you're not, then why?  Because its amazing.

I love that each week, they do a "video" that is very Glee-inspired.  But it showcases the acting abilities, singing, & dancing (or lack thereof) abilities as well.

One of my favorite contestants on there has been Cameron. 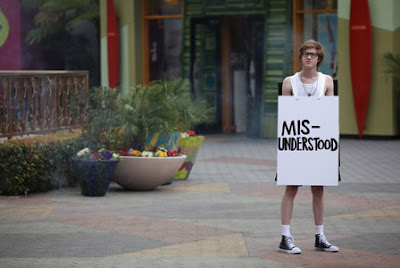 I especially like him because he was very vocal on being a Christian.

Never shoved it in anyone's face - never was like he was better then anyone else because he was a Christ follower ... he just has his morals & he stood by them.

During one of the video shoots a few weeks back, a girl, without him knowing, kissed him at the end of a song.  He felt horrible!  Why?  Because he has a girlfriend.  And this surprise kiss threw him off so much that he ended up calling his mother & was truly upset about it.

Some made fun of him about it - but he was sticking to his morals.

Then came last nights episode & they asked him if he would kiss another girl in the video... he thought about it & said, "No" - he couldnt do it.

He was put in the bottom 3 because of it & then it hit him... this whole acting thing just wasnt for him...

The producer of the show said he actually wanted to keep him on Glee because he's never had a Christian character portrayed on the show (YES!! Please make that character Ryan Murphy!)... but ultimately, Cameron said he couldnt do it.

And then I remembered that Kirk Cameron wouldnt kiss the lady that played his wife on "Fireproof" ...

... that kind of "morals" in these men just speak loudly, doesnt it?

It sounded like Ryan Murphy was going to work with him though on the show & not put him in the position to have to do something out of his comfort zone... so that makes me sad that we may have lost that "Christian character" that could be on the show now...

But I still give the guy props for standing up for what he believes in...