I was reading the other day about someone talking about making a root beer float & the proper way to do it.

As soon as I heard the word "Float" my mind instantly went back to childhood days.

Good ole summer days where you would play outside... because that's what kids did then.  Played outside.  Where there were no video games to keep kids in front of the TV for hours on end with eyes darting back & forth, or fingers pushing buttons & little joysticks.

No, our video games took about 30 minutes to hook up to the TV & then it was just two sticks on either side of the screen & a bouncing ball in between.  & it was fun!

In our home... it was all about the Big Red Floats.

Ice cream with all that red sugary liquid on top of it.  It was even pretty - turning different shades of pink.

I even had a wax candle that was in a sundae cup like you would find in a ice cream store that was the same colors as the Big Red Float... even complete with a wax cherry on top.

Those floats were delicious.

& when I think of food when I was little, I always think of Friday nights.  That was payday in our home & that meant we would usually eat out.  We'd stop by the bank & then drive down the road to the Ponderosa.

Do these places still exist?

That's sad when you can remember salad bars being put into restaurants.

& at the time, it was a one trip thing.  There was no "going back" to get another plate.
That was another few years down the road.

It was such a good treat & I remember going with my parents & feeling like we were the luckiest family in the world to be able to eat there.

My mom always did a lot of cooking when I was growing up too.

That sounds so early to me now, but it was just in time for my dad to get home from work & he would take his shower, get cleaned up & we'd sit down & eat together.

All the good meals mom made.... meatloaf, lasagna, pot roast in the pot that would whistle when steam would come out of it.

It's a good thing I turned into a vegetarian later in life or I'd starve in our home.

Another big treat in our house was when mom would make hand breaded oysters. I loved it so much... even though I would never eat an oyster to save my life.  I was all about the breading.  I'd dip that cracker goodness in ketchup & chomp down until I got to the oyster & then I'd pass that onto one of my parents ... & then keep eating more of that breading.

See... my love of carbs has gone far back into life.

The one food that I always wanted as a child but was never allowed?  Candy cigarettes. 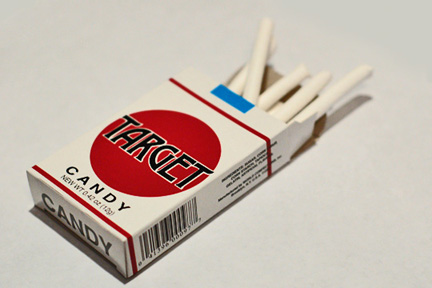 I always loved the taste of them.  A peppermint sort of taste.

But my mother would never NEVER allow my brother & I to even get near them because she said she didn't want to make smoking a 'play thing' or a joke... & she didn't want us to ever think it was a cool thing to even play like we were smoking.

I guess it worked.

Neither me nor my brother smoke... I never have even tried it in my life.  I guess I owe it to never being able to have candy cigarettes.. maybe?

Oh man... childhood was good times... my childhood belly would agree with me.


What was some of your favorite foods as a child?
Was your mom or dad a good cook?
Were you allowed candy cigarettes?