I think my dog is part cat... or has a great guardian angel!

I'm going to start this post off & giving the ending...

Whew... Are you scared yet?

Because I was freaked out of my head Saturday night... & now, totally convinced that angels care about animals as well as humans... or Bruno is basically a cat & is wearing down his 9 lives.

Which may make sense when we think back to this post where Bruno nearly died choking on a bone... Anyways.  Our poor little boy is just having a tough time lately. He's 16, going on 17 - & no, this isn't a repeat post of seeing the Sound of Music this past weekend. He really is 16 & will be 17 in August.  Grumpy Old Man is a legit name I give him. He lives up to it fully.

But with the aging, his sight is fleeting.  & by fleeting, I mean basically gone.  We've since learned he's totally blind in one eye & the other eye must be on its way out too.  He can't see when you put a treat down & you have to tap on the floor for him to come over to it.  Stuff like that.

He must still be able to see shadows or something though because he does look at certain things & he's not run into any furniture or anything in his path yet.

I told Ricky I'm not going to take offense to the times that I talk to him though, he looks at the refrigerator & thinks its me standing there.... bygones....

but he goes outside, we have 2 little steps to get out of the kitchen, he gets nervous about the edge of the steps.  He goes slow.  He's not sure of his footing on the steps.  You can tell his distortion is off.

So we do what we do with all our dogs when they get old. Treat them like babies.
They get the full royal attention. Spoiled all over again.  Circle of life. Back to the main point of this story - I get home late on Saturday.  It was 11:45pm.... Ricky had already gone to bed & I was greeted at the door by the 3 dogs.  I went ahead & took Bruno outside for his nightly potty break - which is a joke because being a grumpy old man, he has a grumpy old bladder & we get up with him at LEAST twice a night, sometimes up to four times a night. Poor boy.  So I thought maybe this would cut down the wake up calls since it was going to be near midnight before I got him in bed.

I went & got on my sweats, washed my face & brushed my teeth & came into the kitchen & saw my little man standing there. He'll surprise us sometimes by actually making it back up those stairs to the kitchen.

I loved on him & told him "good boy" for making the hard leap of 2 steps & then said, "let's go to bed"... which all the dogs know exactly what that means & the race is on to get the best spot in bed.  & yes, I've lost out on that many a night & Harvey Dent is sporting a comfy spot on my pillow while I'm curled in a ball in the middle of the bed.  I'm that dog owner, what can I say.

So I start walking to the bedroom - turn off the light in the living room & go to the bathroom to find my warm socks....

& then hear a noise.

Harvey Dent jumped up & looked & I thought, What in the world was that? ... but really didnt give it much thought after that.

Until I went to the side of the bed where Bruno usually stands waiting for me to pick him up & he's not there. I started running around the house looking for him.  I woke Ricky up yelling. I knew Bruno couldnt get back outside... & couldnt find him anywhere.

Then the noise came back to my head & I was scared to death to look... but I held my breath & turned on the lights at the bottom of the steps... & he wasn't there....Thank God.  I was so afraid he was going to be laying at the bottom of the steps.  Our poor little man hasnt been down those steps in years because 1. his vision & 2. his little old man legs cant do all the steps from one floor to the next.

I made Ricky get up to help me find him.

So Ricky runs downstairs ... & whose in the back dark room, roaming totally lost?  Bruno.... We have security cameras throughout our house... we had to go back & watch what had happened.

So when I said, "let's go to bed" - all the dogs followed me - except when I turned the light out, it must have totally darkened for him & his one blurry eye & he got confused & got turned around.  He ended up back tracking & was the top of the stairs. You can tell he's not sure where he's at....

& while I thought he was still behind me & walking to the side of the bed, he's at the top of the steps... & takes just a small step too far...

Switch to the basement camera... I can't even watch it completely because the first time I saw it, he was just a blur of rolling from the top to the bottom... the sound of it is HORRID... I just saw the white ball of fur, literally flying down the steps & I cant watch it again nor watch the rest of it.

How he just got up & started walking & not even flinching or yelping out- not affected by the least,  He didnt even limp away.  He was 100% fine.  I am totally convinced his guardian angel was laying on the steps padding the fall for him.  Its the only thing that makes sense to me & this poor fragile 16 year old dog.

Oh my gosh... breaks my heart.  Ricky & I felt so bad... I know its nothing we could have prevented but still, accidents still make you feel guilty. & for the record, we had a barrier up at the top of the steps for just this knowing his vision hasnt been great - but it had been taken down during the day... needless to say, I'm about ready to install a gate that is permanent & can't be moved after this.

I told Ricky I think what helped Bruno was that he's so fat & round, he probably did just roll down like a ball.  Which kinda is sad... but a little funny too.

These dogs... they keep us on our toes.
& apparently they keep their guardian angels on their toes as well!

Needless to say, the next day, Bruno got his little 'walks' in some extra doses to keep that 'extra love' going .... he deserved it. 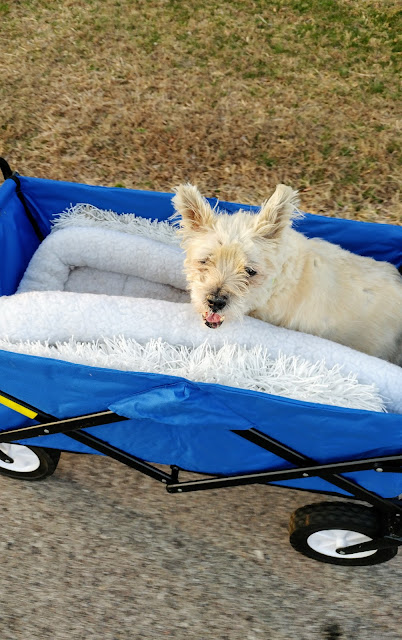 who now gets carried to bed every night!!!