The weekend that was felt like a race all the way through....

That's the only word that applies to this past weekend.
Legit - non-stop.

It got kicked off with a bang on Friday when I missed my first scheduled appointment. Dang it.  We were supposed to go to a wedding - one of my youth kiddos.  It kills me all my youth kiddos are getting married.  They are forever in 6th grade in my mind.  But the wedding was at 7 & a little bit away from us. I ended up not getting home from after work till nearly 6 - which we needed to leave home by 5:45 to make it in time to the wedding.  So we totally missed it & I'm so sad I did.  I thought of my sweet Mandy-Lou all night long.  Lifted up plenty of prayers for her & her new husband.


It is always fine once you get moving - but that waiting to get the start going? Torture. 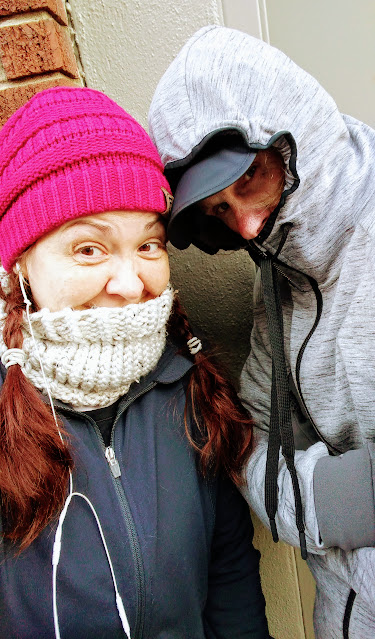 But it was nice because while we were waiting, Ricky saw one of our dear friends. He & his wife used to run the small group from church we used to go to years ago.  They are just the best people.  & he actually used to run but had a heart attack a few years back & this was his first race back in 3 years.  Doing a quick catch up & getting a hug from him did make the waiting time so much easier. 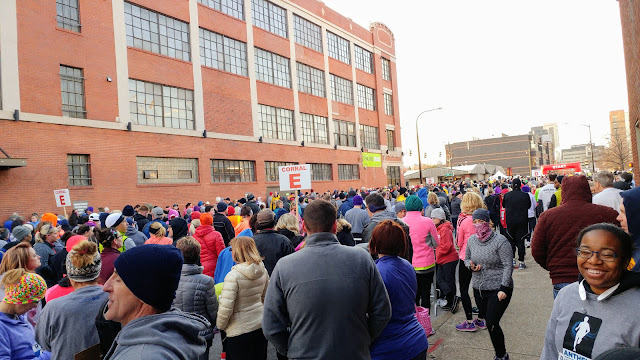 I will say, my time was better than I expected, especially because at mile 2, my stomach just said, NOPE & started cramping on me after I took a drink of water.  I mean, CRAMPED like never before. It made me nauseated it cramped so hard. I'm telling you, that stomach flu has messed my system up like nothing else ever has.  So I ended up having to walk about .25 of the 2nd mile. I was so mad.... but still came in quicker than I thought I was going to. 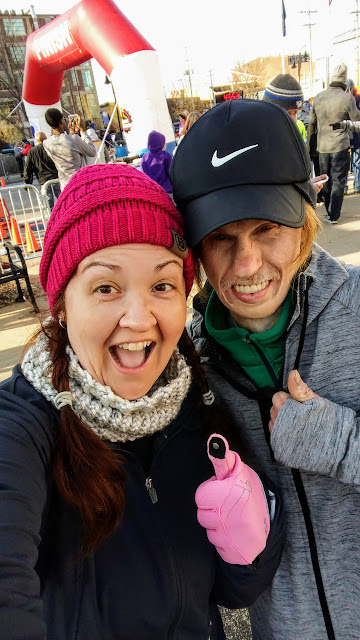 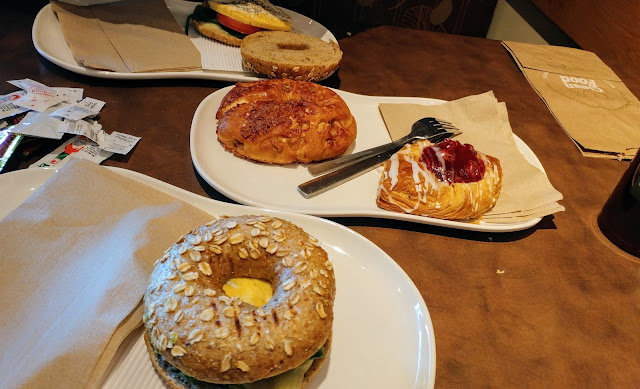 & its so funny to see all the other runners in there after these races. It's always packed of people with race bibs on.

After we left Panera, we saw Family Christian bookstore had their signs up where they are closing. I am so devastated about this.  All the stores - closing shop.  I dont know know where I'm going to find those special gifts for friends & my youth kiddos. 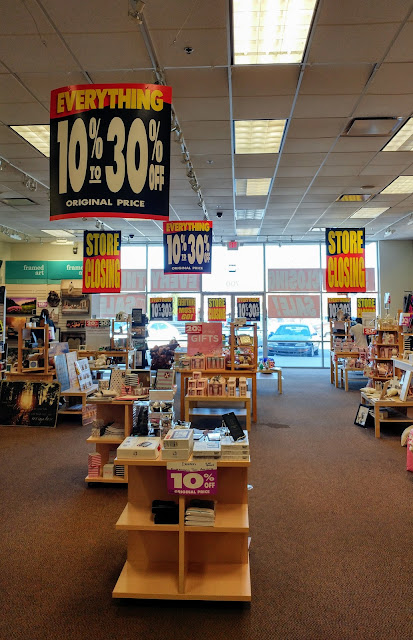 I did take advantage of the sale though & bought something I've always wanted my whole life... the Willow Tree Nativity set.  Like the whole set. Its always been a dream of mine to own - & they had all the pieces for 60% off.  I knew I had to jump on this one time chance. 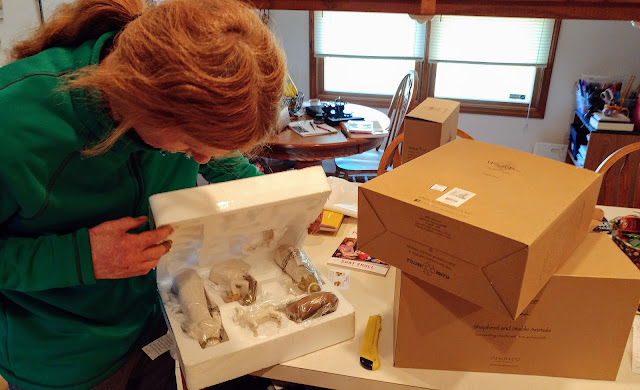 I'm trying to talk Ricky into letting me put it out all year long.

I only had a little bit of time before I had to get cleaned up & head back out so I took my afternoon & played around with my new Brush pens.  mmmm... not as easy as most people make them look.  It's going to take practice to get the thin/thick feel on these things.  But I'm always willing to keep at it. 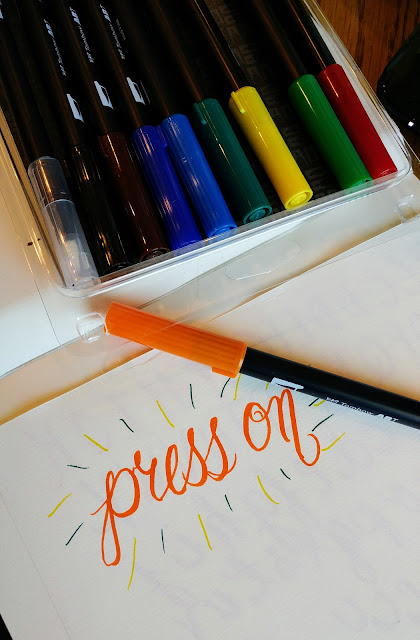 Before I knew it, it was time to jump back in the car & meet up with some of my MSM youth girls.  The high school student that leads with me, she was one of the big roles in her school play, The Sound of Music.  She played Leisel... yes, she's 16 going on 17.  So I checked with some of our girls & had 3 girls that could make it to go support her. I had a few more that wanted to go but they had already made plans & had tickets (our local BBall team was in some sort of tournament that the whole town was pumped about)

I laughed all night long with these girls... we went to McAlisters & ended up sitting there for an hour & a half just laughing & talking. I honestly thought we were there like 20 minutes & then was like, WE GOTTA GO!! We made the play just in time.

& we were so proud of our little Leisel.  She is just PRECIOUS y'all!!!! & nailed it. Her singing voice is amazing. 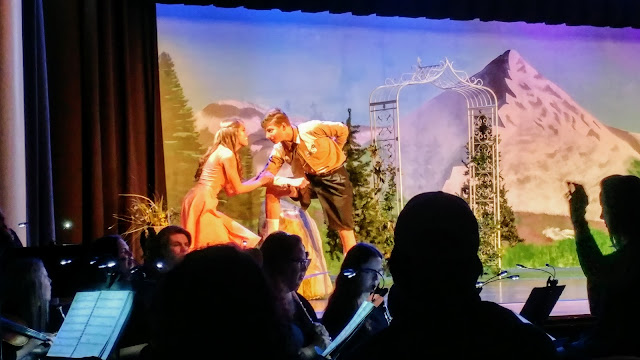 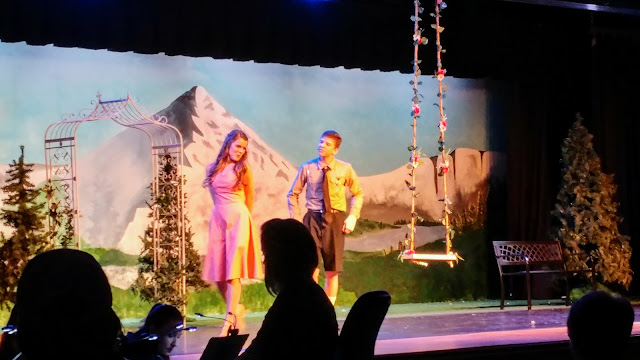 We made sure to congratulate her afterwards & then the girls were ready to keep the night going, so we ended up finding an ice cream shop that was open till 11.  The girls were laughing at my CD collection in my car but quickly handed me my Disney Princess CD & we all pretty much nailed us some Princess tunes. 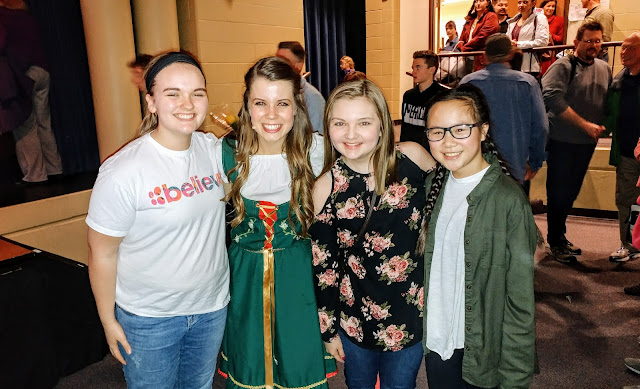 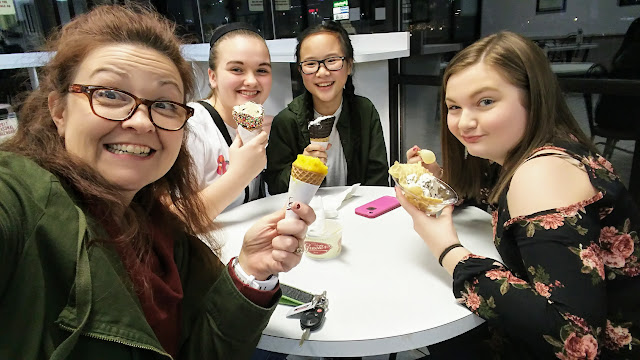 I ended up getting home near midnight... whew... I'm getting too old for this... but loved every minute of it.

Sunday was back at church & what a special day. It was baptism Sunday in our MSM group & there were 4 kids in both services that got baptized. So cool!!!!

& then the rest of the day was different when we got to do these prayer stations that showed the kids new ways to pray.  They get confused on 'how' to pray & put too much pressure on themselves thinking there is a 'right or wrong' way to do it.  So we had these different areas that helped them get ideas on what to focus on n prayers.  Like you can ask God for BIG THINGS.. .He hears!  ... we learned that when you dont know what to say, the book of Psalm has some beautiful prayers that you can use.... & we took time to pray for ourselves as well as praying for others prayer requests in our groups. But I loved the station where they were given news stories from around the world & asked to pray for these situations & then put a push pin where you just prayed for - I loved seeing that map filling up pins.  The world needs some prayer lately.


It was just a cool Sunday with the group. 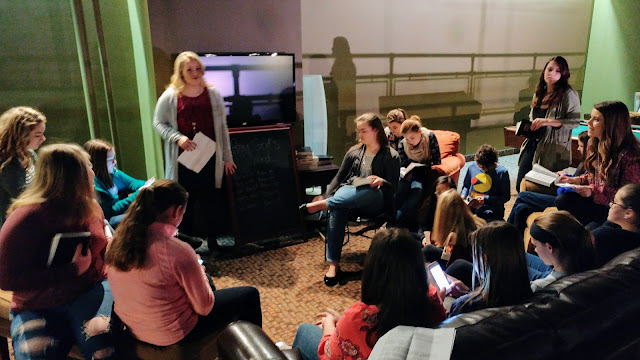 I left from there to meet up with my first photo session of the year.  It was one of my favorite couples... a past bride & groom. I'm telling you - I just adore the people I get to work with & love when they become legitimate friends.  So it was just wonderful to catch up with them & take some pictures of them a few years into their marriage.  Good stuff. & I finally made it home after 4... to which Ricky told me I have been away from home basically all weekend.

Then it was time to get stuff done around the house. Bills.  Cleaning a bit.  & time to edit some pictures now.  Back at that for 2017.

Needless to say, I'm exhausted... in the best way possible. Wouldn't want to miss a thing.  Thank you Aerosmith for that reminder.