The weekend that had me spinning

Here we are... kicking off our first full week in August.  Still can't believe we're nearing the last full month of summer.

Friday, I was ready for the weekend. SO ready.  I had a bout of Vertigo that started Thursday evening & it was still reeling my head on Friday off & on.  Friday evening, it was so bad again, I couldnt hardly stand up.  I get rounds of it a few times a year & man, when it hits, it hits. Its just so miserable.

I was happy to stay in bed with my head down though & start watching The Umbrella Academy Season 2 that started on Friday.  I had spent all last week watching the first season to remind myself of it all.  I'm trying to enjoy the season slow so but I'm loving season 2 so far.

Saturday, wasn't much of an exciting day in the morning.  I got up & cleaned the house & read a little....


it was so hot & miserable still. The temps weren't high but the humidity.  My poor hair was crying in desperation as it was stretching further & further with all the frizz.

It was our day to take care of the horses & they were super low on feed so I told Ricky I would drive up & get some feed & pick up some dinner.


Ricky called a To-Go order for me to pick up & it was going to be longer than expected, so I ran up to the cemetery to visit  my dad. 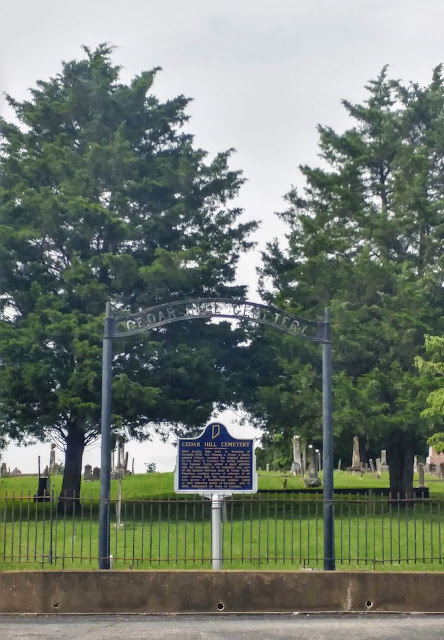 My brother had gotten some cleaner & cleaned up my great-grandfather's headstone  & I wanted to see that too so went up to take a look & just sit on the bench that's right next to them.  It felt much nicer since a storm had gone through.  As I was sitting on the bench, I heard a noise next to me.... I look up & see a deer!!!!  A baby deer at that. Spots & all. The cutest little baby.

I didnt dare move because I didnt want to scare it.  So I just sat & watched as it was sniffing the flowers. Poor thing. Probably thought they were real.  & all of a sudden, I heard a noise again & look up - ANOTHER BABY DEER!  Two of them!!!  I honesty had to cover my face to not laugh out loud at the craziness of it all.

They started venturing down the way & I was able to inch my way to my car to get my phone..... you can see one of them here. 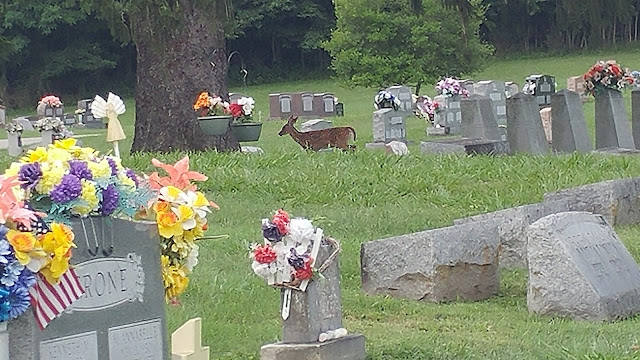 ... you can kinda of make out the other one here too (see his head right next to the Angel on the left) 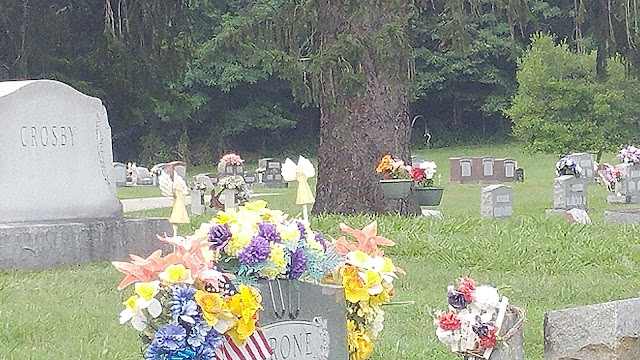 There was a van that had drove in & I guess saw the deer too & they were creeping up on the road to try & take pictures too.  The deer were just having the most relaxed laid back time of roaming.  I looked up to the sky & said, "Good one dad"

... even funnier - as I was leaving - two HUGE HAWKS were flying over head.  Taking nose dives & soaring right around the cemetery.  I was like, what is happening?? It was like I was in an enchanted forest or something....

We ate & then had to head over to feed the horses - right when a belly gusher of a storm came in.  I dont remember the last time I was this dripping wet.  I mean, SOAKED TO THE BONE.  It was the kind of soaked that when I got in the car, I couldnt even sit back in the seat because my shirt was freezing cold on my back.

I didnt get a picture, but its basically just like this.

.... As hot as its been for the past few weeks, being this cold was freaking me out. I was ready for a warm bath & some warm clothes.... & back in bed to watch that show on Netflix about Walter Mercado.

I had never heard of him before this... what an interesting story.  It made me smile but made me very sad too.  But it did mess me up because now, I want to say mucho mucho amor.

Sunday, I got up & had to run out to pick up some things & then headed home to see some visitors.

We last saw these precious little guys around Thanksgiving & so excited to see how much they've grown over the months.  Our youngest little grandsons... growing up so fast! 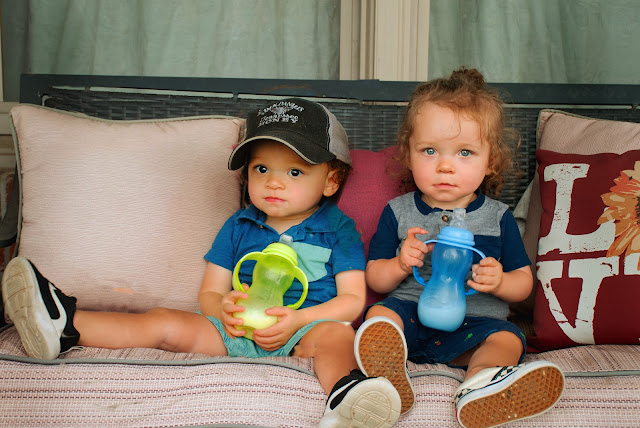 It was really fun seeing their personalities shining through - one being on the go, adventerous, playing & moving on to a new toy every 5 minutes -  the other, reserved, sitting back & watching & taking everything in.  So different - both STINKIN' ADORABLE!!!!

We're so glad that Alaina & her husband live closer now & looking forward to seeing more of them & the boys!

We took them out to see the tree house & they weren't too sure about it.  When Gavin got up there, his little face was like WHERE AM I?  I asked Alaina if he was afraid of heights & she said they hadnt really dont anything to sort of check that.... well, we can say now, he's not a fan.  Look at that grip on dad's arm... 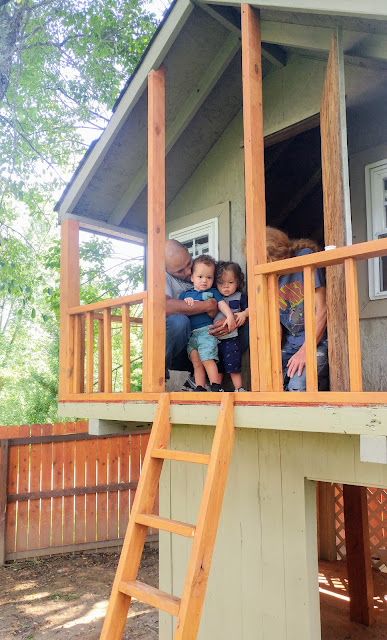 But of course, dad makes everything better & it wasn't long that he was totally fine with it.  They had to watch it because he was ready to just walk right off the edge. When his daddy was on the ladder & telling Gavin to come to him to take him down - he put out those arms & if it was a pool, he would have dove right in.  This one is gonna take on all the challenges. 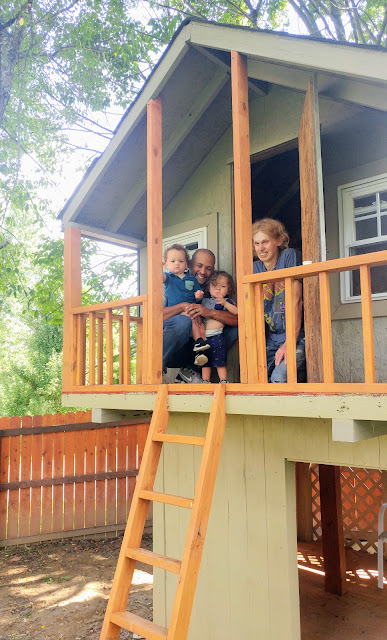 The boys got to go into Ricky's little man cave area & play with all the toys in there too... Start those little boys out young loving a man cave. 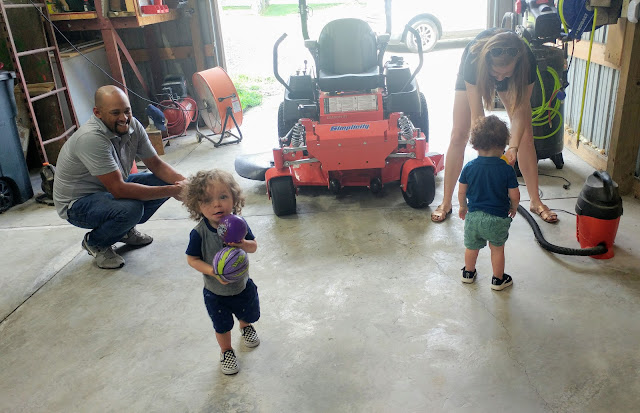 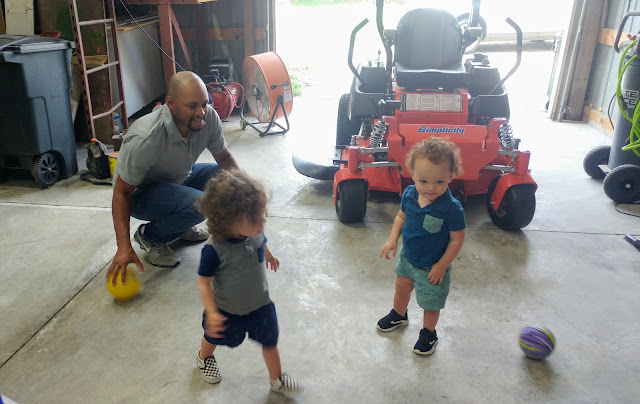 Alaina wanted to play too :) 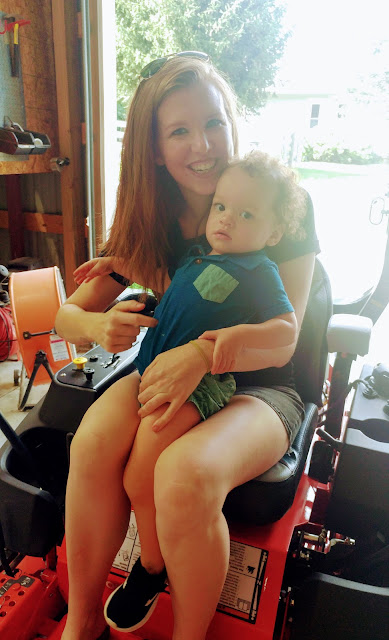 It was just really nice to spend some time with them before they head back home.... 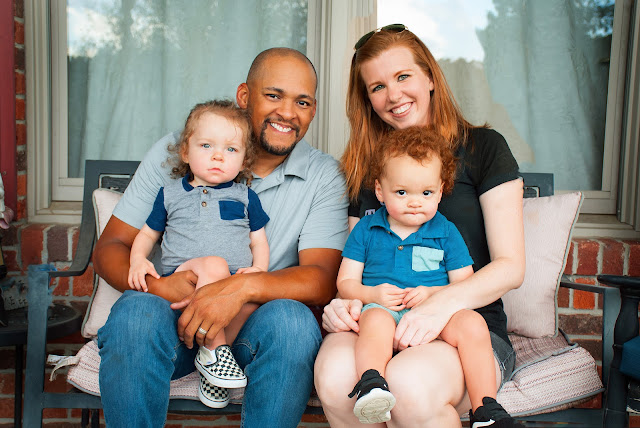 & then, it was time to get everything ready for a weekend to wrap up.  Blink - they go so fast.

Did you know anything about Walter Mercado before the Netflix show?

Do you get to see a lot of wildlife where you live?

Do you deal with Vertigo or have you ever? Know any tricks or tips to make the world stop spinning?