Friday!.... & I don't know what's going on, but this is two weeks in a row where the weeks have gone fast... let's hope this becomes a habit

******
Hold on...
something may be wrong in the universe...
I actually have a weekend where I don't have big plans
WHOOO HOOOOO!!!!
I say that, but my plans are
1. Laundry.. & LOTS of it
2. Running ... its supposed to be nice Saturday morning
3. Wedding pictures to edit
4. Wedding pictures to deliver
So maybe its not "plan free" but it doesn't feel rushed to me
*******
It really feels like summer
Storms every day.. off & on..
Yesterday, it even down poured - I mean DOWN POURED - with the sun out
I feel like we're in Florida
*******
Because of the humidity, I've been doing later evening runs
Felt great yesterday, sweating like a cup of ice water stuck in a hot car
... went to look down at my watch...
NOOOOO!!!!!!

My Garmin battery went dead
Thank goodness I had 2 other gadgets on -
my Fitbit & my Nike App on my iPod
What did we do before we could track every single movement we do in life?
*******
Again, I'll say it
OK - Leave Paula Deen alone
I keep reading where the media has turned this into the story it is
because of the Trayvon Martin case & how they want racial tension to start up
I realize I've turned into a conspiracy believer a lot lately
but it does make sense, doesn't it?
We just live in a messed up, jacked up, screwed up world
Come today Jesus!
*******
Aren't these shirts the cutest?
You can buy one yourself & help support a fantastic family on their road to adoption
I bought a blue one for me & a green one for Ricky
Can't wait to get it & wear it in support!

http://www.naturallycaffeinatedfamily.blogspot.com/
******
UGH!!!!
I have my credit cards automatically deducted from my bank so I never have a late payment.
Good for watching your money as well since I believe credit cards are straight from the pits of hell anyways
But when they are automatically deducted, its like a debit card
- but you get those bonus points & rewards...
I got an email that I had one come out of my checking account that I totally forgot to write down in my register
NOOO!!!!!!......Drats...
That always hurts when you have $500.00 taken out that you weren't counting on
Lesson learned
*******
TV Time:
The Bachlorette:  Why didn't Des just send both of those jerks home on the 2 on 1 date?  I have to say, I was shocked when she sent Ben home.  I thought I saw him in the promos on later dates... but glad to see him DISMISSED.  His reaction in the limo just said it all... but how the other guy was butthead #1 & kept on eating & then looked like "What?" ... when he said he was a lawyer, it made sense.
I'm still a Zak fan!  Glad they're going on a one on one date next week
But my 2nd front runner is Chris...
Next week - more drama when they now have Ben out of the house & need someone else to jump on... hello James!  You're up next in the Dunk Tank.
Real Housewives of New Jersey:  Anyone else think that Joe was asking for trouble going to the gym knowing his sister would be there?  But I loved how he handled her... gave her a taste of her own medicine.
I think Rosie needs her own show... so glad to see more of her this season
Real Housewives of Orange County:  Eddie doing the salsa?  Yes please - more of that.  Dr. Terry Dubrow?  Not so much... I do love Terry & Heather though. I like Lydia a lot too - she doesn't beat around the bush does she?
& keeps trying to get peace back with the girls.  It must have worked - she got Alexis in the same room with Tamra & Heather... even hugs going around.
I loved her comment "I see who you are" to Slade... oh snap... she doesn't hold back from confrontation either.
BIG BROTHER!!! ... YES - its back! 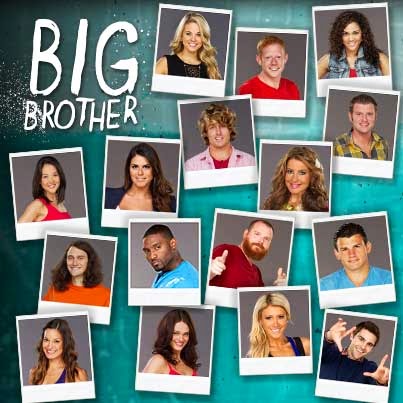 My initial first reactions:
I like Rachel's sister a lot better then I like Rachel - doesn't seem as annoying
I'm liking the Youth Counselor... but remember the "Christian guy" from last year that after 3 days was trying to sleep with all the girls... fail... fingers crossed this guy has better values going in holding his Bible
Rooting for McCrae... love a guy that is different from everyone else - & who no one believes is really a pizza delivery guy (that's hilarious)
Jamie... if I had to hear her say one more time how beautiful she was, I was going to kick my toe in the wall...
I like Helen as well - the cute little political mom
The tall dude with the tats across his chest?  Jeremy - Already on my nerves
Surfer Dude?  Will someone please give him a haircut!
Andy... gotta love a guy who wears a shirt with cat heads all over it to give you your first impression of himself
Just bring Jeff & Jordan back every year please.. I can never get enough Jeff!
******
Alright... enough already.. I got work to do!
Happy Friday everyone!