One of the challenges this week was to tell about a stray animal you took in.... Our stray - ZOE Christeen... Yes, I'm one of those people who gives middle names to their pets -& they all mean something. She's so tiny & neurotic - just like my grandmother, Christeen - hence the name... its all out of love.

So how we did come across Zoe. We were out one night at the Winter Jam Christian Concert. Awesome! Tons of great Christian music rocking the night. It was in January of 2005 (is that right? think so) & we came out of the concert & it was snowing. A drive home & our country roads were covered. 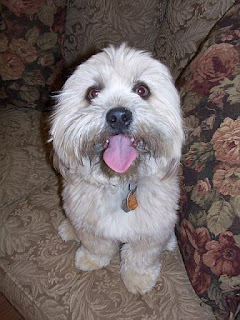 We turned down our road & I made the strangest statement that we STILL laugh about - I said "There's a duck in the middle of the road!".... HUH? Even after I said it, I thought I was nuts.... we got up closer & Ricky stopped & opened up his door. Here comes running in our car a tiny puppy that had snow so caked up on her, she was all white!!! See, the look of a white duck! (I wasn't crazy!)

She jumped right in the car into my lap & was FREEZING cold! Once she jumped in my lap, there was nothing else we could do but take her home. I wrapped her up in my coat & it made me shiver..... poor thing - I dont see how she was alive with all the snow on her & she was so tiny! We got her inside & she instantly ran up to the other 3 dogs & started kissing them like she was saying "HI - I'm home!" - they just looked her at like "What is that?"

We couldnt get the snow off of her & had to run a warm bath & put her in that to melt the snow off. She was just so thankful for a warm blanket & a soft bed.
Ricky was determined that we would find her home because "we already have THREE!" - so he put up signs & there were no takers. After a few days - she won him over & he took the signs down afraid someone would call about her. I dont think her previous owner wanted her anyways - she seems to have been abused. You raise your voice - even to watch a game or scream excited about something - she runs! She'll shiver if she thinks you're mad at her too! Plus, her little legs looks like they've been broke & grew back weird... dont want to think what happened to her before she found us.

And since we just came from a great concert - one of the groups - which I love - was ZOEgirl! And we know that Zoe is Greek for "life" - the name just fit her perfectly!
So there is the tale of our "little duck"