Hodgepodge Time... you too can join along
- just click the button above & visit other Hodgepodgers


1. ARE YOU READY FOR SOME FOOTBALL? The NFL is back in action along with all the college teams. Are you a fan? Who do you root for? If you're not a fan what do you do while the rest of America watches Saturday, Sunday, Monday night, and now Thursday night games?
I think I've watched maybe 2 games my whole life... & those were Super Bowl games. No team favorites - could care less really.

What do I watch instead?  Sunday - Once Upon a Time ... Monday - Dancing with the Stars Baby!!!... Thursday - Vampire Diaries, or now you add Glee!... Saturday - usually catching up on my Real Housewives of wherever.

See - I have more important things in my life other then football :)


2.  What's something I'll always find in your closet?

3. Share one of your earliest memories.
I can remember being in kindergarden.  My aunt owned it & her sister, my grandmother, would come & get me during nap time & we'd run over to a little 5/dime store & get some watermelon Jolly ranchers.  To this day, I dont smell a watermelon Jolly Rancher & not think of her.

4.  What circus act best describes your week so far?


5.  What's a food you disliked as a child that you love now?

Onions ... used to freak out about onions being on anything


6.  Describe your summer in three words.
just another thing

... we dont vacation or do anything special during summer, so it's just another season... hot & sweaty, which is to be expected... so just another thing

I'll never forget it as long as I live.
My coworkers husband called & told her about the first plane hitting the World Trade Center.  We went into the reception area to watch it on the TV & it was just her & I when they showed live the 2nd plane hitting... we gasped & freaked out...

The rest of the office crammed in that reception area the whole day & watched every minute of it... devestating...

8. Insert your own random thought here.

I had to post this picture... thought it was hilarious.

At the wedding we photographed this past weekend, a family member of the Bride caught Chasity & I in action... but for the record, both my shot & Chasity's shot came out great :) ... its the whole reason to have a Second Shooter 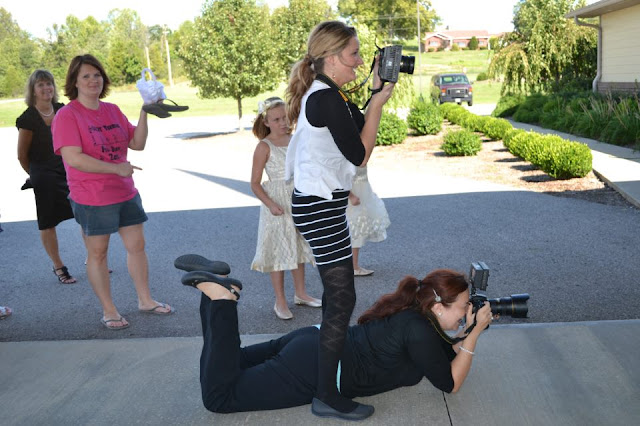