The weekend I was forced to slow down... with thanks to pain pills

I had a lot of plans for the weekend.

But I had 9 miles to run on my training schedule... I was supposed to do a little part of the message for the MSM kids, which I was SO EXCITED about doing because 1. I have missed teaching so much & 2. It was talking about Bible Journaling!!! ... I also was supposed to do our women's JOY Bible Study...I was supposed to take my car & get detailed...  not to mention all of the other stuff I end up doing on a weekend...

& all of that was thrown out of the window.

Let me back up.  Thursday, I told Ricky, I can feel my tooth feeling funny.  I bet the crown is going to pop off again soon.

I should know that funny feeling. That same crown has popped off that same tooth, I think the count is somewhere around 6 or 7 times.  I know the feeling all too well. I just knew it wasn't feeling right.

So Friday after getting home from the grocery & Ricky picking up some Chuy's for dinner, I am sitting on the back porch finishing up a book ... & then all of a sudden, I feel my crown come off.

I just sort of laughed to myself because I thought, "Man, I'm getting good at knowing this"
except I couldnt have planned for what happened next.

See, when my crown comes off, I can always feel the little popcorn kernel tooth underneath. It never hurts - I had a root canal in it - but it's always such a strange feeling with that little nub sticking up.

& this time, I spit out my tooth & noticed it looked funny... & then ran my tongue over the spot & noticed that nub wasn't there.  WHAT IS HAPPENING?

I look at the tooth again & what do I see? My tooth stuck up in the crown 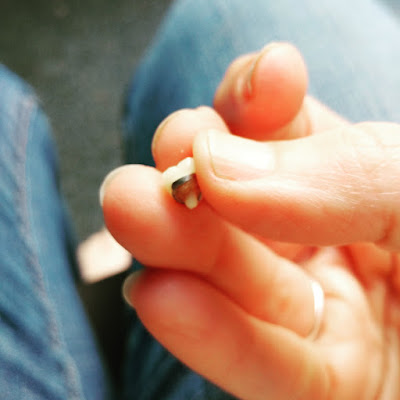 Well, at least that cement they put on the crown did its job this time around - it didn't "Technically" come off the tooth... but the tooth broke off under the crown.

Poor tooth. It's been through a lot of trauma through the years.

But now what? I had a half broken tooth still hanging in my mouth.  GREAAAAATTTTTTT!!!!

Only about an hour after this happened, I had to suck it up & hold it together because my brother & his family was dropping off their dog for us to dog sit for the week while they're on spring break.  I'm loving having 4 dogs back in the house.... Harvey isn't too sure about not being the newest dog in the house... so its been interesting but I'm all for being surrounded by fur babies. 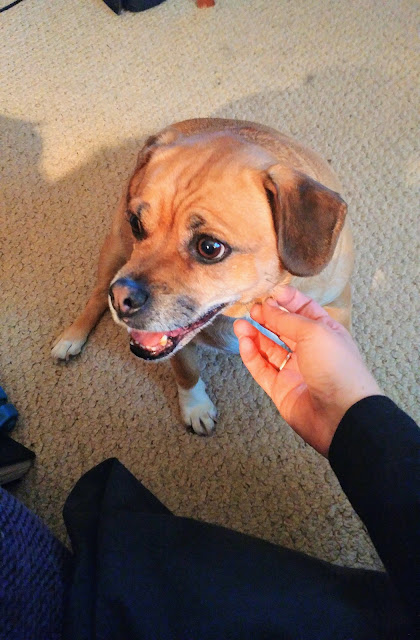 Luckily, I didnt have any pain in this tooth - it was just sharp if I felt it with my tongue where it was broken & the edges were sticking up out of the gum.

I had an appointment for Saturday late morning... & I knew what was going to happen & my biggest fear -having to have the rest pulled out.

I had a tooth pulled one other time... about 20 years ago.  Let me tell you - it damaged me physically & mentally ... it was HORRIBLE. That's why I've since had so many crowns put in - I'll do whatever it takes to save a tooth instead of having one pulled.  So I had a good cry fest before I left to go to the dentist & had to pull it together & act like a real adult.  NO fun.

The dentist said yep, he had to get the rest of the root out but was afraid it was going to shatter since the tooth was so frail as well.  He was right. He got me numb & then the pulling & drilling & more tugging & more drilling & MORE pulling & drillling happened.  He stopped at one point & I asked with an open numb mouth, "ISH ETT OWWTT YEET?" & he said, "half of it"... GEEZZZZZ... it took about 10 minutes of him cutting & drilling to get the entire thing out.


I will say though - It didn't hurt. I mean, its not how I wanted to spend a Saturday,& its not like getting a spa treatment,  but it was nothing like that first tooth pull.  I wanted to hug the dentist ... & I had to thank God because the entire time the procedure was going on, I was quoting every bible scripture I could remember about God being near & no fear & finding strength & joy... Lord speak!

I actually didnt feel bad afterwards except for the gauze I had to keep in my mouth for 3 hours to stop the bleeding... which literally had me gagging.  But they gave me a prescription for pain pills, which I never take because they put me in a coma but the nurse assured me that they had to do a LOT of work in my mouth & I was going to need them.  So I stopped at the pharmacy & got it filled & picked up some allergy medicine too... thanks tree pollen ... & headed home.

I ended up sitting outside for HOURS enjoying the beautiful weather & letting the dogs get used to each other more under supervision. 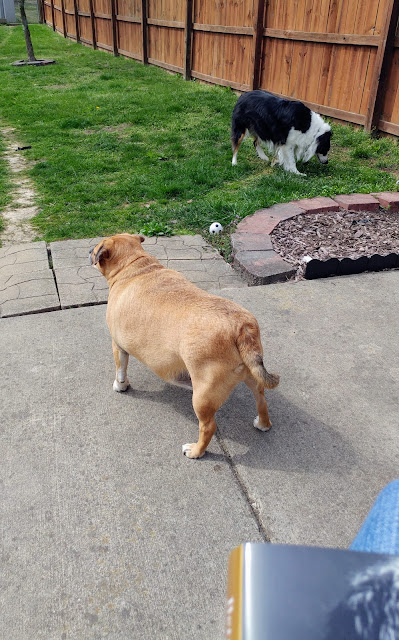 Plus, I couldnt do anything else. I had asked the doctor if I could run my 9 miles which he looked at me like I had 5 heads. Ricky said, "You didnt' really ask that, did you?"... well... yeahhh - the instructions said you couldnt lift weights or anything over 35 lbs - not that you couldnt run.  But the dentist made it clear to me that I was indeed not going to want to run.

... it took a few hours but I got what he meant.  OH MERCY... the numbing shots wore off & I thought I was going to punch myself in the face to knock myself out. It wasn't so much the tooth area as it was the lower gums that were throbbing & aching.  I knew I had to give in & take the pain meds.  I also know me - I get sick when I take pain meds without food & throwing up was the last thing I wanted to do - with pulling out my toenails one by one ahead of that.

But you cant eat with a mouth like this so I headed down to the local gas station to get some ice cream... & found some pudding they had made. Let me tell you - it was the best banana pudding I think I've ever had in my life.  Maybe when you havent eaten in 10 hours, anything tastes like the best food ever... but I downed the pudding & downed the pills ... & then I was down for the count.


I tried to watch a bit of TV & ended up getting through The Vow  (I'm a little behind in movies apparently) but I just felt like I had been beat.... 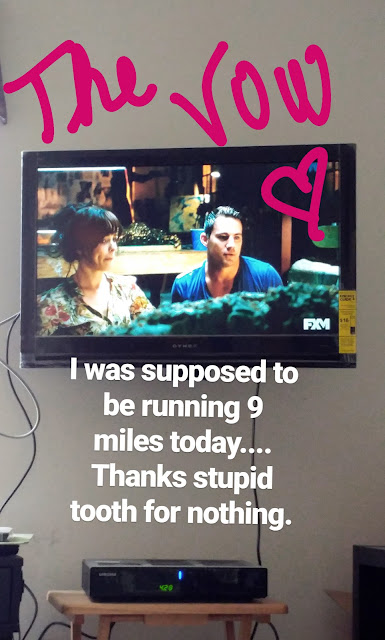 I was glad I slept fairly well through the night with the pain meds & actually woke up on Sunday feeling a little better. The gum pain had gone away, but the jaw pain had kicked in - like Mike Tyson has used my face as a practice bag.  I couldnt even get my mouth open but a inch so there was no way I could get to church to teach or talk to the kids... 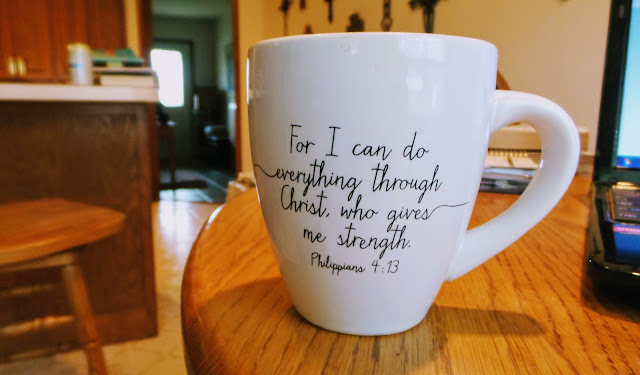 Just reading, eating pudding & ice cream & practicing hand lettering & bible journaling.  What a strange weekend. Not one I had on my planner, for sure.

Now I have to wait for this to heal & then decide on what to do.

The dentist said I can get an implant.. or get a bridge - which freaks me out because helllllooooo - I am a tooth grinder - I make my teeth pop off easily on that side & with a bridge, I can pop not one tooth off, but THREE now?... or he said I can just leave it.  Its in the back, so its not like its really noticeable, though I havent tried eating real food with it yet & know its going to feel so bizarre to have nothing to chomp down on.  At least I have a few weeks to decide what to do. I'm probably not going to do anything until after the half marathon at the end of April anyways. No more, "You cant run" situations until after that.

So yeah, this weekend doesnt go down in the records as one of my favorites... but I will say, it was nice to slow down for a change of pace.

Do you have a bridge or an implant?  Tell me about it...

Anyone else at least get nice weather like we did?