The weekend that was all about nieces, framily & a new baby coming....

Another weekend in October which means it was full ON THE GO....

Actually Friday was kind of laid back  I had to do some grocery shopping & that's just never fun, doing all the putting up of stuff - which is the WORST!!!!

I went into Friday night with a plan of what I wanted to start making for my Etsy store.... & spent about 2 hours making something... & hated it.  It wasnt turning out at all what I thought it was going to be like.... 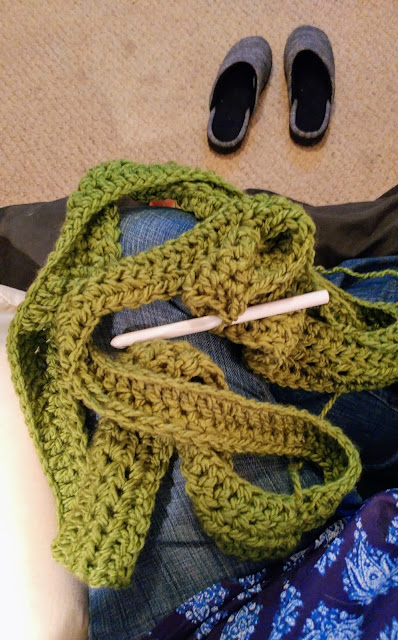 At least I got caught up on The Good Place & the Real Housewives of Jersey.  The important things.

Saturday, I made sure to get up early because I had a lot to do... starting with getting the crock pot going to meal prep Bruno's food for the week.  My crock pot has never been used more than in these past 3 weeks.

I honestly think Bruno's skin is getting better.  Ricky doesnt see any difference. Maybe I'm just doing wishful thinking.... I told Ricky to still give it to the end of October to really see if this works.  If anything, Bruno is totally enjoying fresh meat & veggies.

Ricky & I headed down to Target to get some things & he had to run to Home Depot to get his boy stuff... & I got home in time to take a shower, do my Bible study for the day & then it was time to run over to my brother's house to take the twins their birthday gifts.

TODAY is actually their birthday - HAPPY BIRTHDAY TO THE TWINS!!! 13 years old... can you believe it?.... but they had a sleepover with their friends & was putting their new basketball court to use & I had gotten Madi a basketball that lights up to play at night... & figuring that would be a fun time for her to use, I took it over.... little did I know it was &going to storm all night & they couldnt play outside anyways. Oh well... its the thought, right? 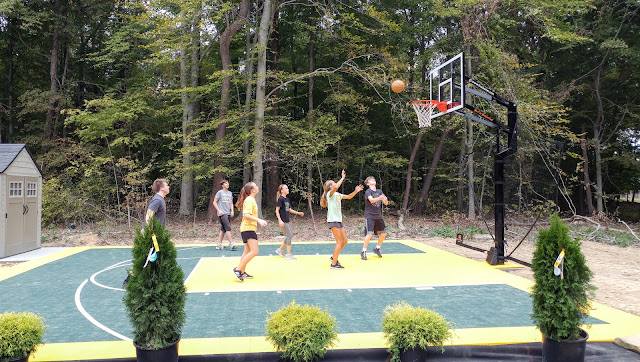 But it was fun getting to play on the court.  Did I even talk about that court yet?  ... so my niece got this court put in from The Dream Factory as her wish as a child with a chronic illness.   Here's the LINK to the news station clip they did on her.... 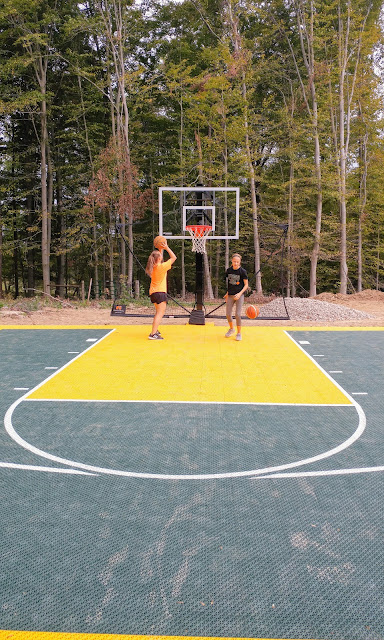 Isnt it so amazing?  & its already been put to great use already.  Years of fun are going to be had on this baby.

I had to jet out from there to go pick up Ricky & we were heading out to pick up some dessert from the best place ever... the Homemade Pie Kitchen. I swear, I havent had anything there that I didnt think was amazing.... 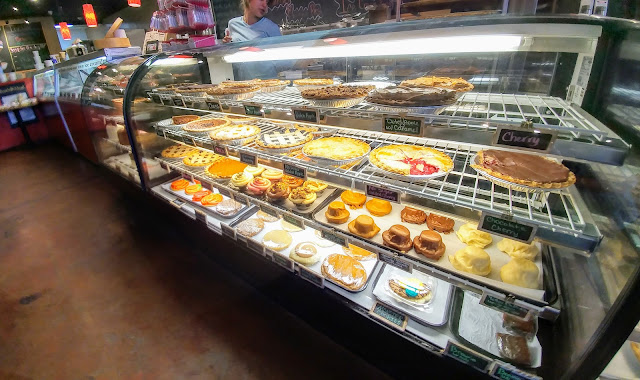 & then it was time for GAME NIGHT at our framily's house.

As soon as we walked in, one little girl was ALL ABOUT HER PAPPY!  She had him in her room playing & then playing hide & seek & then doing it all over again... & even when there was no playing, she just wanted to be near him.  So stinkin' cute. 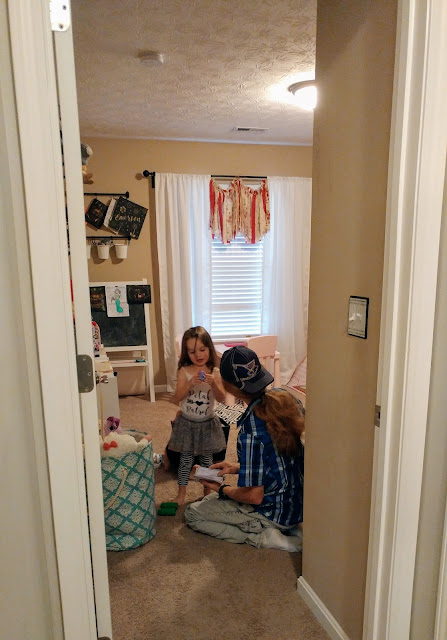 She even whispered to him at one point, "I had the best day with you today Pappy"... oh my heart. 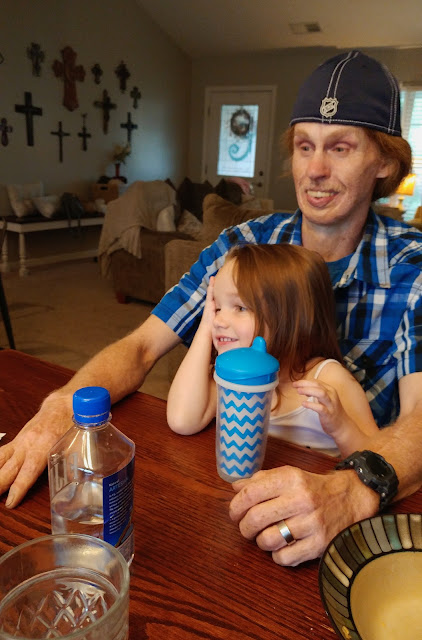 & once again, Chasity & I proved it... we won playing Password - our game of choice with couples - its a good brain game...

& then we pulled out a new game that we found on clearance at Target a few months back... 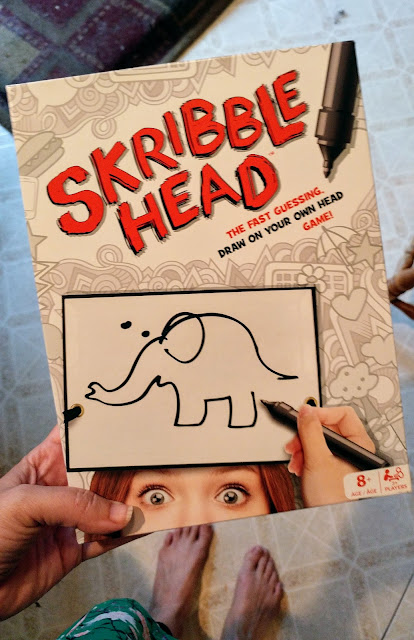 It was way more fun that we expected.  You basically have to draw something on your forehead without seeing what the heck you are drawing.... we laughed so hard at times... & its amazing what you THINK you're drawing & what you actually see on the board at the end. 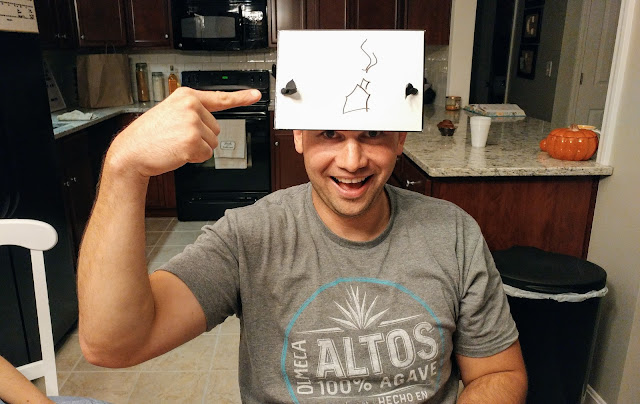 It was so funny because the joke was Chasity could draw one line & I would be OPHTHALMOLOGIST & it'd be right. haha... I really was getting everything she was drawing.  & the guys got mad because I drew a football with apparently baseball type lines on it - but Chasity got it ;) GIRL POWER!!!!

We ended up getting home around 11:30 after driving through an AWFUL storm... & then I had to still package up Bruno's food from the crock pot.  Plus, I was just hyped up from laughing so hard & then stressed from driving in that storm.... I ended up not going to bed till 1:30. Yikes.

Sunday came REALLLLY early.... & then it was time to head to MSM.
It was a great day because I was able to speak on the panel with some amazing ladies... we got to talk about what we felt like in middle school we were called, or named.... but the truth of that situation when we know who we are in God.  Like, how being in middle school can make you feel unworthy, or insecure or unwanted... & when you see the truth of our creation in God, we are so worthy, so secure in our being & completely wanted.  It's all putting that truth of God in our heart to rely on it instead of what others may call you or make you believe.  Good stuff. 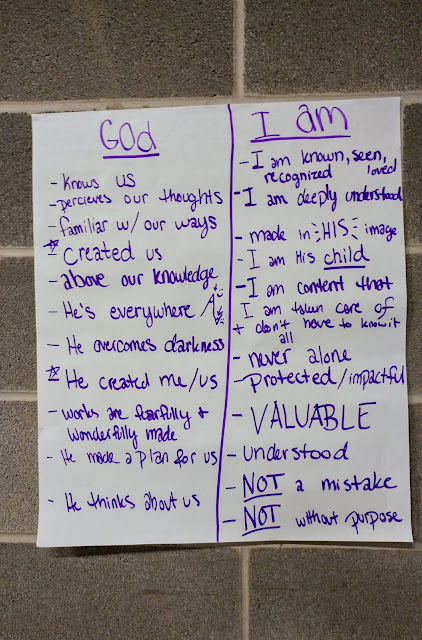 I left from MSM & had to go pick up knitting needles... totally a must... it really was. I have a commission piece I gotta start that I cant find my needles for...

& then it was time to drive up to celebrate our friend's new baby that is coming in January.
SO EXCITED about this baby.  & just loved getting to celebrate with her family.  Her momma is one of my most precious friends I have in my life & I loved getting to just wrap my arms around her & hug on her..... I dont get to see her as often as I want, but my love for my friend never falters one bit. 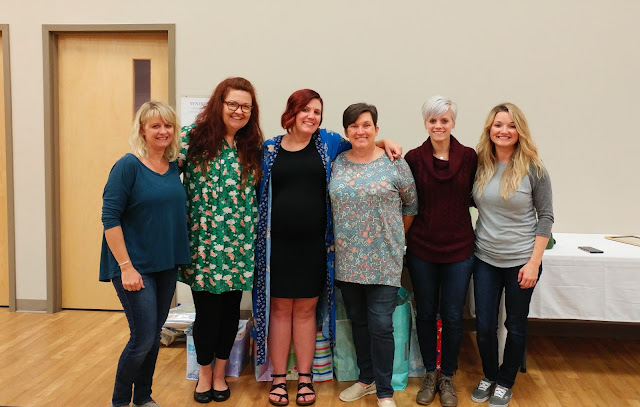 Plus, she's my knitting & crochet hero. Seriously... she's like GOALS.
Here's a Harry Potter Sorting Hat she made for the baby... SERIOUSLY CUTE!!!! 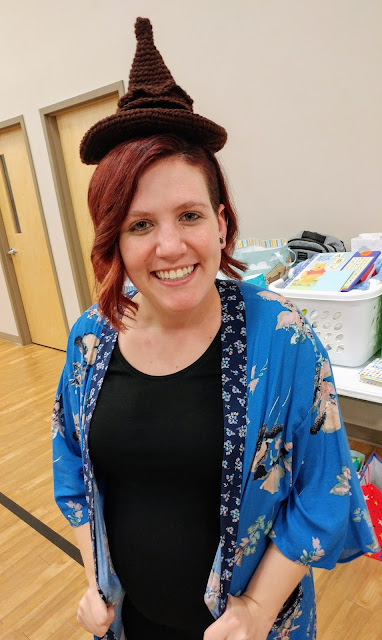 & I didnt get a picture, but she made an amazing YODA hat too. This baby is going to be decked in cuteness.

I left from there & got home around 5 & the cutest welcome ever.  Ricky came running to hug me & the dogs got all excited... they're not used to me being home so 'early' on Sunday.  Our girls bible study is on fall break so getting home at 5 instead of 9 is a huge difference.

I ended up spending some time on my back porch taking in the rain & doing my bible study for the day & just breathing a little bit.... 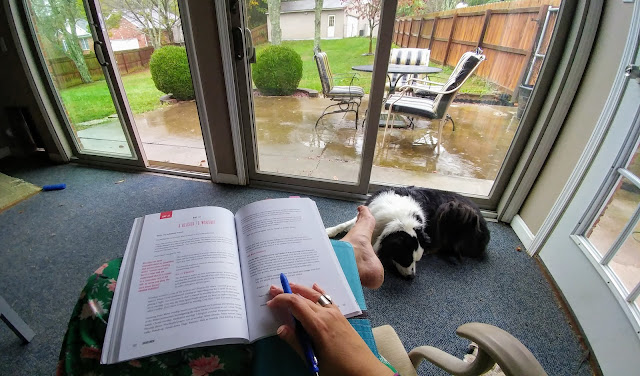 & then it was time to feed the dogs, get ready for work the next day & prep my calendar for a busy week ahead.  It's WEDDING WEEK after all... I'm shooting a wedding next Saturday of one of my old youth kiddos & am just looking forward to spending the day with his incredible family. I love when I look forward to wedding days.....but it'll be a busy week & a even busier weekend ahead.... but we're nearing vacation.... counting down....

Do you hate putting up groceries too?