The weekend we had the SNOW OF DOOM!!!!!

Is it close to Spring?

Especially after we had a huge snow this weekend.   Mother Nature is hormonal... but as being someone who is hormonal herself with perimenopause - I'll cut her some slack. I get it.

I will say, as much as I hate snow, this one was fun.  It was beautiful, fluffy, sticky snow that lasted about 24 hours & made for perfect fun.  Why?  Because the Nashville gang came up & the boys were all excited about the snow.  Ricky may have been a little excited too to have someone to play in the snow with. I got off work on Friday & they were knocking on the door not too long after we got home & ran Ernie out a bit to burn some energy.

The thing is, Ernie got his energy right back when in the door came our new grandpup, Bree.  She's actually one day younger than Ernie - how funny is that?  But they were instantly playing - & basically played the ENTIRE weekend.  With maybe a 15 minute break here & there.  Harvey was happy for the break. Friday, we were all pretty tired so got to bed fairly early & then ready to have some fun on Saturday....

when the snow came in.

We spent the morning in my room & it was fun having all the company. 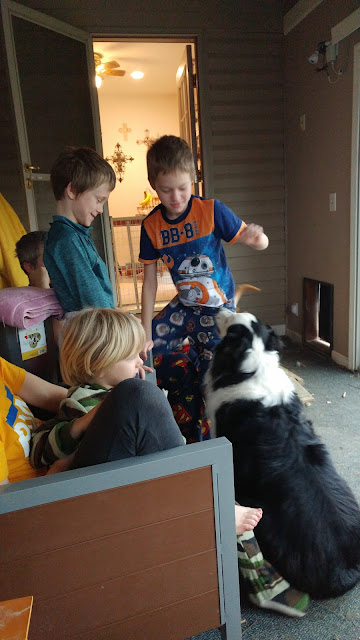 The boys were easily entertained by getting in the dog kennel & letting the dogs run outside of the kennel. The confused looks on their faces was so funny.

But we enjoyed watching these huge flakes fall down & covering everything so fast.

We drove down to get some brunch & MANNNNN - the best breakfast I've had in awhile.  A red pepper & feta omelet - with the best potatoes & the MOST AMAZING bagel. YUMMMM

It was super fun seeing a precious & dear friend there as well - I got to meet her sisters & I always joke to her I want to adopt myself in her family. After meeting the sisters, I really do want to be a part of their tribe.

The boys finished up their breakfast dessert -which was donuts after their breakfast - that's how you celebrate - & Julie & I ran down to the yarn store to look around for a bit.  & let's hear some claps & get some pats on the back because both of us walked out without buying anything. 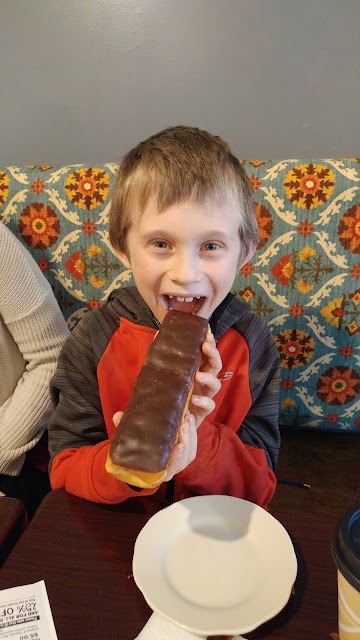 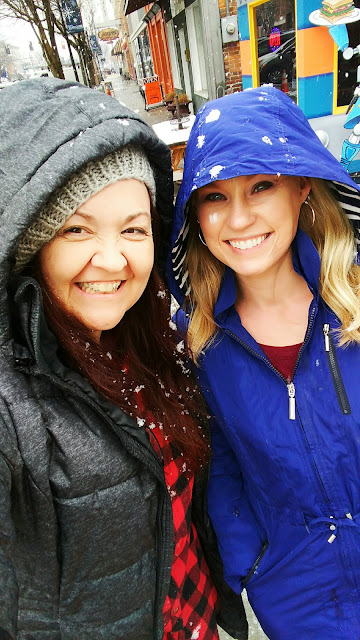 I had to walk them down the alley next to the restaurant since its my favorite & we snapped a few pictures - even in the snow... & then headed home to really play. 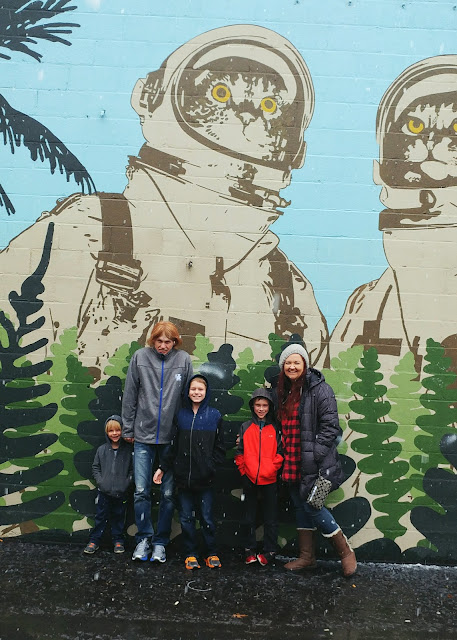 We got out of the car & saw the snow was perfect snow ball throwing snow ... which I threw a few & then ran & got out of the line of fire... but Luke was right on the idea of building a snowman.  Ricky didnt have to be told twice. He ran in & got some gloves & the two of them (Twins anyways) got to work.  Steve & Isaac dug up some gloves & got out there to play too.... It was just fun watching them get it all together.

William stood inside with me & Julie & told me, "I thought I liked the cold. I really dont"... I hear ya buddy. I was asked for a carrot for the nose, Ricky found a hat of his & I pulled out an old scarf I had knitted & found in my closet & he was complete.

Luke was the one to name him - COLE.... but of course, he had to be called the SNOWMAN OF DOOM

Luke told me that he & his best friend add the word DOOM to everything ... & honestly, I had the most fun adding that onto everything all weekend.

I can do this my entire life.

But Luke must have really enjoyed Cole because he just kept looking at him & hugging him. How cute is that??? 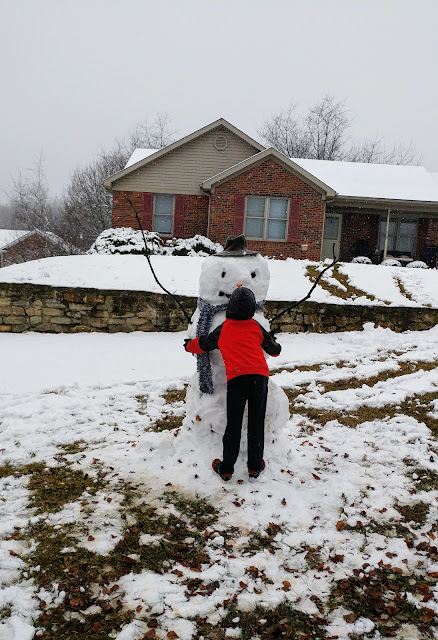 I went in to get some chili ready & was told to come back out to see the boys had made a little igloo.  Boys will be boys, will they not? Everyone came in to finally dry out & relax & it was movie time & hot chocolate time....

& then some fun - FINALLY CHRISTMAS. Yep - we just had our last Christmas of 2017. haha. Maybe now we can REALLLLLY take down the tree?  Seriously. The boys had new things to keep them occupied the rest of the night.

Ricky & I had gone to bed early - or 11:00 - but I guess that was early for the boys because we kept hearing them running around for the longest time.  Energy abound.

So Ricky & I were up early while they all slept & we just got to love on some doggies & sit outside & watch the snow melt.... & then I had to get ready to go to MSM .... it was a bitter sweet day when I had to say a goodbye to someone I really look up to & value their talent.

The gang all drove down after church to meet up for lunch because they had to get home for a sleep over for Luke....

The weekend just seemed to zoom by... fun was had by all....

We ran into Sam's Club to pick up some stuff & then I got home, got the house straightened back up & then it was time for me to go to the MSM girls night time bible study.  SUCH GOOD DISCUSSION.  I love hearing their honest talk on things like comparisons & passions & what they think their purpose is.

& then before I know it, its 9 pm & I'm shocked its time to think about going back to work... because we're not one of those lucky people who get off work on President's Day - BOOOOOOOOO.... So unpatriotic.

Did you get snow?

Are you sitting in your HOUSE OF DOOM or WORK OF DOOM today?