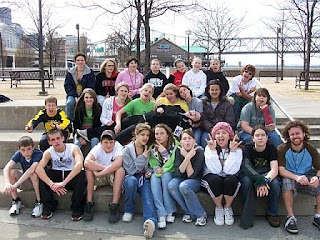 Another youth weekend - SURVIVED! We were able to go with 24 youth & 6 adults to a weekend where several different churches all would gather & hear a message, praise with some great music, & have time to get to know each other & have some GREAT FUN!!!!
The first stop was a church in Marengo where we ended up spending the night & h 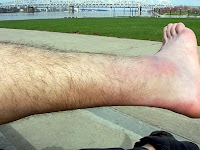 anging out. We weren't there 5 minutes when Ryan (dork!) turned his ankle & was down & out! LITERALLY! His ankle swelled up & by the end of the trip, the bruises were bursting. Its even worse today - poor guy! (The picture doesnt even do it justice on how bad it was!) We had a great message (I'll get to that later) & then the best - a HUGE game of Dodgeball! Oh yeah!!! I forgot how fast those balls are flying everywhere. Some people were binging that ball so hard - I have bruises from it! It was worth it though! The night had all kinds of activites - with sleep being one of the few that was taking place! I think the average was around 2-3 hours (if you were lucky!) 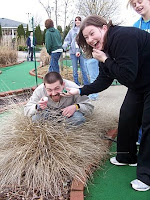 Saturday held so much more fun! Traveling to Louisville, we got to play video games, miniature golf, go-cards, & laser tag!!! Then we had lunch - headed to the Waterfront Park & then onto Georgetown for another lesson. We didn't even get home until around 10:30 - a long, fun, exciting weekend!
I have to say - my stomach was killing me Sunday from laughing! Seriously - I dont think I could have done 1,000 sit ups & been in as much pain! Between the kids & the adults - & not to mention just 2 hours sleep (a little slap happy?) - I haven't laughed that hard in a long time!

The message that was given to the kids, I thought was a terrific one. The scripture that was referenced throughout the 2 days was from Ecclesiastes. But one verse that was originally brought up on Friday evening, I think spoke volumnes & I hope the kids really grasped onto it:
"Remember your Creator in the days of your youth, before the days of trouble come...." -Ecclesiastes 12:1
Man - spending time with these kids, they go through so many trials, temptations, pressures - the things that where never even thought of when I was their age! (Hey - and it wasn't THAT long ago!) But these kids need to get this relationship with their Creator - with God - before they become adults & get even more, serious, harsh reality & problems thrown at them. If they can get their relationships in line with God now - how much easier or smoother w 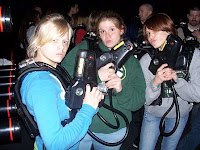 ill problems be able to be handled? No, they still wont be easy or smooth altogether - but it will help! I can't imagine facing life's problems without Him!
So until the next big event - which a Lock-in is in the works - I'm going to get some rest!
And I'm just saying - I'm being very nice because I could post some pictures of our MALE youth Leaders in DRESSES.....yes, dresses!! It was pretty funny! (and if you have a MySpace account - click on the side link - you can go to my page & look at all the pictures!!) Joe, Ryan & Jeremy - I'm not saying anything...I'm just saying....