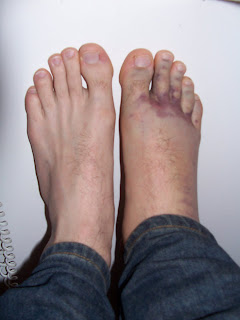 See - this is why physical exercise is sometimes not good for you....

You saw the picture below of the first day of Ryan's injury from All Access - well, when he came over tonight - I gasped! This is the picture of the foot today....

Poor Guy! I know he hates his feet (there's not alot of people who love their feet) - but I told him I had to show everyone how bad his foot got after our trip!

Look at the size of those toes! And seriously - the picture doesn't even do it justice!


And seriously - does anyone know - because we were talking & trying to figure it out - how did his foot bruise so badly? I thought you bruised once you had an impact on your bo 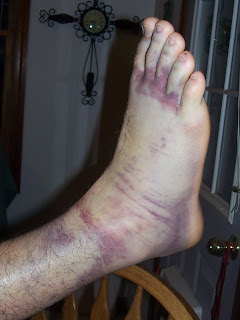 dy - that bruising was from blood capillaries busting. His ankle popped & he said he felt it turn - but I can't believe the bruising that has come from it. Obviously - I'm no nurse!

Ryan also took a huge risk when he came over & I opened the door to have 4 dogs excited to see their friend - plus, he had food in his hand! I told him to raise that foot because they were ready to trample it!

And I dont know if you can tell by this picture - but that is the color BLUE & PURPLE with a nice hint of yellow & greeen . The tips of his toes & the color on his heel is what the foot & leg SHOULD look like! Feeling his pain yet?

Lift up a little prayer for Ryan! He so badly wanted to play basketball tonight with Ricky since the weather was beautiful - no can do though boys! It was basketball that got him in that position in the first place!