Oh - Spring is coming, flowers are blooming, & Dancing with the Stars is back on... The world cant be a better place right now.

I think we're all familiar with who is on the show this year... But as I look at these names, I have to wonder if someone just didnt flunk spelling in their high school years & wanted revenge to anyone who was blogging this thing.  After all, here is some example of last names of the contestants - Lysacek, Scherzinger, Ochocinco, Pavelka...& we're not talking about the Russian pros here.  We even have some wacky FIRST names:  Buzz, Niecy, & the one that bugs me the most, Shannen with an "E" - not an "O"... that just gets under my skin.... maybe that's what has made her so "moody" through her career... she just wants a normal first name.

So I am ready to see these people come out of the gates... lets do this... LIIIIVVVEEEE!!!!

8+5 and Cheryl - Or OchoCinco - or Chad.. I think I'll call him 8+5... my Spanish has paid off!
He wasnt as good as I expected him to be, but I will say, he can dance... he can feel the beat to the music, for sure.. & I cant say anything bad about Cheryl - she's the official spokes person for Jazzercise...And is it me, or does his voice sound a little like Mike Tyson?...Score: seis, seis & seis...

Shannen with an "E" & Mark - Who knew she was so nervous about being in front of people?  Keep the Benadryl ready... or just get her angry & in a fight.  I'm sure she looses all nerves then....curious why they both have on black gloves.  Mark looks like he could commit a crime in the all-black & gloves... Dancing, Shannen with an "E" did better then I expected... & even attempted a pretty tricky move.  But she looked a nervous wreck.  And look at her working the Kelly Osbourne side of her dad in the audience - ahh... he even shed some tears...Score:  6, 6, 6

Erin Andrews & Maksim - Maks... dude has the chics yelling at him... what's up with that?  I guess his engagement breakup has made him even more heart-throbby?....  we get our first taste of fringe of the season & in our favorite Big Bird Color... On the dancing side, girlfriend has some LLOONNNG legs - but I didnt thinks she did all that great.  The judges seemed to think she was decent - but I thinks she has a LOOONNNG way to go... I think the fringe must have flown into their eyes... Score: 7, 7, 7

Jake & Chelsie... Oh ugh... Vienna...& they have the VIENESSE waltz?  Is that suppose to tie together?  BLAH...So the dance is to the song "Kissed by a rose"... at least it wasn't "On the Wings of Love" (All you Bachelor fans will get that)... He did better then I thought he would do, even thought he wiped Chelsie's hair out of place.  The weird moment of the night - Gia, someone Jake LOVED, sitting next to his fiance... awww-wkwardddd!  Scores: 7, 6, 7 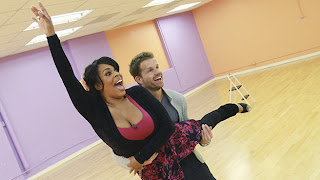 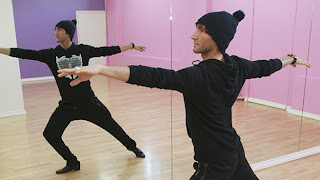 Evan & Anna - If we know anything about ice skaters on the dance floor, we know they rock it.  Kristi set up big shoes to fill & I'm going in this season thinking this guy can pull it out again for ice skaters... Fingers crossed for him!...And no need for it - he was amazing!  So smooth & nice... just wondering if he can pull off the Latin stuff next week... He is such a sophisticated looking guy... Really rooting him.. even though I'm not a fan of Anna... wish he was with Kim this year - it would have been a winning team!  Scores: 8, 7, 8

Buzz Lightyear & Ashley... & I know he's Buzz Aldrin - but how do you NOT call him Buzz  Lightyear?  Dude is a real spaceman!... you gotta give it to the guy, 80 years old?  That's awesome!  And he looks still built & in fantastic shape!  Love seeing Ashley back too - she's just adorable! ....I was so afraid he was going to fall & break a hip though... but I agree with Bruno, how do you criticize a true hero? Kudos for him for even getting out & trying! ... Scores, 5, 4, 5 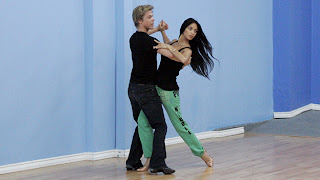 Nicole & Derek... This is the one couple I'm hoping makes it to the finals.  Nicole is a hometown girl who grew up in Louisville so gotta give her a big rooting for.  Plus, I would think she can dance - being a Pussycat Doll & everything.  Isnt that like a job requirement, to be able to dance? .....And she didnt disappoint me in anyway... she was so graceful... & am going to love her & Derek together... Carrie Ann said it "The bar has been set".. but then Len had to go all Mr. Grumpy-mcgrumpison....Wasnt he the one who hated Mya last year too?  Think he has issues with pop singers? .. Scores: 9, 7, 9 (NINES?  AWESOME!!)

OK - those AT&T cell phone commercials are HILARIOUS!!! "A 41 yr man just signed up for Kar-a-te" - nothing funnier!


Aiden & Edyta - From the beginning, when I seen girlfriend in a coat, I know she's almost nude underneath...wanna take bets?....well, she has on more then I thought.  But wow, I'm kinda sad because Aiden is one good looking man & even has an accent - & who doesnt love an accent - but Edyta, it doesnt look like its going to be a mirror ball trophy for you again this year... Scores: 5, 5, 5

Kate & Tony - well, I know most people have been waiting to see this since it was announced.  I know she doesnt have a lot of fans, but I just hope she does decent to make her loser ex-huband jealous!  haha!... well, its what we expected - she's not the best, seemed kinda stiff, & I just dread the Latin round for her...but I felt bad for her when Bruno was smashing her.  She was shooting him the evil eye too... but Carrie Ann is right - she's no athlete - she's not used to "performing" - this has got to be hard for her - so I'll give that to her...Scores: 6, 5, 5
Pam &  Damian.... This girl looks FRIED!  Her hair is a mess - she has looked angry all night - she's throwing rose petals before commercials - this is going to be interesting.  I just hope she knows there is not a pole in the middle of the floor...Oh my... HOT MESS is the only words I can think of.  How could she even see through her hair... wow... the way she acted was really tacky.  I honestly think she is drunk or high or something... I do think though she's definitely going to bring some men into watching the show..Scores 7, 6, 8
So what did you think?  Brooke do good as the new host?  Like the new room where the dancers get no privilege of sitting through the show?  Feel like you need to cover your children's eyes when Pamela Anderson is dancing?