Welcome to "Complaing of the Stars"

We're on week 2 & this week, someone is going to get eliminated.  Could tonight make all the difference for someone? Because apparently, it would have been an "upset" if someone got voted off last week.  Rumor had it, Kate Goseelin was SAFE... are all the mom's out there going to push her through?  We'll see... but for now, we're LLIIIIVEEEEEEE

Up first - Shannen with an "e" & Mark... poor Mark is getting a litlte taste of the Shannen the tabloids like to talk about.  With her cursing at him & telling him she quits, poor Mark isnt even sure she's joking, asking "Are you serious?" - I think Mark just wants to know if he needs to run for his life here...They are attacking the Jive tonight & there's Mark with his Michael Jackson tribute again, sporting the high-waters & doing a crotch grab.  I'm talking more about him because I couldnt hardly bare to watch Shannen.  She looked so uncomfortable.  Her legs were a little off & she seemed to be a beat or two ahead or behind Mark... I personally thought it was a mess... dont see Miss Attitude lasting very long... Score - 7, 6, 7 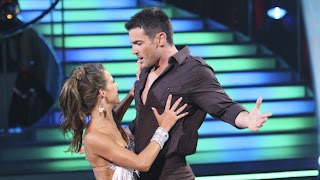 Aiden & Edyta - So during practice, Aiden isnt grasping them moves & we see Edyta get frustrated & actually walk out.  I dont think we've ever seen Mrs. Leg Warmer get upset... he must have been really hard to teach.  He chases after her & talks in that accent... It was like a real soap opera...Edyta gets revenge against him by wearing the ugliest pink dress EVER.  Oh my - looks like a 1970's bridesmaids dress. Then add in a good hit to the face!  Dont make Mrs. Leg Warmers angry!!!!...  They have the Fox Trot & he actually did a decent job though.  The drama & soap opera attitude must work for him... I thought it was very nice...So far, I see him as the move improved of the week (& yeah, I know he's only the 2nd dancer) - Scores - 7, 6, 6 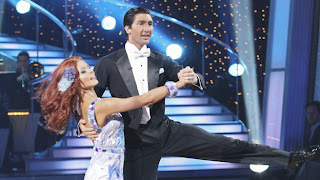 Evan & Anna - I'm still bummed he's with Anna... She just comes across so harsh & just a weird personality... hope it doesnt hurt him in voting.  Evans comes out looking like a T-bird from Grease & he's ready for the Jive.  The one thing about ice skaters - they move so smoothly & have a face that can really work the crowd.  Evan totally pulled it off - I actually smiled through the whole thing & was rooting for him.  He honestly looked so professional... GO EVAN!!!! I want this guy in the finals (even if Anna has to go with him)!!!!  Scores - 8, 8, 8

Niecy & Louis - I loved that Niecy heard Foxtrot & instantly thought she was going to have to pull out her "FOXY LADY"... but instead she learned she had to turn into a white man with Louis mirroring her.  They go that straightened out quick when Louis told her he didnt think she'd be graceful enough for ballroom.  He soon learned, all you have to do is talk about food & the smoothness of butter & he was speaking her language.  I love this lady... we speak the same language!...& mercy me - she was truly like BUT-AH... smooth smooth smooth... I'm excited beccause I think she's going to do so well in the competition... I'll keep saying it - I love me a funny gal!  Scores - 7, 7, 7 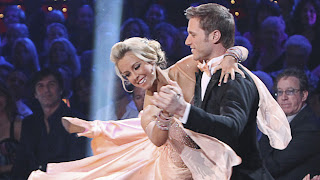 Jake & Chelsea - first.. I'm loving this picture because look at Tim Allen watching them in the audience.  Mr. Allen is probably disgusted too with the choice of Vienna... the face says it all! - We see yet ANOTHER practice where the professionals & the stars are butting heads.  Jake got all manly by saying "I'm not asking, but telling you..." when he wanted a move changed.  Love that Chelsea was all like "shut up bachelor boy - I dont want your rose! You do what I say"... They tackled the Jive & it was rough.  You can tell he was trying... it wasnt the best, but it was an A for effort... just glad that during the dance, we didnt have to hear that nervous laughter that Jake was trying to cover his screw ups with in practice... that was getting irritating.
Scores: 6, 7, 7

Buzz & Ashley - Can I say first, Ashley is the cutest little thing EVER! Why couldnt SHE be with Evan?  She's so patient & gentle & always with that smile.  What a true professional! ... They had the Fox Trot this week & while it again wasnt the best dancing, Carrie Ann is so right when she said its just an emotional tug.  You can feel everyone just cheering him on for who he is - not necessarily his dancing - but just that he's doing this.  Love that Len had respect for Buzz & wouldnt really give him a harsh critique... classy Len.  I applaud you!  Score - 4, 4, 4 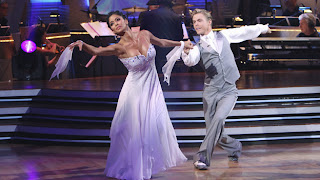 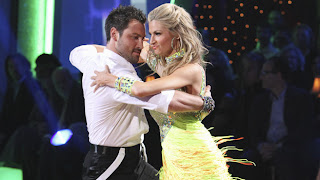 Erin & Maks - I didnt think she was that great last week, but apparently I'm the only one who felt that way.  They get the Fox Trot this time & she convinced me this week that I could have been wrong.  It was such a pretty dance & she totally made me jealous with her long legs.  But had to laugh because it seems like Len is tried of all the celebrities fighting with their professional dancers... Put up & shut up was Lens' advice!  And you know that when you make Maks clap for something you said, you said something fierce.
Scores: 8, 7, 8

Pam & Damian - So people either loved her or hated her... & I think she has pulled in a whole new set of watchers to the Dancing with the Stars family.  Namely, anyone MALE.  And this week, we see Pamela Anderson all cleaned up, looking like Marilyn Monroe.  Can the Fox Trot hold that much sex appeal?  My thoughts on Pam... I think she could be amazing if she would quit TRYING to act so sexy.  I mean, she is a beautiful woman - but she has this way about her that is trying to play that "dumb blond"... & I think that's a shame.  Again, I bet half the people love that... to each his own.  I do think she can dance though... just hate the image she feels like she has to portray to do it... Scores: 7, 7, 8 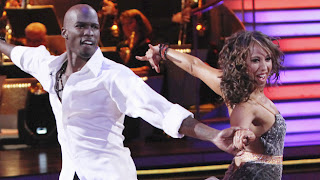 8+5 & Cheryl - We see this man is a flirt & Cheryl eating it up.  But maybe they are focusing more on the giddiness of flirting instead of dancing because they had the Fox trot & wow, it was really off somehow.  He was standing really weird, he wasnt moving very well - it was just kinda bad.  This love story may not last very long at all.... Scores: 6, 5, 5 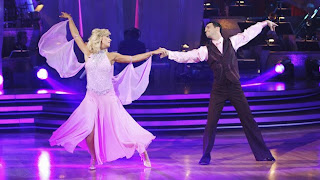 Kate & Tony - OK... forget EVERYTHING about all the other professionals & stars... Kate is thinking Tony is Jon Gosselin & she's breaking out the old Kate we used to watch on TLC... & she's made my poor Tony break a gasket & he just took his mic off & quit?  Oh heck no... Kate - I kinda liked you & was rooting for you - but when you hurt Tony, I dont like you anymore...But Tony comes back & oh my... that dance... I'm almost speechless... I wanna give like her because she's such an underdog, but WOW... its like she doesnt have any rythmn in her at all... I was really shocked  she got higher scores then Buzz though really... Scores 5, 5, 5
So what did you think?  Is Kate going to end up going after tonight's mess?  What do you think about all the stars yelling at their professional partners?  Are you craving butter after the show?  I am... gotta go make some toast before bed....