Ahhh - its story time tonight.  Every dance is supposed to tell a story... I feel like Uncle Len should pull up a chair next to the fireplace & I grab my Snuggie & hear all about the days of long ago where dance was strict & had no lifts, & definitely no fringe...

We open it up to the pros dancing... wait, what night is this?  Results night?  I dont care to see all the pros dance on the night the stars dance... this is just going to make them look bad...even though I do enjoy getting to see a visit from Dmitry.  Come on folks... I wanna see the dancing train wreck that is called Kate Gosselin... 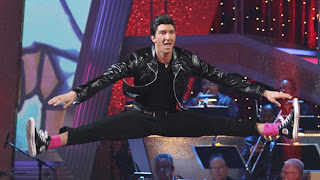 Finally - we are LLIIIVVEEEEEE & Evan & Anna are up!!!  Can I talk about this picture first?  Is there ANY other male star that is competing that can do these splits?  I wonder if Buzz did this move when he was in "no gravity" area...Tonight, their story is going to come from the Broadway show of Chicago & its all good because Evan says "I'm from Chicago"... is there a story about Louisville? - because that's where I'm from.  But Evan is just Quick Stepping even more into my heart.  He's so dang smooth.... (still wish Kim was with him!)...Scores: 9 8 9

Buzz & Ashley - Their story is about a man coming home from war & a daughter waiting for him... THANK GOD they said daughter... I was holding my breath for a second.  I'm even thinking GRANDdaughter!  This story is being told via a waltz... or in Buzz's language... a man standing or walking & moving his arms & letting a beautiful Ashley dance around him & try to pull him in the direction he should walk to next... I do think its sweet he's out here, but I think its time we let the old fellow go home & enjoy the show from a safe-from-hip-breaking couch.  Scores: 5, 4, 4 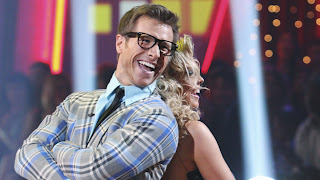 Jake & Chelsie - We see these two butting heads & just my thoughts... I think she too hates Vienna & wants to take it out on Jake for dumping Tenley... because even though Chelsie says she's not being mean to him, she doesnt have that carefree attitude she had with Ty or with Louie in seasons past.  She's pushing Mr. All-American to walk out because he gets so angry... its like Barbie & Ken fighting... something is wrong with that.  I think the thing wrong has a named - & its called "Vienna"...(I'll blame all the world's problems on that chic).  They get the Quick Step & of course, you think of Egyptian times when you think of Quick Step... HUH? ... I will say, Jake did better then I expected - not fantastic - & I am not digging Chelsie with dark hair.  I didnt even recognize her in the beginning.   Scores: 7,7,7 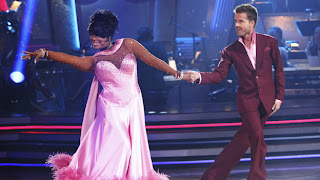 Niecy & Louis - The best line of the night - "I am looking for my love... & I turn around.. & see he's white?  What the Heck?" - but she didnt say heck - but I'm keeping it a family friendly blog here! :) But Niecy does get very emotional thinking of the time where it was taboo that blacks & whites werent allow to be together.  Isn't it crazy how times have changed.  Who even thinks twice about such things?  But I've seen Louis' Twitter this week & his talking about his right to marry & I guess this dance has really got to him as well... The Waltz may not have been the best technically & she stumbled a bit & seemed to loose her footing, but Niecy's emotion just sucked me & I just wanted to tear up... beautifully danced....
Scores: 7,7,7

8 + 5 & Cheryl - The athlete has come out of him after his bad scores last week & he's talking to himself & giving pep talks to his dancing side.  They have the Paso & he's got a lot to live up to with past football dancers paso's... (who'd ever think those three words would be put together - football dancers paso - wow!)... the judges liked it.  I personally thought it was still sorta, eeehhh, but I will say he was better then last week.  Scores: 7, 6, 7 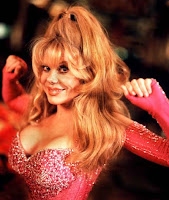 Pam & Damian - I actually enjoy seeing a "human" side of Pam & not the dumb blond stuff, when she said she went home & cried because she was upset about being in the bottom 2.  More REAL Pam!  Thank you!  The story this week is about being upset with a matador & we know Pam is big with PETA so its appropriate.  What else is appropriate in moments like this?  Bringing in CHARO!  How old is this lady?  She doesnt look like she's aged from all the years on the Love Boat!  My favorite thing though, after ALLLL these years in America, we still need subtitles to figure out what Charo is saying!  Gotta love her though!....
They went after the Paso & I dont know much about how it was supposed to look, but to me, it looked like she was loosing her place & her footing... she looked confused.  Maybe that's her angry face?  I thinks she could stand there & Bruno would say she was wonderful.. I laugh at his infauation with her... Scores: 7, 7, 7
Aiden & Edyta - we see that handsome soap stars puke like normal people  - gripping the side of a garbage can with your head hanging low... And excuse me ABC, blurring out vomiting doesnt help - BLUR out the SOUND of someone gagging... (I have to go puke myself now)...  They have the quick step... & I have to say, I'm totally distracted at the mess of the dance by the BIGGER mess of the singing.  OH MY GOSH... I think the guy's voice cracked like Bobby Brady toooo many times... that was horrible.  They need to give Aiden better scores just for bonus of having to dance to that horribleness... Scores: 7, 6, 7 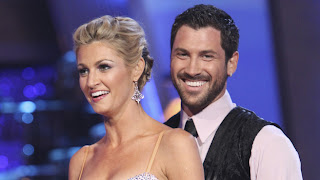 Erin & Maks... I cant help thinking the "saying" from So You Think you can Dance, "Dance for your Life", takes on a whole new meaning with Erin... poor girl... how do you know you have death threats against you but go out so carefree?  I wonder how much of a body guard Maks is... Hey - a remake of "The Bodyguard"... Maks can take the Kevin Costner role... Someone pay me for this idea!...OK - Maks breaks out a blind fold & I'm wondering if this is just a fantasy of his & not necessarily "dancing"? But WAIT - isnt there a blind fold scene in "The BodyGuard"?... I'm telling you - I can be a millionaire here with this idea!
Scores: 8, 7, 8 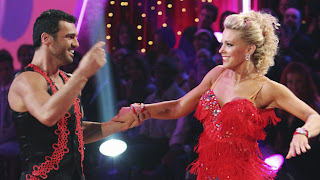 Kate & Tony - OK...say what you will about Kate, but when she lets her human side out & emotion & tears up, I feel bad for her.  I cant help it.  She's a single mom with 500 kids... that would stress anyone out.   Still dont think she's going to be the #1 dancer though.  (Notice I did mention at the beginning her dancing being a train wreck).  Its good to see Tony is all about helping her by bringing in other people.  He's not gonna tackle her alone anymore.  An acting coach is brought in... you can tell when the coach notices Kate doesnt even look Tony in the face, that shrinks everywhere around the world were taking notes & analyzing her.  There's some repressed stuff right there...That was probably the slowest Paso I've ever seen & not surprising, in a word, YUCKY... but she had the Paso mad face listening to the judges... There's the emotion, right there... Anxious to see if she makes it another week.  Scores: 5, 5, 5 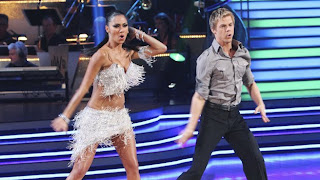 Nichole & Derek....I only have one word for nicole - PERFECTION!  Not only can she dance - she can pull off white sailor pants...Now, my words for Derek! Why would he do choreography that broke rules & just ticked off the judges?  Naughty boy!  And even worse?  That moustache!  What is up with that?  Anyone else a litle bothered by it.  Its not like its under his nose - its on the SIDES of his nose... sorry, its the small things that irritate me...
Scores: 8, 6, 9
So dancing fans, what do you think is going to happen?  Where your ears bleeding from that horrible singing tonight?  Do you think Kate will go or be safe another week?  Did you feel how much Chelsie & Jake are hating each other?  Did your gag reflex kick in watching the show?  Let's talk DANCE!!!