Sarah Palin preparing me for the race? 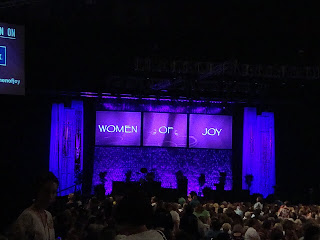 Yep - I saw Sarah Palin... that's about how you can say it because no way could you MEET Sarah Palin!  I had to laugh because before she came out, we were given security directions on about coming near the stage & when she was done with her speech, we had to remain seated for 2 minutes so she could exit the building...

Can you imagine having THOUSANDS of people sitting waiting on you to leave a building?  That's gotta be weird...

Anyhoo.... I've said here before & will say it probably to my dying day, I'm not a political gal.  Dont know much about it - dont really care too either... and I know some political person just gasped.  But I'll ask you, "Do you know how to SSK or PSSO?" ... (Those are knitting codes for you non-knitters)  ... we all have our thing, is my point...

But I was anxious to hear Sarah Palin as she is in the forefront of our country & has a lot of attention on her.  I even saw where some of the things she said at the conference has been on You Tube & brought up news debates on if our country IS a Christian Nation.  People listen to what she has to say, even if its not what they WANT to hear... love she's a Christian woman & people listen to her words... 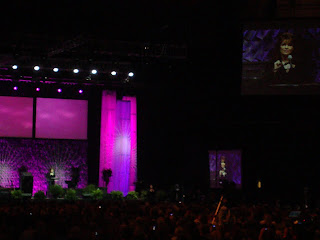 And a Christian, she truly is.  She was inspiring telling the story of her children & the birth of her youngest & the day she found out he had Down Syndrome.  The faith her & her husband had said so much about them.  I loved she wasnt ashamed to talk about her teenage daughter who was pregnant & things that others like to point out as failures.  Hey - they dont have failures either?  But God can take anything & turn it to good & that's what's happening in that situation as well!

But my favorite thing - she was talking about training for a marathon.  How her children told her she was old, but she could do it (that's encouragement?)... she described the way she had to train & the way she felt & I was sitting there shaking my head, like YEP, felt that - hurt that!

But she made a point about the people cheering for her along the way, training and on the day of the race.

"When running & people are there to cheer you on, it pushes you.  You're strength will kick in from some place you didnt know you had any left.  But the true test in your life is when no one is there - no one is clapping - no one is cheering you on.  That's when the true test of your strength comes in.  When its just you & God - in the moments of your life - how strong are you then?"

I totally loved this... especially because after running the mini last year, I had soooo many posts on cheering & how it DOES push you... but how silent it really is when no one is there cheering you on....but thats when you need to listen even more closely, because that's when Jesus is standing behind you, pushing you on, cheering you on in this race of life even more... giving you that strength to draw on to keep going!

Gotta add this one thing she said that I TOTALLY LOVED!  She was talking about how people gave her so much grief for writing on her hand.  She said "I"ve been writing things on my hand for 20 years & I'm not going to stop now!" & then she said told the story of where she made a reporter go look up Isaiah 49:16 & said "Hey if its good enough for God , scibbling on the palm of his hand, its good enough for me!" - I loved she was able to throw in some Scripture!  I bet people who never opened a Bible in their life, went & looked that one up!

And because I couldnt get anywhere NEAR her, & because my camera is pretty yucky in dim light - I wanted to grab a quick video to remember I was in the same room as this woman... even if I did have to sit for 2 minutes while she left the building... enjoy Sarah & her sense of humor in this video!