Its Movie Night in the Ballroom... & hello... you all know I'm a fan of the movie, but wouldnt there be a certain cartoon movie that takes PLACE in a ballroom & does some BALLROOM dancing... hmmm.... A little movie called "Beauty & the Beast".... You could wear a beautiful dress, do a chandelier move...if anyone picked that one, they'd have my loyalty to the very end... but I'm not seeing any gold dresses... sigh... these people will never learn... 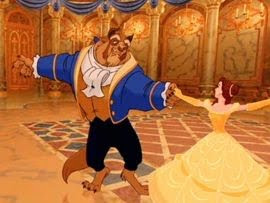 Let's get this movie night on the reel....

Niecy & Louis - I see Niecy has a yellow dress on - not the yellow dress I wanted though... this one has fringe & the bottom is orange & red & we're going with a "La Bamba" feel tonight.  Niecy has been waiting all season to shake her booty, & here is her opportunity with the Jive.  The end was sealed with a kiss & now, I cant look at Len while he's talking because I'm just staring at that lipstick mark on that forehead.  The dance, I thought totally was Muy Terribl-o... but I've said it before, I'll say it again - I still liked it.  You cant watch this lady & not smile & not have fun watching her.  And because she gave a shout out to all the big girls & told everyone she was hungry, something I can appreciate, I may have to give some of my votes to Niecy this time! 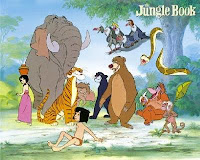 8+5 & Cheryl - my heart stopped a second when they said its a Disney Movie... but alas, we're going to the "Jungle Book" for their dance. I dont remember a huge dance scene in that movie so I'm waiting... but first, we have to see Cheryl play with 8+5's mind.  Honestly, she has to give him the silent treatment & act all cold to him?  What is this 180 turn of personality in Cheryl?  I think she's trying to turn off the "flirting" & seem like "serious dancer"... but I think it may be a wee tiny too late. We get to see Cheryl in leopard print again too... doesnt she wear that at least a few times each season?  Dear Wardrobe, please pull the plug on Cheryl & animal prints... PUL-LLLEEZEEEEE....maybe I'm just jealous because the only animal print I wear is usually Australian Shepherd dog hair....moving on...ummm... a quick step to "Bear Necessities"... five words you probably never thought SHOULD ever go together... I'll just leave it at that...

Eric & Maks - Maks is laying down the rules & Erin desribed it perfectly.  They are like chemicals.  Somedays they mix, other days they like to explode when together.  I just love that Maks finally has someone who gives him a challenge... they should totally get married... on the show... while dancing.... I love they are taking the jive from "Pulp Fiction".  What a great dance scene in a movie!  I just hope there is no jabbing of needles in the chest after the dance, like the movie... (isnt that what happens next in the movie?  I only watched part of it & never finished it...) The dance was cute, but that wig on Erin has GOT to GO! & why is it blond?

Jake & Chelsie - WHAT?  Risky Business?  When I heard Tom Cruise, I thought for sure they were going with Top Gun theme... I mean, HELLO!  A pilot?  "Take my Breath Away"... let me in charge of this show!  These people dont know what they are doing!.... hold up!  Jake starts the dance with no pants on... that is a sight I really dont want to see again!  And is that a first, someone getting dressed while dancing?  usually clothing is being ripped off... I'm so confused with everything Jake is doing!....ughghghgh... Vienna....not sure what dance this was... it was a cute idea - I personally didnt think it was anything special.  Carrie Ann liked it though.  I think she just wants a rose... & wants to go on the Wings of Love... 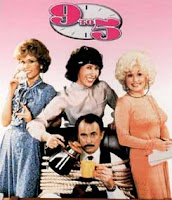 Pam & Damian - OK, that took a genius - to compare Pam to Dolly Pardon.  (There she is in that stupid white chair again!!!! What is up with that?) Tonight is the Quick Step to 9 to 5 - I loved that movie!  I never see sugar substitute & dont think of rat poison because of that movie.  Holy Cow, Pam DOES look like Dolly from the movie!  Isnt that show on Broadway now?  I think we have a replacement star! Pam looks adorable!  See - just my point - she looks more beautiful when she doesnt TRY to be a dumb sexy blond.  The dance was cute & I was really impressed with the standing on the chair & on the table & back down.. I'd break my neck for sure...

Kate & Tony - OK - how does Kate know nothing about "The Breakfast Club"?  What is her dress about?  How does that go with the movie?  What the heck is Tony?  There was not a Don Johnson, Miami Vice characer in detention in that movie.  I'm just sorta stunned with that... Poor Kate looks terrified when she's on the floor... at least she "danced" some...lets be honest, she's the worst one left... but I still feel bad for her & want so badly for her to do well.  I just hate when the judges talk to her... her poor little smile looks so forced & painful.  We wont even go how painful Tony's smiles look...

Nicole & Derek - they are going to dance to "Pretty Woman" & Nicole says that Derek is going to take her & get in the character of the story.  ummm... hello?  Nicole?  Julie Roberts was a prostitue in that movie...I think that's illegal to get in that character.... they have the tango & I smiled when under that coat, Nicole has on the look alike dress to Julie's red dress.  She just needs the big mega necklace!  (I love that part of the movie... "It was so good, I almost peed in my pants") And of course, they ROCKED it... anyone have any doubts?

Evan & Anna - Oh my - the Rumba = hips & poor Evan is struggling with the hip action.  Their movie is Armagedon... I want to see Ben Affleck try this dance... with Jimmy Kimmel...there I go again with my wonderful ideas!  It was such a good dance.  If he & Nicole dont make it to the finals, something is wrong with this world!  He's so fluid & love his long legs... only complaint - who did his hair? He looks like one of the Monkees with that bowl cut!  Get some gel back on that scalp!...but I still love this guy... & because you all liked the picure so much last week of Evan, I found this one for this week... who knew he had a tattoo? 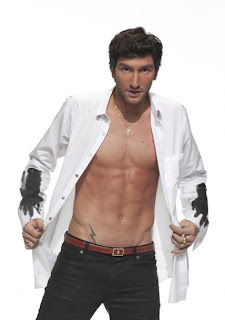 So what did you think?  Did you have your popcorn & milk duds during tonight's show?  Who was your favorite?  What dance scene do you wish was in the show?  And tell me, dont you think the Beauty & the Beast scene would have been the best dance EVER?  You know I'm right!...