The rules of Dancing with the Stars are changing tonight - its a DOUBLE score kinda night.  I think they are just trying to find a way to make sure Kate gets booted... just my thoughts...Its the Rumba & Tango night, so I'm expecting a lot of sexy moves, which means Bruno will be in full force with his comments.  Let's get this show on the road... because we're LLLIIIIVVVEEE!!!!! And because they are giving two different scores, which I STILL dont understand, even after the explanation, I'm just leaving that part out tonight.  What is this?  The Olympics that we need a techincal & performance scores?  oh geez....

Erin & Maks - Poor Erin is taking the criticism from the judges & taking it all to heart & just focusing hard on what they said in the past.  And its just making her tense & tense is causing her pain... she has some back pain.  Time to call in the doc & have it checked out.  Ends up, its the result of being a 6 foot Barbie look alike!  No one that tall & beautiful will make it out of life with no pain... or so I've heard.. I'm not 6 foot, nor do I look like a Barbie.  Maks & Erin take on the Tango & I thought it was nice, but the judges were kinda harsh.  Dont they know that is just going to make her next week even MORE stressed... those dang judges are just playing with Erin's mind now... 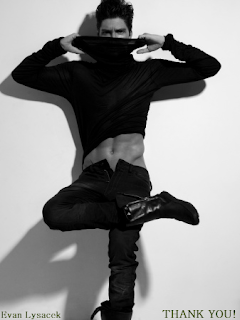 Evan & Anna - Isnt that an amazing picture of Evan?  Who knew ice skaters had abs like that! ... The judges have gotten in Evan's mental game now too with his feet work.  Cant the judges just give a score & quit adding the pressure?  Here we go with another Tango.  And honestly, I thought he looked like a pro!  I just love this guy... hate the music they gave them (doesnt it feel like the music is really on the downside this year?). The judges loved Mr. Abs this time around though... I guess that shows how an athlete handles criticism... IN YOUR FACE JUDGES!!!

Niecy & Louis - So Louis wants to dedicate this dance for Niecy on the passing of her brother.  Kinda dont understand it since its supposed to be the "passion" dance... huh?  But guess its tapping into her spiritual side & getting some emotion into her moves...Oh, this song! "Taking Chances" -  They sang it on GLEE!  And GLEE starts back tomorrow... cant wait...oh, sorry - back to the dance.  Again, not the best dance... I'm not sure she's ever going to give the BEST dance of the night... but you cant help but just LOVE this gal!  The judges are harsh on this one too & I think the look on Niecy's mom says it all.  I bet security was ready for her to jump up... lady looked MAD!!! That'll be some emotion shown right there! 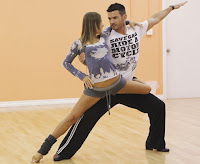 Aiden & Edyta - Aiden gets the love dance of the Rumba & he gets to put all his soap opera skills to work.  And we find out he's nervous about it.  What would make him nervous about dancing with no shirt on in front of a bunch of soap opera crazed women?  He's earning his dancing shoes the hard way.... Lady Legwarmer once amazes me in the clothing.  She defies gravity with material.  I dont know how it stays on & keeps areas covered... once again, the cute little Aussie accent is about the best thing of the night for Aiden.  He just didnt seem to "feel it" for me...the judges are once again HARSH... what's the deal tonight with them?  I think I know 3 people who need to get some wine or drinks before a show starts! 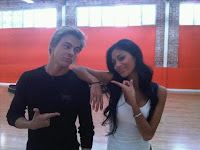 Nicole & Derek - I love these two together.  You can tell they just have fun together, even if Derek has his "love hand" close to Nicole's face.  (What is he TALKING about?) And while Derek likes to say Nicole loves him, I think Derek loves her just as much.... & did anyone else think she looks just like Kim Kardashian during practice.  I did a double take.  At least she doesnt dance like Kim... just saying... you all know how bad that girl was in seasons past.  I love how Nicole had the giggles at first.  And SURPRISE, the judges were complaining again... geezzzzzzzz.... but I thought it was beautiful!  Showed how beautiful she is & how flexible & how long her legs are... oh my... & WHY all the talk of "sliding doors"... which I loved that movie by the same name, with Gwenyth Paltrow.  Anyone else see that movie?...I think I have ADD tonight..

Jake & Chelsie - Jake is having problems with the VIENESSE walks?  Is that foreshadowing... his "girlfriend" Vienna????... I'm just pointing out things that others may miss here....I've been seeing on Chelsie's Twitter all week, comments about how her & Jake REALLY get along... I think she's pushing it way too much, which tells me she hates the guy.... I do love that Jake says "Gosh Dang it" when he messed up though - thats what I say too! ... They attacked the Tango & Jake actually did pretty well... until he slid & almost busted his butt!  Dude was spinning up, around & down stairs no problem, but walking across the floor, & he blew it... my response to that "Gosh Dang it!" 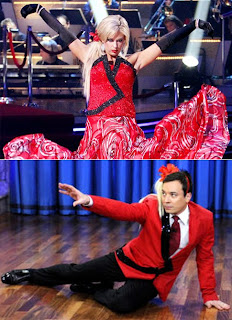 Kate & Tony - you all know this is what everyone waits for all night.  I'm STILL laughing from Jimmy Fallon's imitation of Kate from last week (Thanks Auburnchick for the heads up!!!)... We see Kate struggling again & Kate talking about the media & Kate crying... I'm trying to root for the gal, but isnt this the same back story from every week?  ... They got the Tango this week & she actually looked like she did more then WALK... I see improvement!  WOW!  I hate her face shows no emotion while dancing though.... And what happened to Erin after Kate finished... was she so thrilled for her buddy?  I think the whole room was shocked that improvement was POSSIBLE! ... I'm just praying Jimmy Fallon imitates this one too!  Please Jimmy - make it a weekly thing!

Chad & Cheryl - These two are definitely the FLASH couple of the year.  Going to be dating for a few months but we'll see a FLASH & it'll be over with, but he is too funny showing his romantic side, while dragging Cheryl across the room (or more like bouncing her across the room) & putting his whole hand across her face... I loved how he was showing off his hips to Cheryl & you see her in the background texting & not paying any attention to him at all.  So much for romantic.  The judges finally loved a dance... I really didnt think it was as great as Nicole & Derek... We find out the ring Chad gave was for all the hours she has to put up him... I'm going to tell Ricky that I deserve a MAC-DADDY ring for dealing with him for YEARS!

Pam & Damian - when I heard Rumba, I KNEW they were giving Pam that dance & I knew they'd save her for last.  I love that Len told her to "REFINE" her dancing... Thank you Len!... why are all her interviews in that weird white chair where the lighting is horrible?  And WHY does she say a thousand times, "I want to do it again... & again"... its getting on my nerves, again & again.... I thought it was OK, didnt think it was special or the best of the night, but the judges have taken a turn for Cheer-ville the last part of the show.

What do you think Dance Fans?  Thinking the judges are all wacky with their critiques?  Wondering what the heck all the chains on Tony & Kate were about?  Thinking ALL the stars & their pros are dating on the side?  Most important, who do you think is leaving the show?  Think it'll finally be Kate? Let's talk some dance!