For those of you that got a Wii for Christmas, you've either seen me drool over your console, or you've heard me whine over your blog or Facebook that I am nothing but jealous.

Then last night, the greatest thing happened... in walked my husband through the door.  NO - that's not the greatest thing that happened - he does that everynight.  But he walked in carrying a bag... & inside that bag?  A Wii!!!!!!!!!! 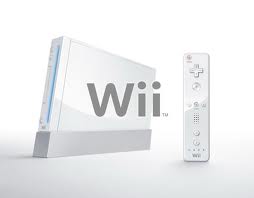 His sister & brother in law bought one a few months back but found that they dont ever play it - they are more prone to play their xbox, so this was just getting in the way.... so they asked if we wanted it for a great deal....

um... hello?  I've had drool hanging from my chin for awhile over wanting one... of course I wanted it.

And what made it even better?  They threw in Michael Jackson - The Experience Game...

So Ricky fell asleep early & I couldnt wait - so I pull up the manual online & figure out how this little contraption works & in no time, I was playing a round of tennis & bowling & getting ready to do a round of boxing.  But then I could feel the King of Pop calling my name...

I had to laugh that the "level" on THRILLER is labeled as "Inhuman"... no, I didnt even attempt it... 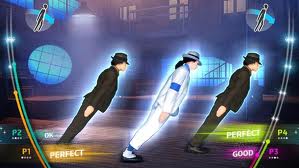 (You should see me attempting this move... We stand at what?  A 90 degree angle?
I lean to probably a 87 degree angle... awesomeness right there!)
Oh yeah baby... I got the moves... was addicted to "Smooth Criminal".... & the whole time, Ricky was asleep on the couch

This morning, as soon as my eyes opened, I said, "I dont want to work today - I just want to dance to Michael Jackson"

Ricky looked so confused & said, "You were REALLY playing last night?" - he didnt know I hooked it up on my own. (Yes, he knows I'm really ill-equipped when it comes to anything technical)

I told him about the songs I kept playing over & over trying to get them down  & he was like "Whew!!! I thought I was dreaming you were dancing to Michael Jackson"

Me dancing Michael Jackson has GOT to be the best dream he's ever had! :)

So Wii owners... what game MUST I get?  That I cant live without?  I already know I'm headed out to get the "Just Dance" & probably the GLEE Sing-along games. I just want a microphone.... yes, I'm a 13 yr old girl inside...